With Evenicle literally being an RPG about marrying several people, I should probably devote some time to at least one of said spouses, shouldn’t I?

Today we look at Ramius Dreissen, better known to many around the world of Evenicle as the “Loner Knight”. She’s one of the first characters you encounter in the game, and the first wife protagonist Aster marries as part of the story.

She also looks a tiny bit like Miyabi from Senran Kagura thanks to Nan Yaegashi’s distinctive art style,but rest assured — she’s very much her own character in her own right. 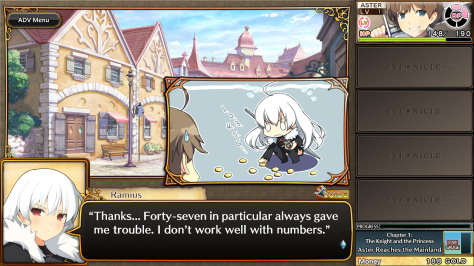 Ramius is introduced as a somewhat awkward character, keen to do the right thing but not terribly bright. One of the earliest events in the game sees her challenging Aster, who has recently washed up on the shores near the town of Abel, to collect a certain amount of gold to prove he isn’t an Outlaw. Upon successfully accomplishing this task, Ramius has rather more difficulty counting the coins than a woman of her age and stature probably should, making it apparent that despite her imposing first impressions, she is endearingly flawed.

Ramius isn’t played off as “stupid” comic relief or anything, which is kind of refreshing. She’s simply presented as someone who perhaps hasn’t had as much education or isn’t in possession of quite as much common sense as some other people you might care to mention. It’s unfortunate that this latter aspect in particular has led people to regard her as a bit of a liability, and for her to develop a reputation as someone you really don’t want to partner with if you don’t want to get hurt. Thus, her nickname of the “Loner Knight” was born.

During an early dramatic confrontation in the narrative, Ramius finds herself injected with a potent drug named Adan’s Blood, which will eventually leave her all but incapacitated with sexual desire unless she receives relief. Not wishing to see her “forced” into sexually assaulting someone and becoming an Outlaw as a result of Mother Eve’s divine punishment, Aster takes it upon himself to spend the night with her until she’s completely satisfied and the drug is purged from her system. Because of the way Mother Eve’s blessings work, they become married as a result; Aster was fully aware that this would be the consequence and accepted it fully, even though it put him further away from his long-term goal of being able to marry his adoptive sisters. 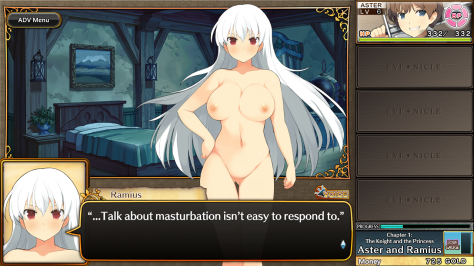 Ramius gradually comes out of her shell once she becomes intimate with Aster. The cold, aloof Knight we first encountered gives way to someone who, while not always fully understanding everything that is going on — particularly if it involves complicated politics, as in the second chapter of the main narrative — is always honest, is always true to her friends and family, and is remarkably open about the things she enjoys and the people she loves.

An interesting example of Aster’s acceptance of Ramius comes shortly after the pair are married, and they go to meet Ramius’ brother Acheval. Acheval, who has long had a bit of a sister complex and a taste for teasing Ramius, reveals some of her “shameful” secrets, such as her substantial pornography collection. Ramius is mortified at this being revealed, but Aster is quick to assure her that he understands completely, doesn’t judge her for it and indeed is something of a connoisseur himself. From this point on, Ramius is much more open talking about her tastes in general, since she knows she has been truly accepted.

We see further evidence of how she changes as the story progresses. Her reputation as the “Loner Knight” still precedes her in many cases, but rather than getting indignant and upset at the way people treat her, she simply brushes these off and acknowledges that this is part of her life she has left behind her at this point. While this often attracts a few incredulous looks towards Aster, he who “tamed” the Loner Knight, most people don’t really have a good response to hearing that actually, Ramius is rather happy with the way her life has turned out at this point.

There’s a powerful scene later as the pair’s relationship develops; Ramius and Aster return to an earlier town and save it from a monster attack, and afterwards they overhear a number of comments from the townspeople. Most of these are along the lines of “look at her, the girl who once did some really embarrassing things, but now she’s capable and happy”. Ramius is initially distraught at how everyone was seemingly aware of her most shameful secrets, but Aster points out that this just means everyone has been watching her with love for as long as she has been around — and that they’re genuinely proud to see how far she’s come. 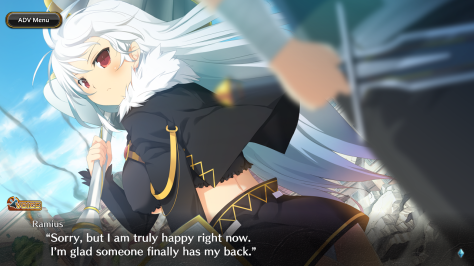 Although Ramius leaves aspects of her past behind her after developing her relationship with Aster, she still acknowledges those aspects that made her the person she is today. One of the most obvious is the outfit she wears; when Aster questions her about it, since it both seems to be a little ill-fitting and not offer very much protection, particularly to the underboob area, she notes that it is the same outfit her (rather more flat-chested) mother once wore, and that she drew great inspiration from her feats. Since her mother is no longer around, she wears the outfit as a means of connecting with this aspect of her past and reminding herself of what she aspires to.

Ramius is an interesting and complex character, in other words — and a great choice for Aster’s first wife in Evenicle. But, of course, it doesn’t stop there — we’ll have to explore that further another day, though!