Next month on MoeGamer is all about Gal*Gun 2, but in the meantime I couldn’t resist sneaking a peek in the shiny new limited edition box.

Publisher PQube and its partners at Rice Digital have put out some really nice (and affordable) limited editions over the last couple of years, so I was more than happy to stump up the extra cash for the “Free Hugs” edition of Gal*Gun 2.

Thankfully the new game doesn’t come in quite as obscenely large a box as its predecessor — that had a big wallscroll in it, so it was understandable — but still has a rather tasty set of goodies to enjoy. 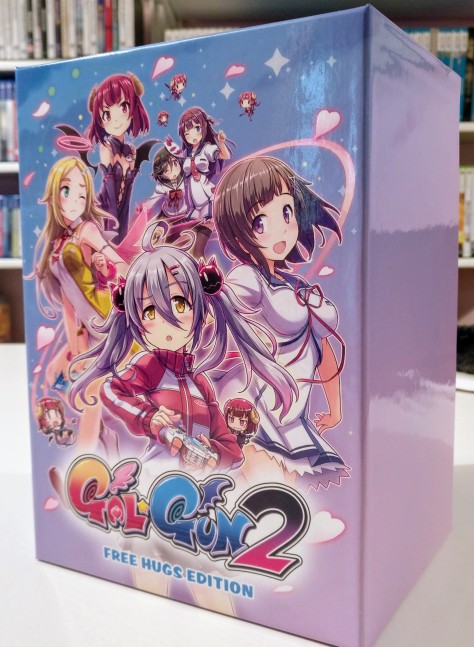 As you can see, the new bundle is in a much more manageable size of package, though it’s a lot deeper than some other LEs of similar size. The box is nice quality, though, being made of nice thick card with a pleasingly glossy coating to it. The main attraction is the art on the front, of course, but there’s colour all around on both the lid and the box — no cheaping out and leaving the bottom white here!

Pop it open and you’re immediately confronted with a Mr. Happiness plushie (which my wife has named “Jonathan”) of surprisingly substantial size and heft. Mr. Happiness is a good mascot to make into a plushie, since he’s a nice simple design, distinctive and immediately recognisable. Plus probably a bit cheaper to produce than a super-detailed anime girl! 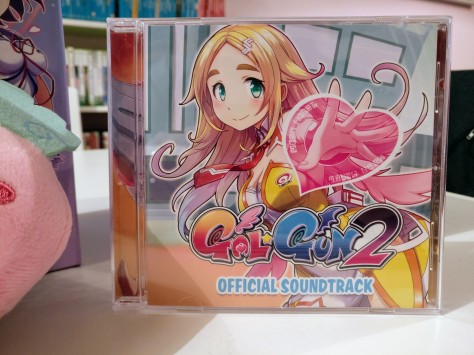 Next up is the soundtrack CD, always my favourite addition to any sort of limited edition package, even if all I do with it is rip it to my music library rather than actually play it. (My previous car had a CD player, so I’d actually take some CDs out with me, but my current one does not, so ripping is now a necessity if I want to listen to things on the go!)

There are 41 tracks on the CD, including several vocal numbers for opening and ending sequences. The in-game tracks are a little short for my liking, though the fact they’re not looped more is doubtless so they could fit more different tunes on the single disc. There are also a few short “jingles” on there too; I could have lived without those, but it’s nice to have a “complete” library of music from the game.

The disc art mirrors the front of the inlay, with new angel Risu taking centre stage.

Underneath the disc we have some cool artwork of one of the game’s heroines, Chiru. She’s evidently some sort of technical wizard — throughout the game she upgrades your Demon Sweeper weapon — and also apparently has some sort of aversion to shoes, since she’s barefoot in every image I’ve seen of her to date. I know a few people out there who will be happy about that, if you know what I mean.

When the limited edition was first announced, PQube was making a big deal about it having an “accessories pouch” , suggesting that said pouch would be somewhat lewd. I didn’t doubt them, since the previous Gal*Gun came with a pair of striped panties (claiming they were a “screen cleaner”) but the above image was all they had shown. And, sure, we’ve got the bare feet going on again, and the suggestiveness of lying on a bed, but…

Oh, right. Now I see. The other side was the lewd side. Risu’s halo has quite literally slipped. Also her clothes have popped open and you can see her undies. And she’s got an appealing bit of podge going on. Not quite full-on ｔｈｉｃｃ, but near enough. I approve.

Ahem. Anyway, here are some nice pin badges that come with the LE, including images of several of the main characters, the logo, and a chibi “mini-demon”-style Kurona.

Another main attraction is the art book, and this is designed to match the one from the first game, which is a nice touch. Kurona joins us on the front cover, sporting a slightly updated (slightly older?) look than her original incarnation. 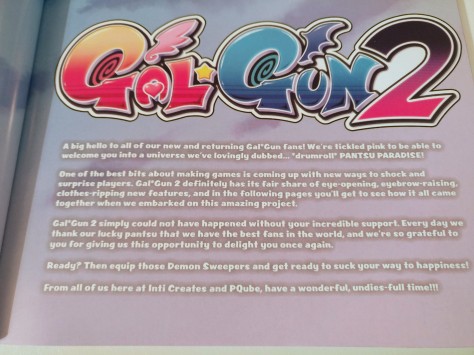 The book opens with a pleasingly heartfelt message from Inti Creates and PQube thanking everyone for their support. As I learned when I spoke with Matt Papa from Inti Creates a while back, Gal*Gun has always been a popular title behind the scenes at the developer — and the company was delighted that Western fans took to it so readily when asked if they would be interested in seeing it localised.

The art book features a number of different sections, including the event images from the game, concept art, character art and all manner of other goodies. It’s quite a substantial affair, printed on nice quality paper and wonderfully colourful throughout. 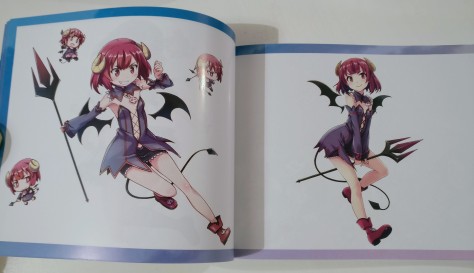 Here’s some more Kurona, since she was a great (if incompetent) antagonist in the first game, and I’m looking forward to locking horns with her again in the sequel. 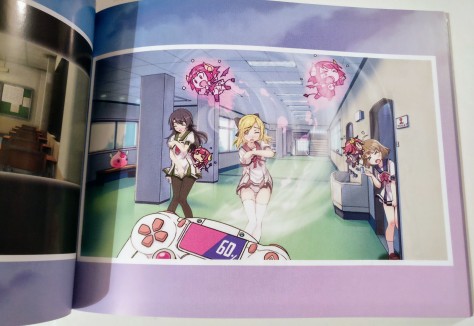 The concept art section has some cool mockups of the in-game visuals as well as sketches of characters, settings and items. Yep, this is definitely and recognisably Gal*Gun, all right.

I always like seeing rougher sketches of characters, as you sometimes see how they’ve evolved and developed over time. Risu here doesn’t seem to have changed too much from her initial designs — and that’s cool, because she’s an immediately appealing character. Perhaps not quite as distinctive as Ekoro, whose green hair tied up in an unusual twintailed style immediately made her stand out, but definitely a good look for a leading lady. 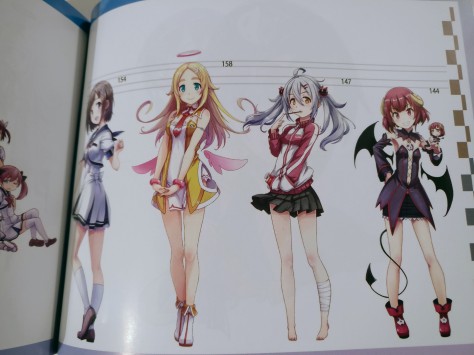 The character art section also has this fun chart showing the relative heights of each of the characters. Kurona is still a shortarse, which might explain why she spends so much time and energy trying to be a “larger than life” character.

And finally we have the game! It actually came outside of the main LE box — perhaps something to do with requirements set by Sony Europe, since Idea Factory International recently noted all their future LEs will ship with the game outside of the “goodies” box in future, too. Or it might just be so that they could use the same LE box for both the Switch and PS4 versions. It’s ultimately not a huge issue, since the game fits neatly inside the box if you want to keep it in there, or, if you’re like me, you probably want it on your shelf for easy access anyway. 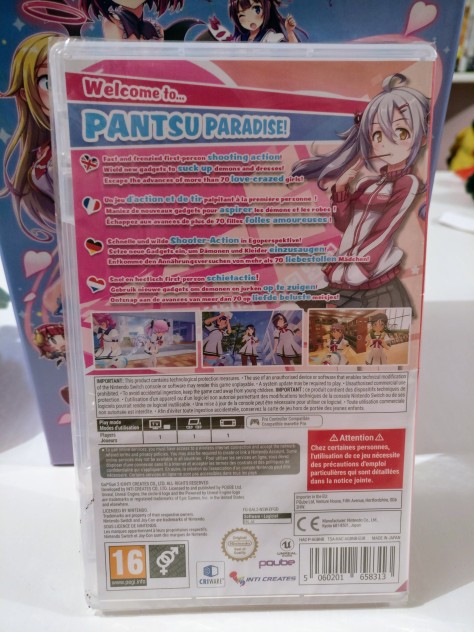 And here’s the back of the box. 16+ rating, content warning for “sex”. Not available for sale in Germany — although the box still carries German text, just to rub it in a bit.

All in all, a pretty nice limited edition for a game that I’m very much looking forward to getting started with! But that’s a story for next month.