I can’t in good conscience separate these two, so it’s a two-hander for this week’s Waifu Wednesday as we give thanks for the lovely IF and Compa.

Recurring characters in the Neptunia series since its very inception, IF and Compa are the personifications of developer-publisher Idea Factory and subsidiary developer Compile Heart respectively. They’re an inseparable pair — a reflection of the fact that you never see a Compile Heart game without Idea Factory branding, for obvious reasons — and, between them, popular choices for series waifus.

They’re also an interesting contrast to the main cast of goddesses, for numerous reasons. 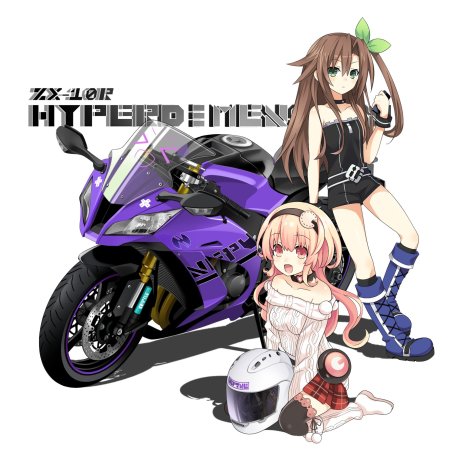 IF and Compa are part of a group of characters in the Neptunia series collectively referred to as “Makers”. These are human characters rather than the goddesses of the main cast, and personify game developers and publishers rather than hardware platforms. They also tend to be named rather more literally than their divine friends — while Vert, Blanc and Noire in particular are references to the colours most commonly associated with the platforms they personify, Makers tend to simply be outright named after their inspiration.

IF is the official abbreviation for Idea Factory, for example, while Compa’s name comes from the first part of “Compile Heart” pronounced using Japanese syllabary — コンパイルハート (Konpairu Haato). Elsewhere in the series we’ve encountered a number of other Makers including Nisa (originally named Nipponichi in the Japanese script), Cave, Falcom, Gust, Cyberconnect2 and a variety of others.

IF is a somewhat tomboyish young woman who is athletic but petite. She attempts to hide the latter fact through the fact she is typically seen wearing a rather elaborate coat that is clearly several sizes too big for her — an effort which, as you might expect, doesn’t really work, but which no-one really comments on. The elaborateness of her coat — it’s a very “JRPG” garment, with lots of adornments and buckles — may be a callback to the somewhat chuunibyou tendencies she is depicted as having had in the past, particularly in her Ultra Dimension (Hyperdimension Neptunia Victory) incarnation, but it may also simply be her attempting to overcompensate for her short stature.

IF is typically represented as being one of the most rational, level-headed and responsible members of the cast. This is perhaps intended as a reflection of Idea Factory’s role as overall publisher for the Neptunia series, and thus the body that has ultimate responsibility for where the series goes and what risks it takes. Less metaphorically, it also means that she’s often used as an effective “straight man” to the more energetic members of the cast — particularly the perpetually chaotic Neptune.

This isn’t to say IF doesn’t have a whimsical side, however. While responsible and mature for the most part, she’s depicted as having something of an obsession with her cellphones, with nine of her favourites clipped to her coat’s belt. She’s typically only seen using the pink one over the course of the games, but in Megadimension Neptunia V-II we discovered that separating IF from even one of her collection causes her to become rather more immature and emotional than her usually composed self. Her Superdimension incarnation in Hyperdimension Neptunia Re;Birth1 is also shown to have a very close relationship with Vert.

Compa, in contrast to IF’s somewhat tomboyish nature, plays up and emphasises her femininity, perhaps in reference to Compile Heart’s tendency to release games with a strong emphasis on attractive female characters. She’s depicted wearing a warm and snuggly-looking Aran-style sweater, short skirt and stockings; although her appearance and outfit gives her undeniable sex appeal, it’s clear that she’s mostly been designed to radiate a pleasant feeling of homeliness about her, helped along by the fact that, as a trainee nurse, she’s typically the “carer” of the group. As a character, she’s down to earth and, in many ways, rather unremarkable, but that’s what makes her so appealing.

Her Japanese script sees her ending most of her sentences with “desu” — a trope usually used in Japanese popular media to indicate characters that are particularly “cute” — and this is even lampooned in some of her attacks in the games where she is a playable character, with her shouting “desu, desu, desu!” as she unleashes her moves. She’s also depicted as rather clumsy; one of her recurring special moves sees her attempting to fire a laser beam from her trademark giant syringe weapon, only to trip over and fire it into the sky, creating a Compile Heart-themed light show that subsequently rains down damage on the enemies anyway. And one of the very first scenes in the entire series also sees her rather incompetently bandaging up a Neptune who has fallen from the sky and lost her memory.

Compa is rarely seen without IF, and the relationship between the pair is one that has, like the one between Nepgear and Uni, grown and evolved over time. In the original Hyperdimension Neptunia, IF and Compa did not know one another prior to the events of the game, but in the subsequent games’ other dimensions, they are typically represented as childhood friends who have grown up together and remained very close — possibly even intimate — ever since. Interestingly, we get to see the Ultra Dimension incarnations of the pair actually grow up from early childhood over the course of Hyperdimension Neptunia Victory/Re;Birth3, though the versions we most typically encounter in the series are the ones that hail from the Hyper Dimension. 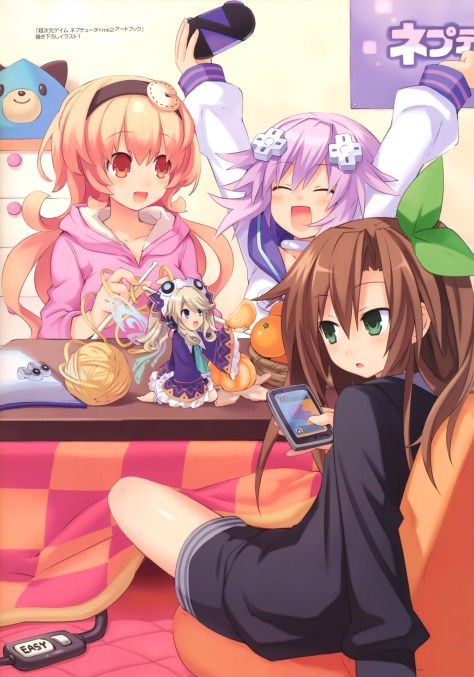 IF and Compa have always been depicted as close, but it’s not until Cyberdimension Neptunia that we get real, explicit confirmation that there are romantic feelings going in at least one direction between the pair of them. Specifically, there’s a scene in which the pair — who play shopkeepers rather than battle characters in the game — engage in a session of increasingly escalating compliments to one another, culminating with IF proudly and enthusiastically bellowing how much she loves Compa, and Compa to apparently respond in kind… only to follow it up with the blissfully innocent assertion that yes, she really means it… she loves everyone and wants them all to be happy. You can practically feel IF’s stomach knotting as you witness it. Heartbreaking.

As the personifications of the main developer-publisher combo of the Neptunia series, it’s likely that we’ll continue to see both IF and Compa in the vast majority of games going forward. Indeed, IF has even been the protagonist of a Neptunia game in the form of Superdimension Neptune vs. Sega Hard Girls — a game in which Compa did not appear at all, interestingly enough — and it’s clear that, by this point, they’re a fixture in the franchise.

Which is absolutely fine by me. Desu.

11 thoughts on “Waifu Wednesday: IF and Compa”