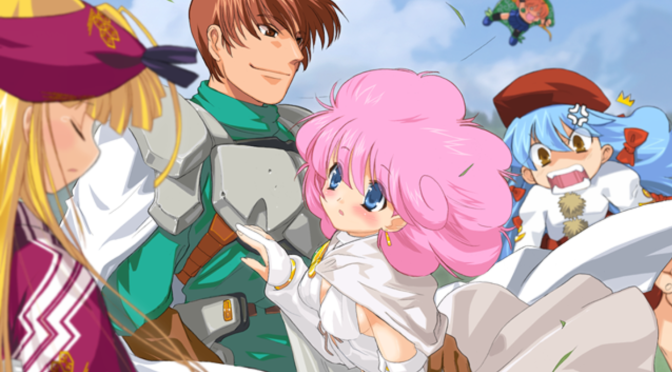 Typically, when we talk about gaming franchises that have been around since the early days of the medium, the same names tend to come up all the time.

There’s Final Fantasy, of course, which first appeared in 1987. Super Mario Bros., which hails from 1985. The Legend of Zelda from 1986. All classic series that are still going strong and have been highly prolific over the years, not just with their mainline installments but with numerous spinoffs, too.

What we’re going to explore this month is a series of games from Japan that has been going as long as these established classics, but which remains relatively unknown in the West so far due to 1) its status as an eroge and 2) the fact it only got its first localised release in December of 2016 thanks to MangaGamer.

I am, of course, talking about Rance. Tooooohhhh!

The progenitor of the Rance series was a 1987 adventure game for PC-98 systems called Little Princess. While initially appearing not to have much to do with the games that came afterwards, the narrative depicted in this short game — it can be beaten in less than ten minutes if you know what you are doing — was later retconned into some important background lore for the Rance series.

Little Princess was developed by an outfit called Championsoft, who would later become Alicesoft, the developer of the entire Rance series. In fact, more impressively than that, the Rance series has involved a lot of the same individual staffers on its various projects right from Little Princess onwards — most notably Kazufumi Tada (aka simply “TADA”), who wrote the scenario for Little Princess and has directed a significant proportion of the whole series to date.

TADA co-wrote Rance I: Quest for Hikari in 1989. This was seen as a particularly important development in the then-fledgling eroge industry, since among other things it demonstrated that it was possible to produce a game with adult content that featured a meaningful story and gameplay rather than just as a flimsy excuse for some pornographic images. Around the same time, ASCII released Chaos Angels and ELF released Dragon Knight; between the three of them, it was clear that there were a number of Japanese creators keen to prove explicit, erotic content could be intertwined with a compelling narrative — much as it had been in anime for some time by this point — as well as gameplay with a little more depth than simply reading and making occasional choices.

Quest for Hikari was essentially a role-playing game wrapped in an adventure game-style engine. This is actually still quite a common and popular approach even today, as many modern low to mid budget Japanese RPGs forego traditional genre aspects like field screens and fully explorable towns in favour of menu-driven navigation and visual novel-style dialogue scenes. This is not to say this is a bad approach, either; if anything, titles like Dungeon Travelers 2 and the Neptunia series have ably demonstrated that this relatively minimalist approach can be extremely effective in placing a strong emphasis on the characterisation of the main cast and exploring just small parts of the world in great detail, which is exactly the approach much of the Rance series takes.

The character of Rance was intended to be a response to the typical Japanese “heroic” figure seen in popular media. While the archetypal Japanese fantasy protagonist was (and in many cases still is) young, bright-eyed, probably a little bit awkward (especially around women) but burning with a strong sense of justice, Rance is a little older — the games chart his life from the age of 18 until his late 20s — plus a lot more cynical, selfish, self-confident and horny. He’s a total inversion of the norms, in other words. If one were to describe him in terms of the traditional Dungeons & Dragons alignment grid, he’s Chaotic Neutral at best; he is generally out for his own gratification, though he will step in and do “the right thing” if it aligns with his interests.

This, of course, makes him an immediately striking character, and is one of the reasons the Rance series as a whole has been so popular over the years, both in its native Japan and, prior to MangaGamer’s official localisation of 5D and VI, among fan-translation groups and their followers online. He’s so unlike any other protagonist out there it’s refreshing; while he is most certainly not a “nice” character — he’s foul-mouthed, ill-tempered, abusive to the people close to him and a little too eager to stick his dick in anyone he finds the slightest bit attractive whether they want it or not — he is both fascinating and darkly amusing to spend time in the company of.

As we’ll explore further when we look more deeply into the overall lore of the Rance universe, Rance distinguishes itself from the Final Fantasies of the world by having a coherent ongoing narrative as the series progresses rather than each new game being self-contained. In this way, the complete series allows us to gradually come to understand Rance’s world a little piece at a time — somewhat similarly to how Falcom has handled its Ys and Kiseki series over the years.

Each of the main installments in the series introduces a number of important characters, and these characters often return in subsequent installments for many years to come. Thankfully for those of us whose first encounter with the series in the West was MangaGamer’s localisation of 5D and VI, there’s no requirement to know or understand the myriad intertwining backstories of the various recurring characters you come into contact with. 5D was intended as something of a “soft reboot” for the series, hence it being the first to get officially released over here, but it’s worth noting that you certainly get a much stronger feeling of the series’ overall consistency if you take the time to do a bit of research.

It’s very clear that TADA and his team is serious about ensuring the Rance universe, while at times utterly ridiculous, makes sense within its own definitions and isn’t just silly for the sake of it. To that end, Alicesoft actually ended up remaking the first three Rance games in order to ensure they better fit into the overall canonical timeline of the series — and to allow players on more modern computers to enjoy them — but we’re yet to see an official Western release of these. One day, perhaps.

As for the games themselves, we’ve certainly seen a wide variety of different gameplay types over the years. While the first two installments maintained the “adventure/RPG” hybrid style, as the series progressed we started to see more and more creativity and ambition in terms of mechanics, beginning with a shift to top-down dungeon-crawling in the third and fourth games, heavily stylised adventuring in the two spin-offs to Rance IV and large-scale strategic conquest gameplay in the wildly popular (albeit non-canonical) Kichikuou Rance.

We’ll explore Rance 5D and Rance VI in greater detail in their own dedicated articles later this month — as well as taking a look at Sengoku Rance and Rance Quest Magnum when they release later this year — but suffice to say this is not a series content to rest on its laurels and do the same thing for game after game. Quite the opposite, in fact; even more so than series such as Final Fantasy that are renowned for constantly reinventing themselves, Rance is a series that has grown, evolved and changed greatly over the years alongside improvements in technology, interactive storytelling techniques and game design.

Its niche status (in the West, anyway) as an 18+ eroge series unfortunately appears to preclude it from inclusion in the established “canon” of games that are regarded as influential or otherwise significant by many critics… but for my money, if a series can survive from 1989 up until the present day and still remain popular — even beloved — by its fans, it must be doing something right. And as such, it’s worth paying attention to.

So that’s exactly what we’re going to do, beginning next time with a detailed look at the extremely well-crafted lore that forms the backdrop to the series.

12 thoughts on “Rance: Introduction and History”