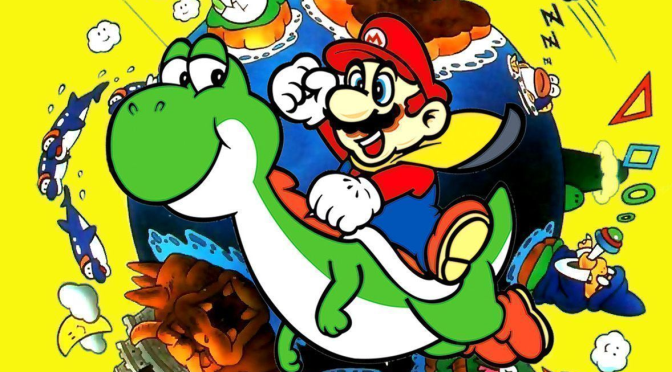 One of the biggest sources of playground arguments in my youth was whether Super Mario World or Sonic the Hedgehog was “better”.

I owned a SNES, so I should have been firmly in the Team Mario camp, but at the same time my brother was working on games magazines and regularly brought consoles home with him for us to try out — including a Mega Drive with Sonic the Hedgehog. And as such I learned to appreciate both on their own merits.

While less outright “impressive” in terms of spectacle than Sega’s classic — a fact that Team Sonic liked to rely on in aforementioned arguments — Super Mario World was certainly a game that kept me coming back for more. And for my money it remains one of the best Mario games — perhaps one of the best platformers — of all time.

Super Mario World is the fourth Super Mario Bros. game, and builds on the ideas established in the NES’ Super Mario Bros. 3, expanding on some and discarding others. The result is an adventure that is impressively sprawling in its entirety, but perfectly playable in bite-sized chunks, too; it’s a design philosophy that Nintendo has maintained over the years, even in many of its modern titles.

Super Mario World is split into two main components: a node-based map screen, in which you explore the various regions that make up the complete game world, and the levels themselves. Reaching the end of a level unlocks the path to the next, though some levels have two different exits, with each unlocking a different pathway. Sometimes these alternate routes are shortcuts, sometimes they provide completely different directions to go in, and sometimes they’re dependent on things you’ve done much later in the game.

The nice thing about Super Mario World is that if you’re the sort of player who is disinclined to go exploring and hunting for secrets, you can play it like one of the older Mario games and simply try to get to the end of each level in one piece. Doing so will get you to the end of the game one level at a time, and you’ll have had a satisfying experience in the process.

Wander off the beaten path, however, and you’ll find all manner of interesting things to do. Secret levels that you won’t come across if you simply follow the game’s critical path — hell, two entire “worlds” that can only be reached via these alternative routes, featuring some of the game’s most challenging levels. There’s even a quick route to the “back door” of Bowser’s castle at the end of the game, allowing skilled speedrunners to beat the game in well under an hour, and the amusing gimmick of changing the appearance of all the game’s enemies if you beat all of the “Special” secret levels.

When it comes to the levels themselves, Super Mario World truly shines. Each level is markedly distinct from the last, providing varied experiences and challenges that keep you on your toes throughout the entire game. Some levels are exploration-based, others are dependent on precise platforming skills. Ghost houses tend to revolve around solving puzzles, deduction or careful trial and error. Auto-scrolling levels put pressure on you as you have to learn to recognise the “rhythm” of the stage and follow along with it. And, of course, the castles in which you face the game’s bosses see the game combining all its most devious mechanics together.

The game even develops a nice audio-visual language to give you an idea of what to expect from each new level you encounter. Hear the cheerful steel drum version of the game’s main theme, for example, and you know that you’re likely in for a reasonably sedate level in which the emphasis will be on finding your way through it. Hear the version played at a high tempo on a honky-tonk piano, however, and you know you’d better keep a firm grip on that controller, as there’s some fiendish platforming coming your way. 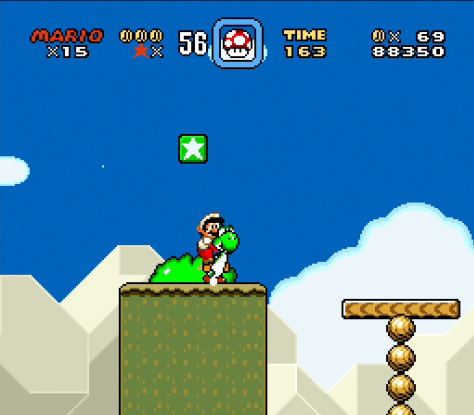 The game features lots of nice subtle flourishes like this. Hop on Yoshi’s back, for example, and the music adds bongos to the mix; jump off (or get knocked off) and it returns to the more subtle percussion of the original mix. Sounds echo in underground caves. The sparse mix of the ghost house music makes the sound effects sound much more crisp and out of place, like you’re disturbing the silence. And the dramatic castle music is often emphasised by the sounds of heavy traps slamming down, making it clear that Mario is in a very dangerous situation.

Control over Mario in Super Mario World is probably the best in all of the 2D Mario games. You always feel like you’re in complete control of the portly plumber, and there are no complex button combinations to remember, keeping things accessible even for newcomers. At the same time, however, certain powerups such as the cape demand practice to use effectively, allowing experts to demonstrate their skill by accessing hard-to-reach secret areas; crucially, however, at no point is mastery over the game’s more complex features necessary; they simply allow you more ways to explore and enjoy the vast world that has been laid on for you.

Perhaps Super Mario World’s most impressive feat is that over the course of its 96 possible level exits (not 96 levels as some people incorrectly state!) it never once feels stale. The game shakes things up with sufficient regularity to keep things interesting, with each of the worlds having a loose visual or stylistic theme that provides context without being gimmicky. And while it doesn’t quite achieve that which more modern Mario games do, which is to show one cool new thing in pretty much every level, then move on without overusing it, it definitely provides an enjoyably varied experience from start to finish, and remains a veritable masterclass in how to design a solid, challenging and hugely enjoyable 2D platform game.

In fact, really the only criticism I can level at Super Mario World is that it has score and lives systems that were already completely redundant on its original release, and which seem even more out of place from a modern perspective. Hardly a game-breaker, though, and not at all unusual for games of this era, either.

So is it better than Sonic the Hedgehog? You know, I feel the same about it now as I did back then — while the two games are superficially similar, you can’t really compare them directly, because they take markedly different approaches to the platform game genre. Both are great, influential, genre-defining, even.

If I absolutely had to pick one, though? I think I’d probably have to side with Team Mario once and for all. Sorry, Sonic fans!