Although it was quite a few years ago, I have some vivid and fond memories of my first experiences with what I now know to be visual novels.

I commonly attribute my present love of visual novels to 2012’s Katawa Shoujo, but in fact my earliest encounter with the medium was some years earlier. This was back when I first discovered an interest in Japanese popular media in general thanks to a combination of promotional Manga Video VHS cassettes my brother brought home on one occasion, and the discovery that I really liked JRPGs thanks to Final Fantasy VII.

Those early visual novels had a pretty strong impact on me, and I was delighted to discover that there are ways to play them once again on modern machines — more on that later. 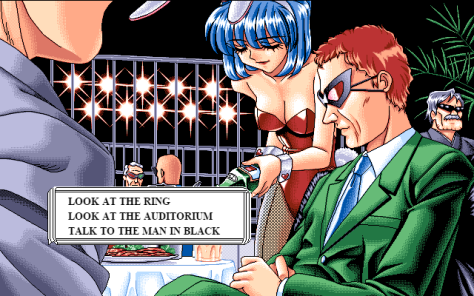 I forget the exact context through which I came across these games for the first time, but it was probably a combination of factors.

We’re talking the mid to late ’90s here, when I still lived at home with my parents. I was aware that “dating sims” existed and were a popular genre of game in Japan, but also that they tended not to get localised, at least on console. I was disappointed about this, as I had long been fascinated by the idea of video games that reflected something other than the usual shooting aliens, racing cars and suchlike.

I often doodled designs of such games, though with my rudimentary programming knowledge (Atari BASIC and a bit of STOS on the Atari ST — kudos if you remember that) I was never quite able to put anything together myself, and, it seems, I was forever to be denied the opportunity to play “a game about relationships” in English.

Anyway, I noticed that these pictures tended to be collected together into “sets” of sorts, and that those sets were far from just random collections of images: each set incorporated a distinct cast of characters and often seemed to tell a story of some description. Not just a story about fucking, either; many of these image sets included pictures of the characters in fairly mundane scenarios as well as getting naked and nasty in various ways.

I looked into the matter further and discovered that a lot of these sets were described as “game CG”. I couldn’t quite imagine what kind of game this sort of image came from, so I continued to investigate until I somehow found myself in a dark corner of the Internet downloading a game called Ring-Out!! Pro-Lesring on the grounds that wrestling lesbians sounded like something I very much wanted to be involved with.

Parents out of the house, I fired up Ring-Out!! with some trepidation, not sure what to expect. A few hours later I had been through a whirlwind of emotions ranging from arousal to disgust via fear and sympathy. What on earth was this thing I had just downloaded and experienced? It certainly wasn’t what I had come to expect from pornography.

Ring-Out!!, for those unfamiliar, tells the tale of a young girl named Aya, who is taken away from her debt-ridden parents by shady underworld types until they are able to pay off their debts. She’s not just locked up, though; she’s forced to compete for the entertainment of a sleazy crowd in the aforementioned lesbian wrestling matches; an event in which the participants attempt to force one another to submit, either through beating the crap out of each other or, alternatively, bringing their opponent to orgasm.

Aya is thrown right into the action against an experienced participant known as Wildcat, who mercilessly defeats her in her first match, but, feeling somewhat bad at having made an innocent young girl cry in such a public setting, ends up taking her under her wing. From there, the narrative can branch off in a number of different directions according to the choices you make as Aya along the way, leading to a variety of different conclusions. 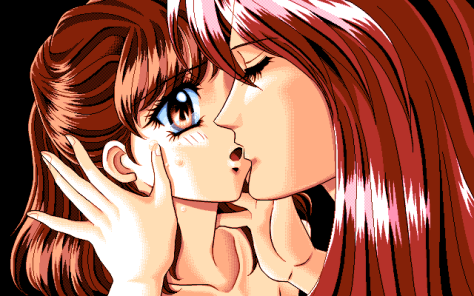 Ring-Out!! isn’t a work of great literature by any means, and it’s fair to say that its narrative was primarily intended to provide an excuse to show pretty girls wrestling and fucking each other. These days we tend to call games like that nukige, but even though it was clear the game had a strong “porn” element to it, I was immediately struck by how much effort had been put into the narrative and characterisation. Not only that, I was seriously taken aback by how little the game held back; some of the routes ventured into pretty dark territory, and some of the sexual scenes featured content that I found pretty gross. But I was still fascinated by the whole experience.

So I sought out more. After my initial encounter with Ring-Out!! I found myself trying a few other games, most notably Paradise Heights, in which you play a caretaker of an apartment block and get involved in all manner of shenanigans with the residents, and Three Sisters’ Story.

The latter of these surprised me a great deal. It very much de-emphasised the pornographic aspect in favour of telling a compelling mystery story. Not only that, the game actively punished you for lustily seeking out as much sex as possible; bang your way through the titular three sisters and you’d end up with a bad ending, though you’d have seen some hot scenes along the way. Remain loyal to one, however, and things would unfold rather differently.

I knew I was onto something special here, but it was a good few years before I played my next visual novel. But boy, what a great game it was.

I forget which of my group of friends and I at university stumbled across Parsley’s True Love for the first time, but I do know that once one person had surreptitiously downloaded it to a Zip disk on the music department’s high-speed Internet connection, we all had a copy in short order.

And how replayable it was! Given the way the game’s stat-building gameplay worked, it was impossible to pursue all the girls in a single playthrough, and in order to get a good ending you had to successfully choose a single “true love” from the entire cast at the narrative’s conclusion — and yes, you could get turned down. It was hugely enjoyable to uncover what the different girls liked and responded well to, and there were plenty of secrets to uncover, too; this was not, by any means, a straightforward, linear experience.

These games fascinated and compelled me for a variety of reasons, not least of which was the fact they were games about people. What I’ve learned in the last year to be Asperger’s had, for many years, manifested itself as social awkwardness and a struggle to make friends or pursue romantic and sexual relationships, so what these games provided me was the ability to enjoy these things somewhat vicariously.

I could tell that the characters were caricatures and tropes, much as they are in many modern popular works, but they were believable enough to get my attention and keep it. These were experiences quite unlike anything else I had experienced in gaming, with the closest Western experiences I had had to date coming from narrative-centric adventure games and interactive fiction.

There’s something special about that era of visual novels. The 16-colour high resolution pixel art. The catchy MIDI tunes. The dodgy localisations. The often uncompromising nature of the stories, putting their characters into dangerous, unpleasant or horrifying situations with no real guarantee that “everything would be okay”. And, yes, the surprising sight of sex on your computer monitor as part of a game.

With the explosive growth of visual novels in the last decade or so thanks to the efforts of localisers and publishers like JAST USA, MangaGamer, Sekai Project and Denpasoft, all the things I’ve described might seem quite mundane now. But at the time, these games truly offered something utterly remarkable — and they maintain a fascination for me today.

And, as I teased earlier, you can still play these games today, too! While the original releases were often designed for pre-XP versions of Windows and consequently struggle to run properly on modern machines, the sterling efforts of The Asenheim Project allow you to play the games I’ve mentioned — and more — right in your browser.

Okay, it’s not quite the same as owning a copy, but for those of us who find it impractical to sort out a 486 Windows 95 setup just to get our 16-colour rocks off to, The Asenheim Project is a great place to discover the early days of a great medium.

Time to check in on Wildcat, I think…