Roguelikes have been around for many years now, but in recent years we’ve seen an explosion in popularity of more accessible games that present a friendlier face to this notoriously obtuse genre.

Well-received Western indie titles such as Spelunky, Rogue Legacy, Dungeons of Dredmor, FTL and numerous others helped popularise (and, some may argue, dilute) the roguelike genre. At the same time, games such as One Way Heroics and the Mystery Dungeon series helped develop the genre in a distinctively Japanese direction.

But this development isn’t quite as recent as you might think. In fact, we’ve had accessible console-style roguelikes since the 16-bit era, though many may not have been aware of “roguelike” as a genre at the time. And a great — if particularly punishing — example can be found in the form of Sega’s Fatal Labyrinth (aka Shi no Meikyuu: Labyrinth of Death, no relation to Compile Heart’s MeiQ: Labyrinth of Death) for Mega Drive.

Fatal Labyrinth begins looking somewhat like a traditional console-style RPG. You wander around a town talking to people, most of whom seem to believe that you are the only person who can possibly defeat the dragon who has taken up residence in the local Foreboding Tower of Doom, despite you being rather ill-equipped for the task at hand.

Once you’re into the tower proper, however, it’s easy to see from a modern perspective that we’re well and truly in traditional roguelike territory, despite the use of graphics rather than ASCII characters to represent what’s going on. Everything is turn-based, with enemies moving as you move, and there’s a strong emphasis on careful positioning to ensure you don’t find yourself overwhelmed by enemies surrounding you.

Fatal Labyrinth starts throwing you interesting situations to deal with almost from the very outset, with enemies that can put you to sleep or attack from range putting in an appearance early in your adventure. And the game expects you to have the courage and confidence to experiment in order to deal with these situations, because it sure as hell isn’t going to tell you what that “orange potion” you just picked up does until you quaff it and deal with the consequences. 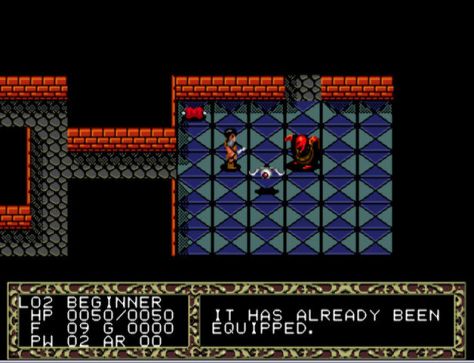 Unidentified (and randomised) items is an aspect of the genre that many modern, more lightweight roguelike-inspired games tend to forego because it’s a mechanic that is not, at heart, terribly friendly or fair to the player. When anything you pick up has the possibility of at worst immediately killing you, there’s always a moment of genuine trepidation before you hit the “use” button on the item in question.

Dealing with the potentially negative consequences of the items you pick up is part of the fun of Fatal Labyrinth. Because once you deal with those immediate negative consequences — assuming you didn’t simply die in the process — you can then make use of future occurrences of these items to your advantage. That bottle of poison you accidentally guzzled down which caused you to spend the next 30 turns attempting to keep your internal organs on the inside could become a useful thrown weapon if you were to find another one. 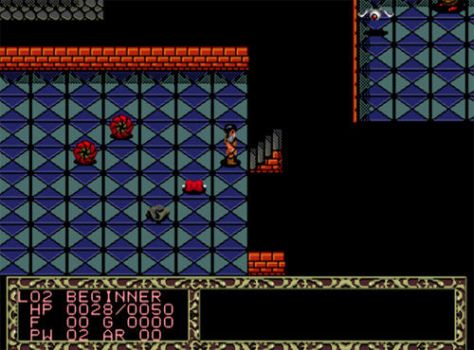 Fatal Labyrinth doesn’t really have a story beyond your initial reason for entering the dungeon in the first place. This is probably for the best, because it produces its own rather enjoyable emergent narratives each and every time you play, and emergent narratives can clash somewhat with carefully composed, pre-scripted stories. It also helps prevent repeat playthroughs from becoming tiresome, since you’ll never find yourself having to watch the same cutscenes and story sequences again, because there aren’t any.

And you’ll be starting over in Fatal Labyrinth a whole lot. Because not only is this a traditional roguelike in the sense that there is permadeath — albeit with the caveat that every five floors you successfully traverse allows you to start a new run in the same session from that point — but there’s also no save system whatsoever, meaning that you can’t simply stop playing and pick up where you left off later, nor is there any sort of persistent progression that gradually makes the game easier over time as you unlock more content.

No, Fatal Labyrinth is a pure and simple roguelike that most certainly does not want to let you get through to the end, and this means, from a modern perspective, that it won’t be to everyone’s taste.

However, its attitude towards progression — and its demand that it be beaten in a single session, because emulator save states are for pussies — is firmly in keeping with how Mega Drive games, particularly in the early days of the system, were designed. Sega’s own games, as well as many of the platform’s other most well-regarded titles, were put together in a similar fashion to arcade games: they were designed to test a player’s skill rather than patience or persistence, and Fatal Labyrinth, despite not being a particularly arcade-style game in the first place, is no exception.

It might be unthinkable to contemplate a role-playing game with no save system from a modern perspective, but that’s what we have with Fatal Labyrinth — and this structure is also what makes it a surprisingly rewarding game to play. Make it through to the end of the game and you know that you’ve achieved something significant; you might have made use of the “continue every five floors” feature, sure, but you’ve still beaten the game in a single sitting.

And that, in turn, allows you to set interesting new goals for yourself: perhaps the next time you play, you can try and clear it without continuing. Or within a certain self-imposed time limit. Or without using certain types of item, or at as low a level as possible, or with killing as many enemies as you can.

Fatal Labyrinth’s simplicity allows for it to be enjoyed in a variety of different ways as well as making it friendly to both long and short play sessions. It may not seem as feature-packed, convenient or friendly as modern takes on the roguelike, but in many ways that purity of experience is rather enjoyable; Fatal Labyrinth knows exactly what it is, and isn’t trying to be anything more than that. If you want to make anything more of it, it’s not going to stop you, mind, and indeed that is where veteran players can continue to find enjoyment from it even after beating it.

It’s not the flashiest game on the Mega Drive, nor, arguably, is it even one of the most memorable. But it’s a solid addition to any collector’s library — and a game that will keep its most dedicated players busy for quite some time as they attempt to conquer the labyrinth’s many challenges.