There was a period in my life where I happily devoured every single JRPG I came across to the exclusion of almost all other types of game.

To be perfectly frank, I’m pretty much back in that situation now after a few years of feeling “obliged” to play the big triple-A games that everyone was talking about, but I still primarily associate my early 20s with “my JRPG period” — or perhaps more accurately, “my first JRPG period.”

Returning to the fold a number of years after my original JRPG binge has allowed me to both appreciate how the genre has changed and evolved over the years, and see the older titles I loved so much first time around in a new light. So with that in mind, let’s look back at a classic long overdue an HD remaster.

One of the games that left something of a lasting impression on me during The First JRPG Age was Skies of Arcadia on the Dreamcast (and later the Gamecube).

This game, developed by Overworks and published by Sega back in 2000, was immediately striking to me for a number of reasons. Firstly, it was a high-quality JRPG on the Dreamcast, a platform which hadn’t enjoyed anywhere near as many good role-playing experiences as the PS1; and secondly it was set in a rather unconventional, interesting world populated with appealing characters.

In retrospect, a third reason I still think on this game fondly is the fact that I still have very vivid memories of my housemate’s boyfriend staggering in at about 11pm one night, stoned off his tits, and just staring at the screen (where I was playing the Dreamcast version at the time, the next morning’s university lectures be damned) for several minutes before mumbling something about how he could “imagine the ancient civilivilizations [sic] who carved that shit on the walls.” Don’t do drugs, kids.

Skies of Arcadia tells the story of Vyse, a young man who is a member of an organization known as the Blue Rogues alongside his friend Aika. The Blue Rogues are a band of “air pirates” who use their flying airships (in this case, literally pretty much just the sort of ships you’d see in the ocean, only flying) to harass the Armada of the tyrannical Valuan Empire.

As the game progresses, Vyse and Aika come across a mysterious, quiet young woman named Fina, who is a member of the enigmatic Silver Civilization. As tends to be the case with members of enigmatic civilizations, everyone wants a piece of the rather meek Fina, so Vyse and Aika take on the role of her protectors and set out on a grand adventure to help her recover the Gigas-summoning Moon Crystals before the Valuan Empire can use them for assorted unpleasantness.

The story of Skies of Arcadia, though enjoyable fluff with a memorable cast, wasn’t the real star. Rather, the main reason to play it was the wonderful Jules Verne-esque world and the curious characters who inhabited it, who offered a strange blend between the usual colorful JRPG exuberance and the more Western sensibilities of steampunk.

Vyse’s grand adventure took place in a world of floating islands in the sky, with the only way between them being to travel aboard the aforementioned airships. And far from being just a simple means of getting from point A to point B, the use of airships was integrated tightly into the gameplay so as to give the player a wonderful feeling of exploring the uncharted world of the skies.

Besides simply moving between story beats, the player was encouraged to explore the skies and come across “Discoveries,” the details of which could then be sold at Sailors’ Guilds around the world, with the exact reward being dependent on how much (or little) time had elapsed between the Discovery becoming available and Vyse and co. actually finding it.

No game involving ships (airborne or otherwise) would be complete without some sort of “naval” (for want of a better word) combat, though, would it? And Skies of Arcadia certainly didn’t disappoint on that front. 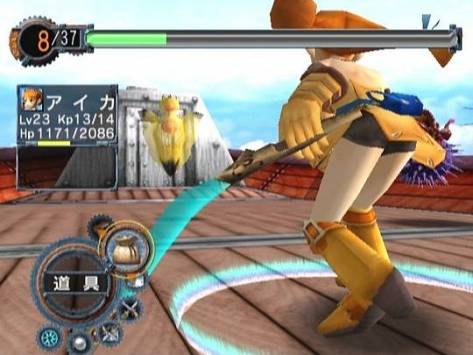 While many of the random encounters Vyse and the gang ran into while exploring the world simply required them to run out on deck and beat down whatever monster was harassing their vessel, occasionally they’d run into fellow airship-owning sky scoundrels and have to indulge in some ship-to-ship combat.

Far from being a simple reskin of the usual battle system, the ship-to-ship combat made use of a strange but very effective strategic system in which you had to plan out your moves in advance on a grid which showed how and when the enemy was going to act. Each of your ship’s cannons could only be fired once per turn, so you had to ensure that you took advantage of openings when they arose while ensuring you defended yourself from incoming fire.

It was also possible to call upon various crew members to make use of their special abilities during ship-to-ship combat, giving a great feeling of everyone working together to take down the powerful opponent. The wonderful cinematic presentation of the airship battles really helped convey the drama of these situations — and the mechanic wasn’t overused throughout the game so it never became overly tiresome.

The same can’t quite be said for the regular character-on-monster combat, however. The encounter rate was so high in the Dreamcast original that it was noticeably reduced in the 2003 Gamecube rerelease Skies of Arcadia Legends – don’t worry, though, level-grinders; the experience gain was increased to make up for the reduced encounter rate.

This isn’t to say that the game’s combat system was bad – while relatively conventional in execution, it was fun, strategic and challenging, and generally required a little more brainpower than just mashing the “Attack” button for every character — it’s just that, well, some people thought there probably didn’t need to be quite so much of it. Sega and Overworks apparently agreed.

The reduced encounter rate wasn’t the only improvement in the Gamecube version. While the textures weren’t improved to a noticeable degree, character models enjoyed an increased polygon count, and the framerate was better. A bunch of new Discoveries were added, a “Wanted List” was added to encourage exploration and battling against challenging enemies, and new sidequests were added.

To compensate for the fact the Gamecube lacked the Dreamcast’s VMU memory card-cum-mini-handheld and was consequently unable to make little beepy noises any time a hidden object was nearby, the interface was adjusted so that feedback was available on screen. The standalone Pinta Quest VMU minigame of the Dreamcast original was, sadly, nowhere to be seen in the Gamecube version, however — understandable, really.

To cut a long story short — seriously, I could happily ramble on for another few thousand words about how great this game was — this is a game that needs to come back for the HD generation. Sadly, there’s been no sign of it yet, even despite occasional reports of Sega renewing various trademarks — the most we’ve seen of Vyse in recent years is as a playable character in kart racer Sonic and All-Stars Racing Transformed, accompanied by an admittedly excellent Skies of Arcadia-themed level.

All that said, we have seen the digital rerelease of a number of Dreamcast games over the last few years — and Shenmue III is a thing that is actually happening, too — so never say never. Just maybe say “one day, soonish, possibly, if we’re lucky” instead. 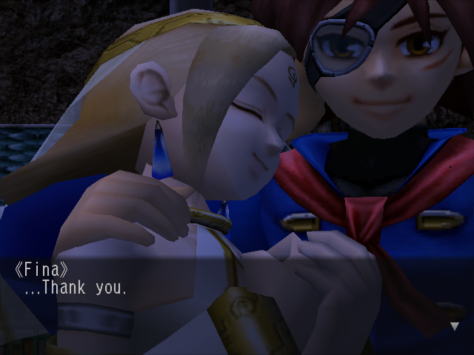 In the meantime, if you want to play Skies of Arcadia, you’ll either need a Dreamcast or a Gamecube. The Gamecube version is arguably the slightly superior experience due to its less frustrating random encounter rate and additional content, though it’s worth noting that the music was more heavily-compressed and is thus slightly lower quality on the Gamecube version than the Dreamcast original. The reason for this is that it was squeezed onto a single Gamecube disc instead of the two GD-ROMs of the Dreamcast version.

Regardless of what platform you play it on, though, Skies of Arcadia is a wild ride that is well worth investing some time in. Here’s hoping we hear some good news on the matter at some point in the future, though, as this is a game eminently worth revisiting.