Today I’d like to talk specifically about one of the narrative paths of Overdrive’s visual novel Kira Kira.

Specifically, I’d like to discuss Chie-nee’s path. There are spoilers ahead, so be warned if you’re planning on playing this. (And you should — it’s really rather good.) 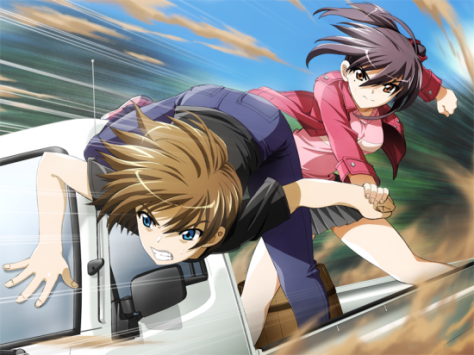 Kira Kira, lest you’re unaware and/or haven’t read my previous mentions of the subject in this very column, is a visual novel about the (mis)adventures of a Japanese Christian school’s “second literature club” and its members’ attempts to do something special for their last year before they graduate. The story unfolds in three distinct parts, each of which is a self-contained story in its own right, and features several different endings — three “good” ones for the three main heroines, a “true” one only accessible after seeing the three “good” endings, and four “bad” endings.

Kira Kira’s protagonist is Shikanosuke “Shika” Maejima, a rather wordy teen who likes talking about himself. Indeed, much of the narration of the game is delivered as if Shika is directly addressing the player, and his storytelling has a habit of jumping around in time a bit.

As we join him, he’s just getting over a couple of mild emotional traumas — firstly, stress-related medical problems which brought his promising career as a young tennis star to a screeching halt, and secondly, his breakup with his girlfriend.

At the outset, Shika is drifting along somewhat, not really sure what to do with himself, and it’s there that he first encounters the second literature club and its members. Among them is Chie Isurugi, his childhood friend (there’s always at least one childhood friend in this sort of thing), a young woman whom he had somewhat lost touch with in recent years.

Chie is easily the most “mature” of all the characters in Kira Kira. This can at least partly be attributed to the fact that she’s a year older than the rest of them — she had to repeat a year due to her parents’ separation screwing up her grades the previous year — but from Shika’s descriptions, we can also tell that she’s always had a somewhat grown-up attitude towards life.

This accounts for why Shika habitually refers to her as “Chie-nee” as if she is his big sister, rather than using more respectful (“-san”) or diminutive (“-chan”) honorifics towards her.

In fact, later in the game we learn that Shika did once refer to her as “Chie-chan” when they were both younger, but his feelings towards her changed over time as he saw how she was growing up while he was just sort of drifting along down whatever life’s easiest path was.

Even after the two enter into a relationship — which doesn’t occur until near the very end of the game — he still refers to her as “Chie-nee.” 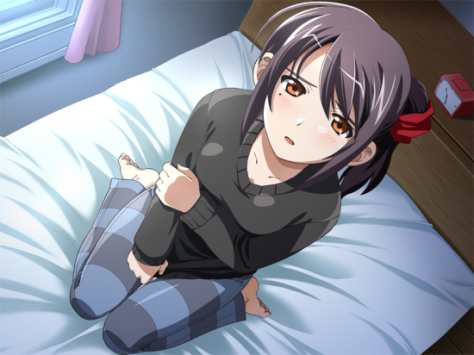 Kira Kira’s three-part overarching story tells a rather heartwarming “coming of age” tale as a whole, but each of these parts works as a self-contained story in its own right.

The first part tells the story of the second literature club coming together and forming a band to give themselves a good sendoff at the school festival; the second tells the tale of their tour around Japan after they all decide that no, they don’t really want to give up the feeling of liberation and freedom that music gave them; and the third — in Chie’s case, at least — concentrates on the relationship between Shika and Chie, as well as Chie’s complicated family life and her own internal struggles.

Although Chie is the most mature of the group, she’s certainly not immune to very human problems. Other members of the group — including Shika — tend to rely heavily on her for support in times of difficulty, since she usually acts as the voice of rationality. But as we get to know her, it transpires that she’s not having a particularly easy time of it at all.

Her father cheated on her mother and left the family to fend for themselves, and throughout the course of the whole game, we see that the divorce proceedings between the two of them are not going at all smoothly. This has a strong impact on Chie’s emotional wellbeing, though she’d never admit it at first.

It’s clear that she goes along with the increasingly outlandish plans of the second literature club and the band in order to escape from her problems and come to terms with them at her own rate, but along the way she encounters a series of happenings that make her think very carefully about what to do next.

One of the most interesting parts comes towards the end of the second chapter of the game, when Chie and Shika come into contact with a mysterious, cheerful-looking girl named Midori.

The pair’s first encounter with Midori comes as she is having second thoughts about joining a religious cult, and it becomes apparent that despite her cheerful exterior, Midori is a deeply troubled young girl, expressing her displeasure and disillusionment with her life through self-harm and running away from home.

Chie and Shika soon discover the reason for this — she is the daughter of a Yakuza family and wants desperately to escape a home life where she feels like she doesn’t belong. So she does, first running away to another religious retreat, then later moving in with Chie, and finally moving into her own house and trying to get her life on track as an independent young girl.

Midori is an extremely strange individual with a habit of coming out with very strange utterances, but it’s clear that Chie respects her courage and willingness to at least try and do something to improve her situation — even if she doesn’t necessarily agree with her methods, or indeed understand her at all at times.

The key moment for Chie comes the last time we see Midori in the game. Chie and Midori have a conversation, the crux of which is Midori telling Chie that she’s too kind and too willing to sacrifice her own happiness for the greater good, and that it’s okay to be selfish sometimes. It takes courage to be selfish, though, and courage is one characteristic that Chie lacks somewhat. 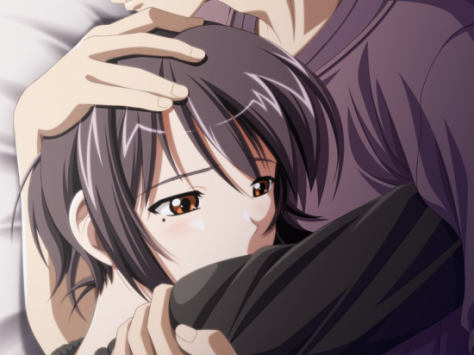 Despite her headstrong attitude and mature demeanor when in public, it becomes particularly clear when we see her alone with Shika as their relationship develops that she’s actually quite timid and nervous inside. Indeed, the first time Shika and Chie make love, Shika constantly worries that he’s actually “raping” her, despite the fact that she clearly said he could do it if he wanted. Note the wording though — “if he wanted.”

By the end of the game, Chie’s problems are far from over — she’s anxious about Shika leaving her in the same way that her father left her family, for example — but she’s grown as a person, both with Shika’s support and everything she’s learned from her experiences with the band.

We leave her as she’s about to go and see her father for the first time since he walked out on the Isurugi family. She’s taking those first tentative steps into a world where she has the courage to sometimes do what she wants to do and express what she’s feeling, instead of simply acting the way everyone expects of her as an “older sister.” It’s a fitting conclusion to a touching and very human tale.

One thought on “From the Archives: Kira Kira Hikaru”