As Valentine’s Day rolls around once again, I find myself keenly aware that not everyone in this world is fortunate enough to be blessed with a partner, lover, spouse or otherwise significant other as understanding, tolerant and patient as my good wife.

But the process of picking a waifu is not a scientific one, nor is it as simple as seeing an attractive woman and feeling a sexual attraction. It is, for many, a deeper sense of connection with a character on an emotional level; a desire for that character to be real and part of one’s life.

Or it might just be a bit of dumb, silly fun. Either way, here are ten waifus I’ve loved over the years.

Ms. Hapgood, female lead of Indiana Jones and the Fate of Atlantis by LucasArts, may not be a character of Japanese origin, but it would be remiss of me not to mention her in any discussion of waifus because she is almost entirely responsible for 1) my love of redheads and 2) my enjoyment of spunky female characters who don’t take any shit from anyone.

In many ways, Sophia was a proto-tsundere in that she was thoroughly hot-and-cold towards Indy over the course of the whole adventure, though naturally, this being an Indiana Jones adventure, the two were locking lips by the end of the experience. I really enjoyed the rocky road their relationship took, and I found the exploration of this to be one of the most surprisingly compelling aspects of the whole game.

Mikae from Parsley’s True Love (localised by JAST, way back in the early days) was several “firsts” for me. She was one of the first characters I encountered in one of the first visual novel/dating sims I’d ever played, and she was also my first real encounter with the common Japanese trope of the “childhood friend”.

She was also a pleasantly grounded, down-to-earth sort of character that I enjoyed the experience of “virtually dating”, and she also brought back a few bittersweet memories of a childhood friend of my own who moved away when I was quite young. Ah, what might have been… 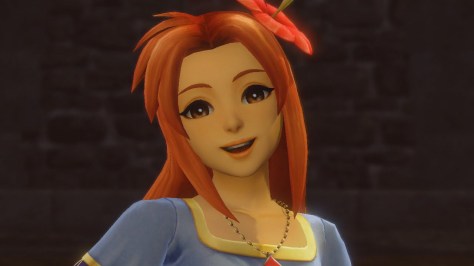 Marin, from The Legend of Zelda: Link’s Awakening, is indisputably Zelda’s best girl in my own imagination. While she may have been little more than a tiny, pixelated sprite that you didn’t actually spend a whole lot of time with over the course of the entire adventure, she was presented in a charming enough way to make her extremely memorable — and to make leaving her behind at the end of the game an extremely bittersweet experience.

I was delighted to discover Marin reimagined as a full, colourful 3D model in a DLC package for the Wii U’s Hyrule Warriors recently; while she may not have any of her own full-on story content to explore, her modernised depiction is just as charming as the tiny, blocky girl I fell in love with all those years ago. 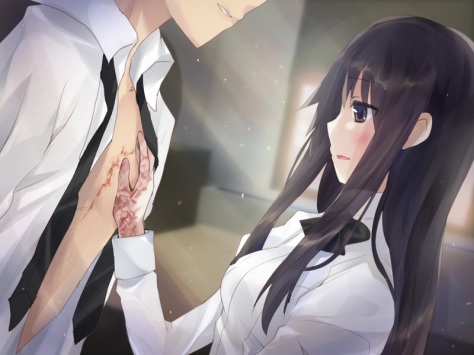 I came across Katawa Shoujo at exactly the right time in my life. My first marriage had fallen apart and I was suffering from terrible loneliness and a considerable amount of social anxiety. My confidence had been completely shot, in other words, and I didn’t know what to do.

So you can imagine how I felt when I came across a character who was suffering from terrible loneliness, a considerable amount of social anxiety, shot confidence and an inability to know quite what to do in almost any situation. Granted, Hanako’s reasons for feeling this way were rather different to my own, but mental scars can have as profound an impact on one as physical ones.

Before I played My Girlfriend is the President (also known as Osananajimi wa Daitōryō), I had a kind of vague awareness of the concept of “moe” but hadn’t really thought about it all that much. By the time I’d finished my first playthrough, however, in which I pursued the titular “girlfriend’s” route, I had a thorough understanding of what it was all about.

Yukino combined cuteness, sexiness, good humour and absolutely charming sweetness to create a wonderful character that I defy anyone not to fall completely head-over-heels in love with. She has a profound impact on the game’s protagonist, softening him from a fairly obnoxious pervert into someone who can hold his head high for standing to his principles, and she makes a delightful focal point for the rest of the game’s silliness.

I’d never played a Tales game prior to my first experience with Tales of Xillia, but I almost immediately fell for leading lady Milla Maxwell. Initially presented as the earthly manifestation of a godlike entity — with the actual explanation being rather more complicated than that — Milla is both charmingly naive and bitingly accurate in her observations of “the human world”.

A big part of her appeal for me was actually down to her somewhat divisive, deadpan delivery by English dub actor Minae Noji. Not everyone appreciated Noji’s depiction of Milla in this way, but I found it absolutely in keeping with her script — frequently laugh out loud funny, and always someone I was delighted to hear from.

The Neptunia series already had its hooks in me by the time I came to mk.2, but Nepgear’s role as the lead character in that game made me a fan for life. This was a series that charmed me with its entertaining characters, its biting satire and its genuinely amusing comedy — and the fact that Nepgear is always depicted as the sort of character I think I’d get along famously with in real life was the icing on the cake. 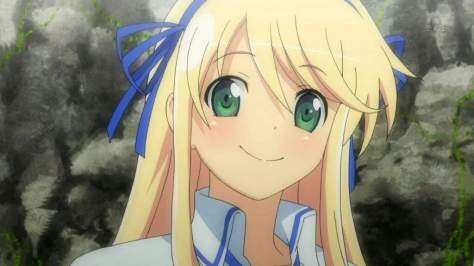 It’s honestly difficult to pick just one character from Senran Kagura that is my favourite, but if pressed, I think it would have to be Katsuragi.

Katsuragi is referred to by her friends as “Katsu-nee”, suggesting they see her as a “big sister” sort of character, despite her frequent displays of rather childish (albeit sexually provocative) behaviour. It’s a good description, however; when she’s not chasing down her classmates to play with their boobs, she’s often acting as something of a voice of reason and holding the group together with her good nature and considerate attitude.

In other words, she’d be an amazing big sister.

I have a soft spot for pretty much all of the heroines in the Grisaia series, but Amane captured my attention almost immediately with her Amazonian stature and figure, her unabashed, open attitude towards discussing all things sexual, and her sense of responsibility towards the people who were important to her.

As her narrative progressed and more came to light about her, this character that I already found appealing became incredibly sympathetic, too; she’d endured unimaginable hardships, and in fact was continuing to do so, partly through her own feelings that she needed to be “punished”. But that’s a discussion for another day when we look at her character in detail as part of Grisaia’s Cover Game feature!

Protagonist of the wonderful VA-11 HALL-A, Jill is a fabulous character simply because she is so utterly relatable to anyone over the age of 25 or so. At the time of VA-11 HALL-A’s story, she’s going through that stage in her life pretty much everyone endures in their mid-20s where you find yourself wondering if the choices you have made so far are really the best possible life decisions you could have come to.

As we learn about Jill, we get the sense that she’s utterly exhausted with the pace of modern life, and just wants to hole up in her increasingly cluttered apartment with her cat, her accumulated junk and her pornography. We’ve all had days like that — but Jill also shows herself to be a loyal friend and considerate confidante to her clientele, too, making her one of the nicest (and charmingly flawed) characters in recent gaming, without ever crossing that line into becoming sickly-sweet about it all.

One thought on “Waifus I Have Loved”