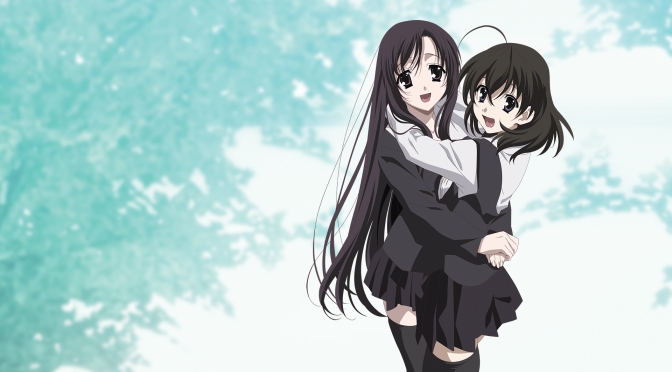 School Days HQ is a visual novel/interactive movie from STACK and 0verflow, localised by Sekai Project and published by JAST USA.

It’s a remastered remake of an earlier title from 2005, simply called School Days, and is rather notorious for all the wrong reasons — specifically, its violent tragic bad endings, which I won’t spoil here.

This article isn’t going to describe or analyse the overall plot in depth; rather, I’d like to talk about what School Days shows us about the possibilities and challenges a branching narrative offers to content creators, and what other games might be able to learn from the visual novel genre in general in this regard.

This article was originally published on Games Are Evil in August 2012 as part of the site’s regular READ.ME column on visual novels. It has been republished here due to Games Are Evil no longer existing in its original form. 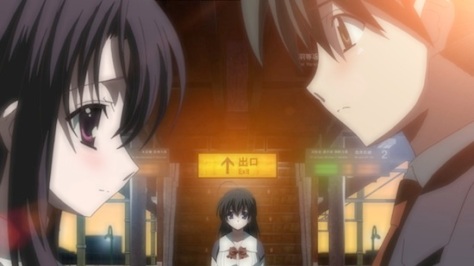 To establish some context, however, it’s necessary to describe what School Days is all about — rest assured, however, that if you’re planning to play this game yourself, none of this constitutes a spoiler.

As with many other visual novels, it focuses on interpersonal relationships. Itou Makoto is your everyday floppy-haired Japanese high school student, and he likes Kotonoha, a beautiful, shy girl that he sees on the train every day. When his classmate Sekai — the opposite of Kotonoha in almost every way except gender — discovers a photo of Kotonoha on Makoto’s phone, she hatches an elaborate plan to get them together with one another, but steals a kiss from him as payment for her intervention. Thus begins an incredibly complex web of relationships, romance, sexuality, lying, cheating, deceit and all the other things that a successful high school career should involve.

Don’t believe me when I say “complex?” Check out the in-game “route map,” which displays all the possible branches down which the story can proceed according to the player’s choices.

School Days’ narrative structure is a good example of a form of “chaos theory” at work. Rather than the story branch taken at a fork being determined by the player’s immediate response, all of their previous responses (measured by two meters depicting the protagonist’s level of affection towards Kotonoha and Sekai) are taken into account. What this means in practice is that something that happened several chapters ago can determine down which particular narrative path the story will unfold, and where it will eventually end up. This is chaos theory’s butterfly effect — small differences in initial conditions (what Makoto said when Sekai first asked him why there was a picture of Kotonoha on his phone, for example) can have wildly divergent outcomes despite initially appearing to be following the same path.

What this means in a narrative sense is that sometimes seeing the same content with different material leading up to it can change the context of a scene entirely. What could have been a touching, romantic scene in one playthrough could end up completely heartbreaking to watch in another depending on what the characters had been getting up to beforehand. What the player might consider to be a “good” ending might end up feeling somewhat bittersweet with the additional context provided by alternative pathways. 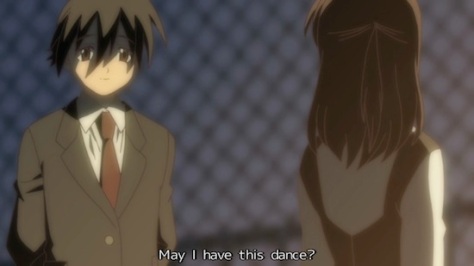 This is one of the most interesting things about School Days’ narrative. It doesn’t follow discrete paths such as those seen in more conventionally presented visual novels. The player deciding to pursue one of the two girls at the outset of the game does not mean that the ending is already determined, not by a long shot. Much like life, anything can happen along the way to throw a spanner in the works — and in interpersonal relationships (particularly those so heavily infused with Japanese melodrama), all it can take is a careless word or a brush of a hand to throw what seems a relatively simple situation into disarray.

The other intriguing thing about School Days’ branching narrative is that the player only gets a relatively narrow understanding of the characters involved in a single playthrough. Some events always occur regardless of which path the story is currently following, but according to the choices the player has made, the context in which they are witnessed (or, in some cases, simply heard about) changes hugely. For example, in some playthroughs, one of the secondary characters leaves partway through the story with little explanation. When following a different path — one where the player gets to know this character a little better — it becomes much more clear why this has happened, and why it’s a big deal. In yet another path, we see this event from another perspective altogether, and its meaning changes once again.

There are few places where this is more apparent than with respect to the three main characters in the story. On an initial playthrough, it’s easy for School Days to seem like a relatively simple high school love story. Makoto and Kotonoha initially appear to be made for one another, so it will be natural for many players to want to pursue that pathway to its conclusion. But it’s not until the player explores some of the more convoluted pathways, riddled with cheating, lying and conflicting feelings, that they gain a greater understanding of Kotonoha, Sekai and Makoto as characters. They are far from the one-dimensional animé tropes that they might initially appear to be, and speaking from a personal perspective, I know that my feelings towards these characters have certainly changed significantly as I’ve grown to learn more about them. 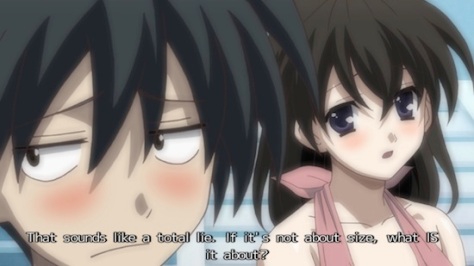 School Days is a powerful, well-executed visual novel because of the way it inspires players to see it through and explore different narrative pathways. The key to this is a strong sense of emotional engagement, which keeps the player feeling enraptured by the story in much the same way a good, long-running TV series does. And it’s for the same reasons — strong, memorable characters getting into a variety of very different situations in which we can learn a lot more about them.

So why don’t we see this level of divergence in more mainstream video game narratives, even in titles typically lauded for their focus on “choice?” Well, one simple (and perhaps rather cynical) explanation is a matter of cost — if you’re going to create content to tell a particular story and it costs thousands or millions of dollars to do so, you probably want to make damn sure that as many players as possible see it, appreciate it and talk about it. It’s much easier to give an illusion of choice, in which there are relatively short-term but non-lasting consequences for the player’s actions, than to offer a truly branching narrative. Look at Mass Effect – the reason that the trilogy’s finale bent so many players out of shape is because they felt all the choices they had made no longer mattered. There was no chaos theory at work; they had simply been fooled into thinking that the decisions they had made and the manner in which they had portrayed Commander Shepard was going to make a difference. Ultimately, though, it came down to “pick your ending.”

While it still costs so much money, time and manpower to put together a triple-A game, the visual novel genre — a sector much better-equipped to deal with heavily-branching narratives — will likely maintain its stranglehold on this style of storytelling. And, with games as enthralling as School Days around, I’m absolutely fine with that; as any fan of the genre will tell you, sometime’s it’s nice to be able to sit back and watch a story unfold while feeling that the choices you make really do matter.

Find out more about School Days HQ on the official website. (As with many Japanese-developed visual novels, the game is intended for adults only due to sexual and violent content, but the site is safe for work apart from a few images in the screenshot gallery.)

10 thoughts on “From the Archives: School Days, Chaos Theory and Emotional Engagement”