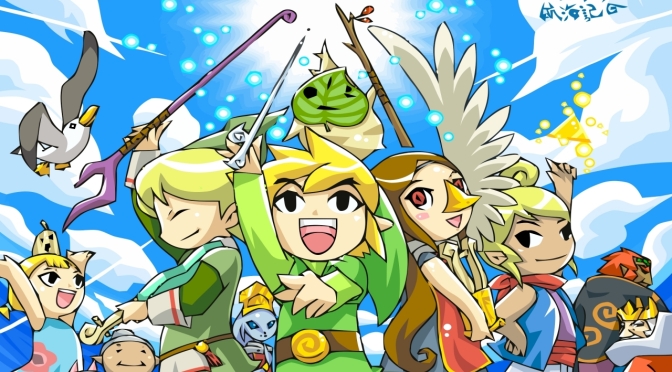 Any time someone claims that Nintendo’s flagship action-adventure-kinda-sorta-but-not-really RPG series The Legend of Zelda is stagnant and doesn’t try anything new, the perfect rebuttal is The Wind Waker.

Originally released in 2002 to a somewhat surprised Gamecube audience that wasn’t sure what to make of its cel-shaded visuals and seafaring-heavy gameplay, The Wind Waker has subsequently proven itself to be a timeless classic in the series as well as one of the most interesting Zelda titles there has ever been.

And with the HD remaster for Wii U, the definitive version of the game now exists thanks to some much needed tweaks and updates as well as full widescreen support and glorious high-resolution visuals. 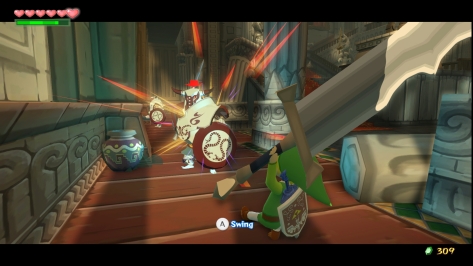 For the unfamiliar, The Wind Waker takes place far in the future of the overall Zelda timeline, in a world that has been almost entirely swallowed by a great sea. The Hyrule of yore is nowhere to be seen, with pockets of civilisation living on a few scattered islands around the vast ocean, occasionally meeting and trading with one another but mostly keeping themselves to themselves.

The Wind Waker’s incarnation of Link lives on the appropriately named Outset Island with his grandmother and his sister Aryll. During the game’s opening, Link, presented as a young boy rather than a teenager this time around, is coming of age, and is provided with the series’ iconic floppy hat and green tunic as a sign of his “becoming a man”.

In true Zelda tradition, Link donning his traditional garb means that it’s not going to be long before bad things happen, and sure enough, right on cue his sister gets dragged off by a giant bird to an imposing island in the corner of the great sea known as the Forsaken Fortress. From here, Link begins his grand quest to uncover the source of the increasing unrest across the archipelagos (spoiler: Ganondorf — hey, they didn’t want to break with too much tradition, after all) and eventually put a stop to it in one of the series’ most dramatic, spectacular finales.

The Wind Waker blends old and new to create a Zelda that is both recognisable as part of the grand series and also one of the most distinctive installments in its own right. You still explore a vast overworld (albeit one almost entirely covered by water this time around) and labyrinthine, puzzle-filled dungeons. You still gradually obtain a series of items, each of which is used extensively in the dungeon in which you find it both to traverse its various challenges and eventually defeat its boss. And you still cut down every bit of grass and bomb every cracked wall that you come across.

But you also methodically chart a vast sea with the help of your sentient boat and helpful local fish. You play golf with gusts of wind and oversized plant seeds. You engage in ship-to-ship combat on the high seas. You frantically battle giant sea monsters before they drag you down into the whirlpool they create and swallow you whole. And, in the grand tradition of any swashbuckling high seas adventure, you find treasure. Lots and lots of treasure.

In many ways, The Wind Waker actually de-emphasises its most typical Zelda gameplay — the dungeoneering and boss-fighting — in favour of its seafaring action and exploration. It is one of the most pure expressions of Miyamoto’s original vision for the series: an attempt to capture the sense of wonderment, mystery and excitement he felt when exploring forests and caves in his youth. It’s a game that is the very embodiment of the concept “what’s that over there?” — whether “that” be an ill-defined hazy shape of an island in the distance, a group of seagulls circling an innocuous-looking patch of water or the unmistakable sight of a treasure chest sitting tantalisingly out of reach atop a rock spire. 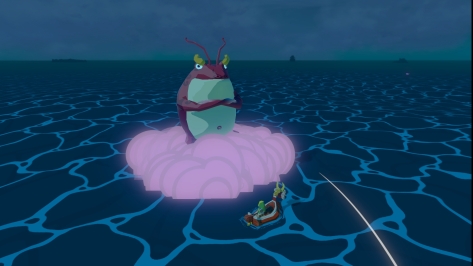 Indeed, The Wind Waker’s main quest is actually fairly short, taking in only a handful of dungeons and a few of the 49 islands across the ocean. The real appeal of the game, however, is in engaging with the fascinating and well-realised world that Nintendo has created, be it through manipulating the various relationships of the inhabitants of Windfall Island to your own advantage, investigating the secret caves that many of the islands hide or simply making use of the various sea charts you acquire over the course of the adventure to track down sunken treasure, myriad Pieces of Heart to extend your life gauge, Great Fairies to expand your abilities beyond their original limits and plenty more besides.

When The Wind Waker is at its most traditional Zelda, it challenges you with dungeons that house tricky puzzles and dramatic, varied combat encounters. A number of new items and techniques are introduced to the traditional mix, too; alongside series mainstays like the boomerang, bow and hookshot are pieces of equipment like the grappling hook (which can be used to swing across gaps, climb up to ledges and steal items from enemies) and the magic shield (which effectively allows you to use your collected Rupees as “hit points”), and all-new abilities such as commanding companion characters to make use of their unique actions in cooperation with Link. The game’s last two dungeons before the grand finale make heavy use of this particular mechanic with two very different companions, and feature some of the series’ most inventive, interesting puzzles as a result.

The Wind Waker isn’t a tough game, though the Gamecube original drew some criticism for a rather drawn-out quest in the latter portion of the game that required you to assemble eight pieces of the Triforce. On the Gamecube, this required you to locate eight charts, get them deciphered by recurring series weirdo Tingle for 398 Rupees a pop, then sail to the appropriate locations to locate the sunken chests that housed the fragments. All in all, it was a somewhat grindy, expensive and long-winded process that many found to be something of a blemish on an otherwise excellent game; the Wii U version, meanwhile, makes this sequence considerably more palatable by requiring you only to find and decipher three charts, with the fragments themselves instead being secreted in the places where the remaining five charts were found in the original.

The Wii U version also addresses a common criticism that, aside from a few head-scratching puzzles, The Wind Waker doesn’t put up much of a fight to the player: from the outset, it’s now possible to play in “Hero Mode”, which causes Link to take double damage and also prevents enemies and destructible items from dropping recovery hearts, meaning you have to rely entirely on fairies and potions in bottles to restore life. While the basic encounters aren’t themselves any harder in Hero Mode, there’s less margin for error than in the rather forgiving normal game, giving an altogether different feel to dungeoneering and boss battles in particular — and especially in the Savage Labyrinth, a 50-floor series of arena battles with very few opportunities to recover in between.

All in all, The Wind Waker HD represents the very best way to play The Wind Waker that exists today. Its gorgeous cel-shaded graphics and beautiful animation retain a timeless quality that has aged considerably better than many of its contemporaries, its gameplay is as strong as ever, and its narrative — not typically the focal point of many Zelda games — is enjoyable and compelling through a combination of its main scenario and the little incidental stories you come across in your explorations of the islands around the ocean.

Every Nintendo fan has their own favourite Zelda, and while opinions may differ on whether you think The Wind Waker is the “best” the series has to offer or not, there’s little denying that it’s one of the most distinctive, interesting and enjoyable takes on Link’s adventures that we’ve seen over time. If you have a Wii U, The Wind Waker HD should most certainly be part of your collection.

Wii U Essentials is a series of articles that each focus on a single retail game from the Wii U’s library. These articles aim to build a comprehensive record of this turbulent period in Nintendo’s history: a time when the company released some of its very finest games, yet it struggled to recapture popular attention and commercial success in the same way as the original Wii did.

2 thoughts on “Wii U Essentials: The Legend of Zelda: The Wind Waker HD”