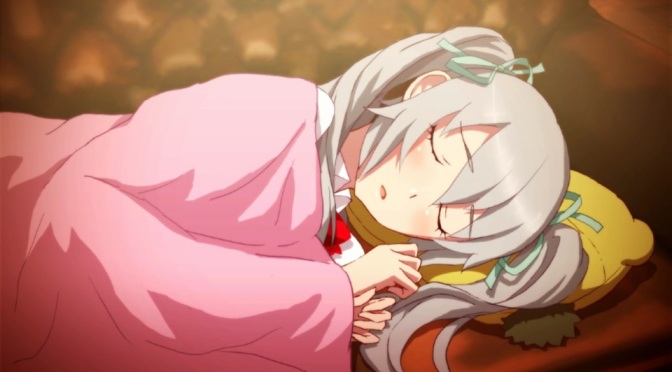 One of video gaming’s great strengths is the opportunity it affords us to truly, interactively immerse ourselves in other cultures.

We talked about this a little while back when we examined how Steins;Gate is positively dripping with the otaku culture of Tokyo’s Akihabara district, even going so far as to include an in-game glossary explaining and defining all the memes, urban legends and specialist jargon that crop up throughout the narration and dialogue.

Steins;Gate is far from an isolated example, however; Acquire’s Akiba’s Trip 2, localised for Western PS3, PS4 and Vita audiences as Akiba’s Trip: Undead and Undressed, also provides you with the opportunity to live the life of an otaku in their spiritual home — and in a somewhat more interactive manner than Steins;Gate’s visual novel stylings.

Oh, and also there are vampires. Kind of.

Akiba’s Trip, as we shall refer to it from hereon, is a curious game. Part RPG, part brawler, part collectathon, part dating sim, part visual novel and part open(ish)-world action adventure, it’s a title that refuses to do things conventionally and, while flawed in a few places, comes out as an enjoyable, memorable experience.

Cast in the role of the obligatory spiky-haired self-insert male anime protagonist (whom you can name as you see fit, and after clearing the game once can also use alternative 3D models — including women and girls — to represent), you’re quickly inducted into the ranks of the “Synthisters” after answering a seriously sketchy job advert.

It becomes clear that things aren’t entirely what they seem, and your base assumptions about “vampires” don’t entirely apply.

Synthisters are essentially man-made vampires who suck the life energy out of humanity for nefarious purposes that don’t become apparent until later in the narrative. Fortunately, before you lose your free will completely, you’re rescued by the game’s main heroine Shizuku, who initially appears to be an honest-to-goodness actual vampire, healing you (and, by extension, dooming you to a life of servitude as her familiar) by sharing some of her blood with you. As the narrative progresses, however, it becomes clear that things aren’t entirely what they seem, and your base assumptions about “vampires” don’t entirely apply to either Shizuku or Synthisters.

The bit about sunlight does, however. Well, sort of. Synthisters have a habit of burning up in sunlight when too much of their skin below the neck is exposed. Consequently, it becomes very apparent very quickly that the optimum means of defeating this menace threatening the streets of Akihabara is to beat them up until their clothes are in disarray, then strip them down to their underpants (or beyond, if you’re particularly skilled), at which point they will roll around screaming for a bit before exploding in a burst of dark flame. Unfortunately, since the events of the game’s intro leave you as a Synthister too, this rather unfortunate Achilles heel also applies to you.

After the initial setup, the game spins an enjoyable but fairly brief tale of how and why the Synthisters came to Akihabara, who is behind the whole plot to release them into the populace and what you, as a member of the “Akiba Freedom Fighters”, a loosely organised group of teens who enjoy spending their days hanging out, playing video games and watching anime, plan to do now that your spiritual home is under attack. Along the way you’ll get to know your various companions in the Freedom Fighters, who include a colourful selection of characters, four of whom have their own unique narrative routes to explore in the latter half of the game.

Through some sensible, non-grindy use of PSN trophies, you’re encouraged to wander around, complete sidequests, go shopping in authentic stores and attempt to collect as many different clothing items as you can.

That’s not all, though. You’re not obligated to romp through the main story as quickly as possible, though you can if you please; Akihabara is a big place, with plenty to explore, and through some sensible, non-grindy use of PSN trophies, you’re encouraged to wander around, complete various sidequests for the locals (and your rather demanding little sister), go shopping in authentic stores that can be found in the real-life Akihabara (although, disappointingly, there’s no 3D recreation of their interiors; all shops are simply represented as “Buy/Sell” menus) and attempt to collect as many different clothing items as you possibly can, either by purchasing them or liberating them from the unsuspecting bodies of Synthisters and thugs that are prowling the streets.

And here we have Akiba’s Trip’s biggest strength by far: its atmosphere. The story is enjoyable and the cast is fun to hang out with, for sure, but the reason to play this game is the lovingly crafted recreation of Akihabara. As you proceed from the Radio Kaikan area — which will be a familiar locale to fans of Steins;Gate — through Electric Town and onwards to the district’s Main Street, then beyond into the side streets that house myriad computer parts shops, you’ll constantly be surrounded by a very convincing ambience. On Main Street, you’ll see and hear the traffic passing by, including buses adorned with colourful moe mascots for computer, console and mobile games; in the side streets, you’ll hear store staff calling out for people to come and look at their wares accompanied by Vocaloid-fronted background music; in high-profile advertising areas such as Electric Town and UD+, huge video screens will display trailers for anime and games as well as footage from idol concerts.

The reason to play this game is the lovingly crafted recreation of Akihabara.

And everywhere you go, there’ll be people. For the most part, these people are nameless stereotypes, defined entirely by the clothes they’re wearing and the label the game assigns to them, ranging from awkward “Otaku” shuffling along the streets trying not to be noticed, to “Privileged Skanks” strutting along as if they own the place. Each and every one can be interacted with, and in a pleasing touch, your actions over the course of the story — along with the trophies you earn, each of which grants a Fable-esque title that people will start addressing you as — will affect the way these members of the public react to you and anyone who happens to be with you at the time. They’ll also react appropriately if you try to pick a fight with them by shoving them out of the way or if you get into a rumble with any Synthisters you uncover: some will cheer you on, some will run away screaming, others will film you on their smartphones, others still will join the melee. It gives the world a lovely “lived-in” feeling and serves a gameplay purpose, too; if you want the trophies that are awarded for collecting certain amounts of clothing types, you’re going to need to look out for specific types of people and either pick a fight with them or unmask them as a Synthister in order to have a chance at stripping them down to their unmentionables.

That clothing is more than just a collectathon, too, though I won’t deny there’s a certain enjoyable thrill to trying to track down rare T-shirts, trousers, skirts and underwear to fill out the in-game encyclopedia. No, you can use it to express yourself through your character as you see fit, and later in the game you can play dress-up with your companion characters as well. One of the sidequests even unlocks the ability for the (canonically male) main character to cross-dress if you so desire, too, though the game draws the line at allowing you to put on ladies’ underwear unless you’ve actually chosen a lady model for your avatar. Surplus equipment can be used to enhance the protective abilities of your clothing as your little sister weaves her seamstress magic; it’s never quite explained what she’s doing with all those pairs of trousers you keep bringing her, but the stronger your clothes are, the more HP you have and consequently the more likely you are to survive your next encounter with a group of Synthisters.

Despite the emphasis on stripping your enemies bare, Akiba’s Trip is surprisingly light on the ecchi content.

Despite the emphasis on stripping your enemies bare, Akiba’s Trip is surprisingly light on the ecchi content. Indeed, the strip scenes tend to be more slapstick and amusing than either violent or erotic — particularly if you equip one of the various custom animation sets you’ll acquire over the course of the game, many of which take heavy cues from anime, manga, kung-fu movies and professional wrestling. In fact, the only content in the game that is particularly ecchi at all comes when you defeat major bosses. Here, assuming you rather than your partner was the one to strip their clothes off, you’re rewarded with a rather beautifully drawn image of them in the midst of being disrobed. And in a nice nod to inclusivity, you’ll defeat both male and female characters in this manner, meaning despite the canonically male nature of the protagonist, there’s plenty of scantily clad eye-candy for the ladies to enjoy too.

Overall, then, Akiba’s Trip is a peculiar little game that is a lot of fun to play through. It’s not perfect, by any means — the Vita version in particular struggles to load NPC models in a timely fashion, meaning many characters are represented as a generic “male” or “female” symbol until you get close to them, and when you first enter an area it will appear to be completely deserted — but the combination of the spectacularly well-realised atmosphere, the entertaining plot, the fun characters and the enjoyable blend of gameplay styles make it a title well worth experiencing… not to mention a great means of getting a sneak preview of Akihabara before perhaps one day making an otaku pilgrimage of your very own!

5 thoughts on “Adventures in Akihabara”