The racing game genre is one area of gaming where, outside of graphical and performance improvements, I suspect it’s always felt quite difficult to innovate.

After all, the fundamental concept of “two or more things moving in the same direction at high speed, with one attempting to get somewhere before the other one in order to receive some sort of reward” has been around pretty much as long as human civilisation. So what else can you do with that?

Well, says Tokyo Highway Challenge (aka Tokyo Xtreme Racer, aka Shutokou Battle) for Sega Dreamcast, why not rethink the fundamental means through which a winner is decided? Let’s take a closer look at how that works. 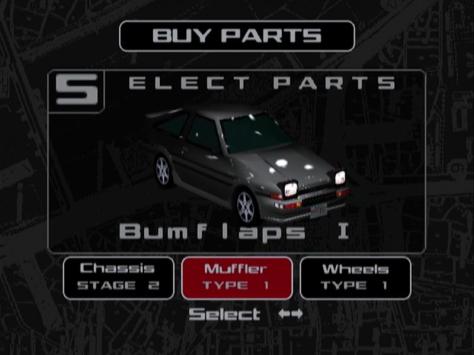 Tokyo Highway Challenge on Dreamcast is actually part of a much larger, more long-running street racing series by developer Genki that has passed between several publishers over the years. It started back on the Super Famicom and saw several installments on both the Sega Saturn and Sony PlayStation, but the Dreamcast installment is where it really carved out a distinctive identity for itself.

The series as a whole is heavily inspired by the popularity of street racing on Tokyo’s Shuto Expressway Bayshore Route in the mid-’90s — a phenomenon that, although illegal, quickly captured the public imagination. Popular culture reflected this interest through manga and anime such as Wangan Midnight and Initial D, and in movies like the five Shuto Kousoku Trial films. Worldwide interest in the phenomenon and related media — including the Shutokou Battle series — prompted Western developers and publishers to explore the idea of street racing, too, leading to popular releases such as EA’s Need for Speed Underground series, Rockstar’s Midnight Club games and THQ’s Juiced. 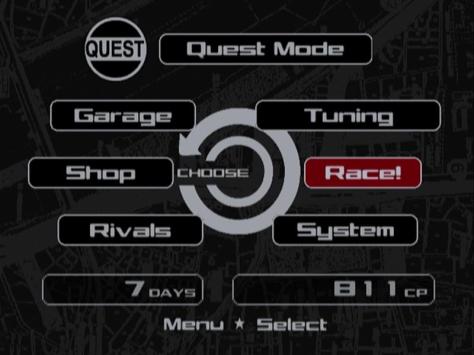 In Tokyo Highway Challenge, you take on the role of an up-and-coming wannabe street racer just joining the scene on the Shuto Expressway. You start the game’s main “Quest” mode by purchasing a car, and then it’s straight onto the highway with you to seek out your first victims, since you likely won’t have much money left for upgrades after your initial purchase!

Once out onto the road, Tokyo Highway Challenge unfolds in two distinct components. The “Free Drive” mode sees you driving around the Expressway in one of two directions, chosen before you leave, and looking for opponents. Upon discovering a potential opponent (conveniently marked on your map, and with a big floating “R” for “Rival” above their car’s roof) you flash your headlights at them with a tap of the B button, and then it’s into “Battle” mode with you. 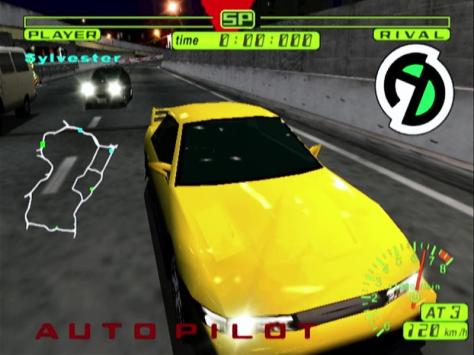 Winning a “battle” in Tokyo Highway Challenge isn’t quite like winning a race in other driving games in that you’re not trying to get to a finish line first. Rather, you’re trying to deplete your opponent’s stock of “Speed Points” or “SP”, which is achieved by being in front of them. Throughout the duel, SP constantly drain from the trailing car, with the rate of SP loss determined by how far ahead the leading car is. There is no way to restore lost SP during a battle; your only “defence” is to get back in front of your opponent and empty their bar before they completely drain yours.

This unusual race structure is presented quite like a fighting game, with bars extending out from the top-middle of the screen to reflect each competitor’s remaining SP. And, as you might expect, it leads to quite aggressive racing, too; trailing opponents will need to take every opportunity — however underhanded — to get ahead of their rival, while the car in the lead will need to do everything they can to block their rival from overtaking, and preferably to get them caught in the occasional civilian traffic that is still on the Expressway at this time of night.

The real strength of this system is that it means every “race” in the game feels a little bit different. Despite the fact that there are only two real “tracks” in the game — the two opposite directions around the Expressway — each race tends to only unfold over a quarter of the complete circuit at most, meaning there’s a surprising amount of variation from encounter to encounter, particularly when you bear in mind the differing strengths and driving styles of your opponents.

The driving model of Tokyo Highway Challenge is somewhere between arcade and sim. You need to slow down for corners — particularly the nasty 90-degree bends in a couple of places — but you can also kind of bounce your car around without penalty as there’s no damage model whatsoever. This also provides the opportunity for absolutely filthy dirty racing if you feel the need — and against some of the tougher opponents, playing dirty is night-essential, particularly when your car is a bit weaker! 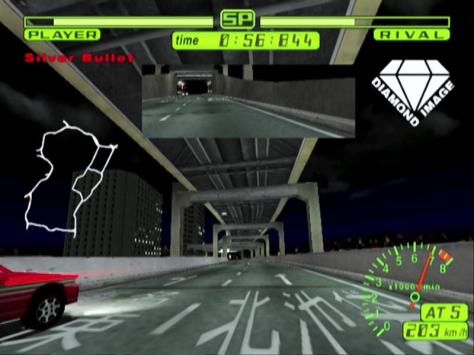 The overall metagame of Tokyo Highway Challenge sees you attempting to defeat as many rivals as possible. Your rivals are split into clubs of four people; defeating the three main club members causes the club boss to take an interest in you, at which point you can race them for an attempt to shut the club down. Defeat several club bosses and one of the four “Devas” who rule the Expressway will challenge you; defeat the four Devas and you’re the master of Tokyo’s street racing scene. At least until the four Devils show up, anyway.

At any point during a night on the roads, you can pull off the road to return to your garage and do some work on your car with the “Construction Points” or “CP” you’ve earned through racing. Various components of your car can be upgraded through several stages, and visual customisations such as spoilers, bumpers and side skirts can be applied, and higher-level customisations allow you to tweak the performance of your car in various ways. This isn’t Gran Turismo, mind; the tuning settings are all easily understandable and well-explained in the menus.

You can also purchase new cars if you have the CP for them, but they’re very expensive, so you’ll likely find yourself stuck with your starter car for a considerable length of time. It’s worth gradually upgrading rather than trying to save up for a new car immediately, since as you shut down more and more clubs you’ll be facing fiercer and fiercer opponents out on the roads — and while they’re worth more CP for a victory, you’ll need a decent car to be able to take them on.

There’s an element of risk versus reward when it comes to challenging racers on the roads. The first time you challenge an opponent, a victory will net you five times the opponent’s “value” in CP — but if you lose or draw the race (the latter occurring if you accidentally take an alternative route by pulling off the road or taking the wrong turning at the single “split” point on the circuit) you will never be able to get that multiplier ever again. Each subsequent race against the same opponent drops the multiplier by one, so just racing the same foe over and over again isn’t really worth it after a while — although it is an option if you’re happy to grind.

And that’s really what Tokyo Highway Challenge boils down to — it’s a very grind-heavy game. You don’t really discover anything other than new cars and new opponents as the game progresses and the scenery never changes, but there’s an inherent satisfaction in the sense of gradual “power creep” that comes from upgrading your car a little bit at a time. If that’s the sort of thing you’re into, this is a game that can potentially keep you busy for a very long time. If you crave variety, however, this may not be the game for you!

If it sounds even a little bit interesting, though, give it a chance; the seeming lack of variety becomes less of an issue than you might think after just a short period of play as you find yourself immersed in the never-ending task of shutting down your rival clubs — and if nothing else, the enormously catchy Eurobeat-style music that plays during the battle sequences will keep your toe tapping as you race.

It might not be a game you want to play every day — but when you just fancy a bit of night-time racing without any real frills or need for commitment about it, the slick racing action of Tokyo Highway Challenge is hard to beat.