Despite being a direct sequel to Atelier Rorona: The Alchemist of Arland, Atelier Totori has a markedly different atmosphere to it.

This is put across in a variety of different ways. The main protagonist is a much quieter, gentler sort of person than the rather noisy Rorona; the overall narrative is melancholy in contrast to the relative “franticness” of Rorona’s tale; and this change in mood is very much reflected by the soundtrack.

Once again primarily composed by Ken Nakagawa, with additional contributions from Kazuki Yanagawa, the score to Atelier Totori: The Adventurer of Arland brings back some classic themes as well as introducing a variety of new ones. We’ve already heard several variations on “Following the Footsteps” when we looked at the game’s worldbuilding… so let’s pick out a few more favourites and have a listen!

Let’s not break with tradition; we begin with the game’s opening theme, heard during the introductory animation. This immediately establishes the mood we can come to expect from Atelier Totori; the synth passage that introduces the whole thing after the gentle sound of rippling water gives an air of melancholy, though the lilting lyrics, when they join, provide a sense of hope.

The lyrics themselves concern, as you might expect, going on a journey — and questioning why one might go on such a journey. For whose sake are you travelling? What do you hope to achieve with your journey? And will the many wonders of the world provide relief from the sadness in your heart? 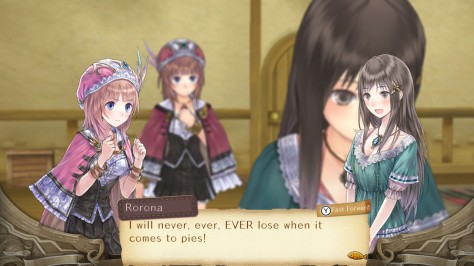 This track is an immediate contrast from the opening theme. Tending to accompany more upbeat, cheerful scenes between Totori and the people she accompanies on her way, the twangy, bendy guitar notes accompanied by the rustic whistle sounds provide something of a party atmosphere; perhaps reflecting the feeling of a seaside festival in Totori’s home village of Alanya.

Nakagawa tends to make use of different instruments to reflect different characters in this particular soundtrack, and the breathy whistle sound, in this case, is primarily associated with Totori herself — it can be heard throughout the whole soundtrack in one form or another.

The Waves Call My Name

This piece, which is the standard background music for Totori’s home village Alanya, is a really interesting track. It’s got a rather wistful tone to it, and is very much different from the cheerful piece that we heard reflecting the city of Arland in Atelier Rorona — and indeed which makes a return later in Atelier Totori.

While the piece has cheerful, playful elements to it, there’s a slight sense of unease about it, brought about by the minor tonality in places and the use of the tremolo strings. This can be seen to be reflecting Totori’s discomfort and dissatisfaction at her life, and her desire to find out the truth — as well as certain revelations which are dropped a little later in the narrative.

Atelier Totori’s standard battle theme is one of my favourite in the whole Atelier series. It brings with it a sense of drama and energy that is a noticeable contrast to the rather gentle feel of many other tracks in the score, but it remains consistent in feel — thanks in part to its clever use of instrumentation.

Totori’s whistle sound can be heard in there, as can an accordion-like instrument that is frequently heard elsewhere in the soundtrack. This is one of many ways that the soundtrack as a whole is quite “marine”-themed — the accordion (and instruments like it, such as the melodeon and concertina) is very much associated with stereotypical depictions of sailors at sea, singing shanties while they work.

We’ve got to have a “working” theme in there somewhere, haven’t we? Totori’s is another good example of Nakagawa and company making use of specific instruments to create a mental image in our mind. We’ve got the accordion used once again to create a rather “nautical” atmosphere to reflect the fact that Totori’s workshop is by the sea — you can even hear the waves crashing at various points — and Totori’s iconic whistle sound to complement it.

The whole thing has a rather waltz-like feel to it, which is in keeping with the Germanic feel of the Atelier series as a whole, and the Arland subseries in particular. The overall tone of this track is also rather more laid-back and subdued than Rorona’s “working” theme in Atelier Rorona, which is another way in which the game emphasises the strong differences in personality between its protagonist. This is particularly driven home by the fact that later in Atelier Totori, you can visit Rorona’s workshop, and her music plays there just as it always did.

The theme for Melvia reflects her personality nicely. The trombone slides throughout the piece are rather reminiscent of classic trombone-centric pieces with lewd implications, such as David Rose’s “The Stripper” — and this is entirely appropriate for Melvia, who flashes her pants more than anyone else in the cast, spends the entire game wearing little more than a bra up top and is clearly perfectly comfortable making inappropriately sexual comments to her underage companions. Especially when the easily embarrassed Mimi is around.

The use of trombone as Melvia’s iconic instrument is also similar to how we heard it used in “Noisy” from Atelier Rorona’s soundtrack. It’s an inherently playful sort of sound, and Melvia is nothing if not playful. While initially positioned as a sort of “older sister” character, it becomes clear very quickly that Totori takes her adventuring life a lot more seriously than Melvia does — at least it seems so at the time the story unfolds.

By contrast, the rather “traditional” feel of Mimi’s theme is very reminiscent of “Sublime Maiden’s Love”, the theme for Lily in Mana Khemia 2: Fall of Alchemy. The instrumentation for both tracks brings to mind pieces of music that were composed for the characters’ own personal chamber orchestras — they are aristocrats, after all — though Lily’s makes use of the rather refined triple-time waltz rhythm, while Mimi’s makes use of a more straightforward quadruple-time feel. 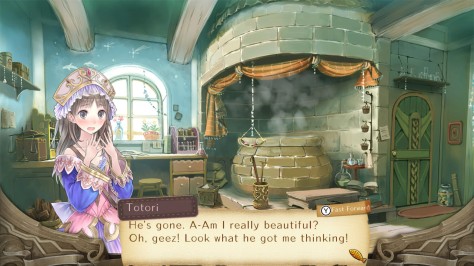 Totori Goes Into a Panic

I feel like it says a lot about your character when the piece of music that depicts them “going into a panic” is a playful piece where flute, bassoon and xylophone bash out a cheerful melody, rather than something that induces actual feelings of panic.

While Totori does lack somewhat in self-confidence — particularly towards the outset of the game — one thing that can be said in her favour is that she usually keeps a reasonably cool head in a crisis, with the extent of her “panics” tending to amount to little more than “um, um, what shall I do?” rather than “HOLY SHIT WE’RE ALL GOING TO DIE”. Or something similar.

This track, which accompanies the first major “story boss” in the game, provides a good sign that things are starting to get “real” for Totori. She’s no longer wandering the lands surrounding Arland and Alanya hoping she might stumble across a clue as to her mother’s whereabouts — now she not only has a clear-cut goal to cross the ocean, but she has both the determination and the means to achieve that goal.

Despite being a battle theme, Try is more a theme of hope. We have hints of the nautical themes from earlier in the game — it is a battle at sea, after all — and the overall major tonality makes it feel like a fight that Totori has to win. I just hope you remembered to bring a good stock of bombs with you…

The theme to the game’s final story boss is also something of a theme of hope — though it does accompany a much more challenging fight! The instrumentation provides a bit more of a sense of threat here than “Try” did, however; we’ve got some pipe organ and full orchestra going on to reflect the severity of the situation in which Totori and her companions have found themselves.

However, the fact that the piece is based on the melody of “Pilgrimage” provides a wonderful sense of Totori’s journey finally coming to a close. This is the last thing she needs to do in order to get some closure on the quest that has been weighing on her mind for the last five years; it’s the end of her own pilgrimage.

Was it all worth it? Well, that’s down to how well you guided our little Totori on her journey, now, isn’t it, dear player…?

4 thoughts on “The Music of Atelier, Vol. 7: Atelier Totori – The Adventurer of Arland”