The rise of the Internet caused a quantum shift in how we enjoy our media. And magazines were one of the areas most affected by this change.

Whereas we once got most of our relatively up-to-date news and information on our hobbies from glossy periodicals, today we simply hop on a website and read the headlines, check our feed readers or get angry at things on Twitter.

That doesn’t mean there’s no place for magazines any more, however — I’ve long been a believer in this. In fact, I believe magazines now have a new, distinct and worthwhile purpose which is well worth exploring. Which is why I was so excited when a creator named Tango reached out to me last week, offering me a look at the first issue of her new publication, TangoPunk. So let’s explore that first issue together!

I settled down to enjoy the first issue in my “retro room” study, surrounded by old Atari and PC games. I would have enjoyed it in the toilet, as is tradition for printed publications, but sadly my bowels were not in need of evacuation at the time, so the study it is.

The zine makes a vibrant first impression with its large PC-98-inspired artwork, its retro backdrop and its distinctive typeface. Look in more detail and you’ll see a list of games that I doubt anyone would have ever expected to see together on the cover of a printed publication, plus a prominent warning for 18+ content. There’s not a lot of adult content in this issue, but I heartily applaud Tango for thinking long-term and being very much open to the idea of discussing the explicit side of interactive entertainment. As regular readers will know, games with 18+ content don’t get much — if any — love from the mainstream media, so it’s always nice to see them acknowledged and celebrated.

Tango’s introductory pages and initial editorial message set the tone nicely. She describes how she had become frustrated with the “plain, safe and tedious” nature of modern hobby magazines, and decided to embrace the idea of a “punk” publication, focusing entirely on the things that she finds interesting and noteworthy, and fuck what anyone thinks. (Except the people kind enough to support the zine, of course; Tango cares what those people think.)

Of particular note is Tango’s philosophy behind the magazine: “even if you have zero interest in anything contained in this zine, I hope you will at least think it’s a piece of odd memorabilia worth keeping”. And herein lies the importance of print media like this in our modern digital world: rather than being up-to-date periodicals like they used to be, they can now be their own, self-contained cultural artefacts and curiosities that we can return to and enjoy again at any time. This is actually the philosophy I take here on MoeGamer; I make a specific effort to write things that people can come back to and enjoy at any time, not just when they’re “current”. It’s why I rarely do “news” posts. 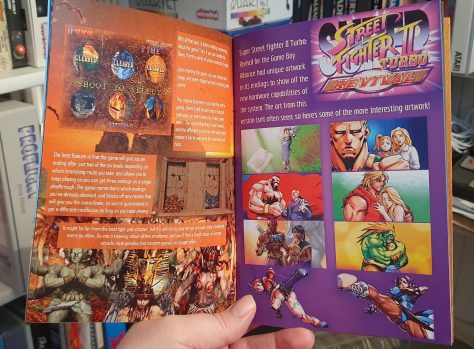 Here’s a good example of the colourful pages and authentic ’90s-style layout Tango has used throughout the zine. While the words are important, this is a visual medium, and thus the use of vibrant colours and attractive screenshots are very important. She’s made excellent use of the available space to both provide interesting information and maintain interest with colourful visuals.

Of particular note is the feature on Super Street Fighter II Turbo for Game Boy Advance; a lot of “lesser” ports of popular games don’t get a lot of love, particularly when looking back at gaming history, so it’s always great to see the unique aspects of these versions celebrated like this.

I’m a big fan of the “Research Notes” section, which reminds me of the hyper-specific hints and tips readers would send in to publications like Atari User. If you’ve never had the pleasure, these sections were typically comprised of reader-submitted letters helpfully informing their peers that in this one specific game, if you did this one specific thing at the right time, then something mildly interesting might happen.

Then we follow up with a close look at what’s going on inside Microsoft Flight Simulator’s windows. Fun fact: when I landed at my old school during an early flight, the auto-generated scenery made it look like it had turned into the world’s largest shoe shop. 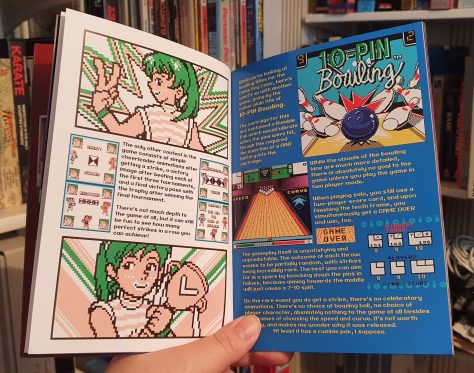 Hearty respect to anyone who does a three-page feature on an obscure Game Boy Color bowling game and blows up that lovely low-colour pixel art to have gorgeous crispy edges. Look at the jaggies on that girl’s hair, they’ll have your eye out.

This section is a great example of Tango’s “punk” philosophy; while she doesn’t particularly rate the game in question, she found it interesting enough to want to write about — and it’s a safe bet no-one else has done a feature quite like this.

The most “timely” content in the zine comes in the form of the “LCD Diary”, which I like a lot because it reminds me of the old “back page” columns you used to find right at the end of a lot of ’90s gaming magazines. Rather than necessarily sticking to a particular subject, it’s just something written from the heart, providing an opportunity to enthuse about a variety of things — or perhaps blow off a bit of steam.

Today we’d typically use blogs or social media for this, since they allow us to express those thoughts as they happen, but it’s fun to see a selection of these snippets all compiled together in this way. Also I can painfully relate to all the things Tango felt she “had” to spend money on this month.

This is another feature that really brought classic ’90s magazines to mind — a direct comparison between two versions of a game, in this case Jurassic Park for the NES and the Game Boy. Rather delightfully, the Game Boy pages are printed in complete greyscale while the NES pages are full colour.

The screenshots are super-sharp, though, and really highlight the differences between the two platforms — including some areas where the humble Game Boy beats its big brother. This is something that would have been very challenging or even impossible to do “back in the day”; before widespread emulation and video capture, magazine screenshots had to be done with an actual camera, and you can surely imagine how much of a mare taking a photo of an original Game Boy in action was.

We wrap up with some final thoughts from Tango, some thanks for the people who have helped make the project possible, and a cracking pair of honkers. I was also honoured with a personal message from Tango herself right on the thigh. Perfect.

Tango’s done a great job with this zine; it simultaneously captures the look and feel of classic ’90s publications while also having a pleasantly modern, personal touch to it. Tango herself describes it as having come out “more like a physical blog than the pure article collection [she] initially expected”, but to be honest, that works really well. This feels like something an individual has poured their heart, soul and free time into, and is something I’d love to see more of.

And if you’d love to see more of it too, you can support the zine on Patreon, where a pledge of $9.50 (£7) a month will get you an issue every 6-8 weeks. Remember this is a personal passion project for someone rather than a periodical churned out by a big corporation — and other similar zines can cost $15-20 per month or more. Printing and distribution costs aren’t cheap for an individual — believe me, I know, having experimented with a few different solutions — and so $9.50 very much seems like a reasonable price. Hopefully this will allow Tango to cover her costs and have a little something extra to put in her pocket after the fact.

Huge thanks to Tango for sending me a freebie of the first issue. I’m off to subscribe right now.

3 thoughts on “TangoPunk: The Zine Scene is Alive and Well”