Good morning! I’m here bright and early today to share some exciting news with you, fresh out of the 2020 Tokyo Game Show and courtesy of the lovely folks at PQube and Inti Creates.

The original Gal*Gun — the direct prequel to Gal*Gun Double Peace, and a game which was never previously released in the West — is finally coming to English-speaking audiences in 2021, as part of the series’ 10th anniversary celebrations. This newly remastered version, known as Gal*Gun Returns, will be released on Nintendo Switch, Xbox One and PC via Steam. PlayStation 4 is, quite understandably, being left out in the cold, presumably due to Sony’s amorphous and nonsensical content policies with regard to sexually provocative content.

This is exciting news! So let’s take a closer look at what we can expect from the newly localised version.

Much like in its sequel Gal*Gun Double Peace, in Gal*Gun you take on the role of a character who inadvertently finds himself becoming “super popular” with the local girls thanks to a young angel’s botched intervention in his love life. Your job is to safely get him to the end of the day by shooting girls with his new-found “Pheromone Shot” powers, and hopefully end up with the love of his life. The actual love of his life, not just the first girl who happens to throw herself at him.

The game, if you’re unfamiliar with it or its successor, unfolds as a modern take on the light gun shooter combined with a stat-based dating sim. There are more than 70 characters in the game for you to romance; the main cast have visual novel-style narrative routes for you to follow along, while the secondary cast members can all be pursued by manipulating your stats into ranges that they find appealing. There are also additional game modes that can be unlocked by meeting various conditions, as well as “secret” girls who will take a bit more effort to romance!

The new version will feature all the content from the original Japanese PS3 version, plus all its original DLC included, revamped models with additional detail in areas such as hairstyles, full voice acting for all the characters, brand new CGs that take the total gallery up to a whopping 250 images… and a staggering 423 pairs of panties for those interested in what lies beneath.

I’ve not played the original Gal*Gun — the PS3 original requires substantial Japanese knowledge to appreciate fully — but if Double Peace and Gal*Gun 2 are anything to go by, you can expect much more from the experience than just a cheeky, silly, ecchi shooter; developer Inti Creates has spent time and effort crafting a well-realised and entertaining little world populated with a variety of memorable characters, each of whom have clearly been given some genuine thought. Every character you encounter in Gal*Gun is unique; no-one is a “generic” enemy or background character.

It’s a genuine delight to hear that this game is finally coming West in enhanced form for a variety of platforms. Ever since Gal*Gun Double Peace thoroughly surprised me by being a considerably more substantial experience than I was expecting given my limited prior knowledge, I’ve been curious about where it all began. I’m especially curious to get to know Kaoruku ever since seeing her statues everywhere in the later games.

Inti Creates have been well aware of the Western demand for this series ever since Double Peace was first teased for possible localisation — so it’s great to see them giving us a proper chance to see things right from the very beginning. As for PQube? Well, I can’t think of a better partner for Inti, given the company’s delightfully shameless enthusiasm for a wide variety of Japanese titles that, ten or fifteen years ago, we would have probably never seen in English. 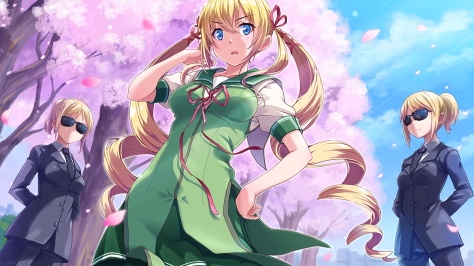 Gal*Gun Returns is coming in 2021 — no specific date, yet, sadly — for Nintendo Switch, Xbox One and PC via Steam. The Switch version will have both packaged and downloadable versions, while the Xbox and PC versions will be download-only. While you wait, be sure to check out my past Cover Game features on Gal*Gun Double Peace and Gal*Gun 2 — and get practicing your aim for those all-important Ecstasy Shots!