Earthworm Jim is, for many people, a defining game of the 16-bit home console era. Perhaps not in quite the same way as titles like Super Mario World and Sonic the Hedgehog, but it’s definitely a title people look back on fondly.

Probably the main reason for its enduring appeal is its incredible animation, which combines traditional hand-drawn techniques with digital pixel art to create something with a very distinctive and memorable aesthetic.

To my shame, I never played it back in the day. Thankfully, I can now correct that gap in my knowledge and experience thanks to the Mega Drive version being included on the Interplay Collection 1 cartridge for the Evercade retro gaming system. So let’s dive in and see what I’ve been missing!

Earthworm Jim initially came about as part of the craze for multimedia franchises that toy companies had been discovering throughout the 1980s and early ’90s. In particular, PlayMates Toys were inspired by the success of the Teenage Mutant Ninja Turtles franchise they had previously worked on and, seeing how well Sega’s Sonic the Hedgehog series had captured the popular imagination, decided to start their new series with a video game.

Around this time, PlayMates had been trying to hire one Dave Perry, a developer who had previously found some success with his work on licensed titles such as Cool Spot, Global Gladiators and Disney’s Aladdin for Virgin Games. Perry turned down PlayMates’ offer of employment, but instead managed to negotiate a deal where the company would fund and help set up an independent game development studio in exchange for the publishing rights to their first three games. The result was Shiny Entertainment.

Earthworm Jim himself came about as former Dreamworks animator Doug TenNapel presented a sketch of an earthworm character to Perry and his team at Shiny. Seeing potential in the character, Perry worked with TenNapel to flesh out the character’s personality and abilities, and the eventual result was the first Earthworm Jim game that hit Sega Mega Drive and Super NES in 1994.

The distinctively irreverent tone of Earthworm Jim’s humour came about at least partly as Perry’s own response to the corporate limitations he had previously had placed on him while working on the licensed titles at Virgin. With a completely original character, he and TenNapel were free to go as wild as they pleased with the character designs and overall feel of the franchise, and settled on creating a satirical parody of gaming conventions at the time.

Earthworm Jim’s quest to save “Princess What’s-Her-Name”, for example, poked fun at the common “save the princess” trope many games still relied on at this time in the games industry, while the game’s numerous antagonists and bizarre mix of level locales can be seen as a comment on the fact that, at this point in gaming history, coherent storytelling wasn’t much of a priority for many developers.

But what of the game itself? Well, what we have here is a 2D side-scrolling platformer designed somewhat in the “Euro” mould, in that there are generally multiple paths to your goal, and numerous secrets to uncover. It’s actually quite difficult to “get everything” in a level on a single run, since certain routes act as shortcuts and make it difficult or even impossible to go back on yourself to retrieve items you missed.

That said, this isn’t a huge problem for Earthworm Jim as a game in the grand scheme of things, since there’s no scoring system in place, and the only collectibles are additional ammunition and health bonuses, plus occasional super shots and extra lives. If anything, the latter should probably be made a priority if you’re not attempting to speedrun the game, since most levels are pretty challenging and unforgiving.

Part of the issue with Earthworm Jim from a modern perspective is that this “challenging” aspect isn’t always down to good level design. In fact, in quite a few cases it can be argued to be a result of over-design, particularly from an aesthetic perspective.

While the game’s beautiful animations don’t interfere with the gameplay to the same degree as in Jordan Mechner’s early titles Karateka and Prince of Persia (both of which are games that were also specifically praised for the quality of their animation on their original release), there are quite a few frustrating situations right from the outset of the game, where Jim can find himself locked in an amusing but unskippable damage animation that is unique to a particular enemy. After the fourth or fifth time you’ve seen one of these animations, it gets a little tiresome. Of course, ideally, one would “git gud” and avoid such things, but while you’re attempting to learn the levels if you’re a newcomer to the game as a whole, taking damage, at times, feels unavoidable.

A bigger issue in this regard is how the backgrounds are handled. Rather than making use of tile-based backgrounds as in titles such as the aforementioned Sonic the Hedgehog and Super Mario World, Earthworm Jim’s backgrounds carry a heavy “hand-drawn” look to them. This means that they look amazing and often do a great job of making a flat 2D stage have a sense of perspective about it, but so far as gameplay is concerned they aren’t anywhere near as clear and straightforward to navigate as tile-based maps. This becomes a particular problem in the second stage “What the Heck?”, where the scenery is covered with spiked parts, some of which will hurt Jim and others of which can be jumped through or passed by safely. 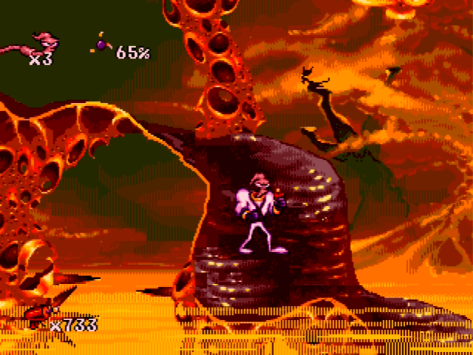 All this isn’t to say that Earthworm Jim is in any way unplayable from a modern perspective, I should probably add. As an example of a mid-’90s 16-bit platformer, it remains a solid example of not only gorgeous animation, but also silky smooth scrolling and enjoyably varied stage design. The game eschews the frequently used “world and substage” structure of many of its contemporaries, instead choosing to make each and every level completely unique, with its own visual aesthetic, selection of enemies and even, in many cases, gameplay mechanics.

As Jim proceeds through his quest he’ll not only explore platformer stages, but will also bungee jump, ride his “pocket rocket” through interplanetary warp tunnels, operate a submersible and escort a small pink dog through a series of increasingly unreasonable, perilous circumstances. One cannot say that Earthworm Jim does not keep things interesting and varied as you progress!

Earthworm Jim remains a game worth playing today, then — and regardless of gameplay is one of the most visually arresting games of the 16-bit era. Just be aware that it’s a quarter of a century old at this point, and that today’s game designers have been able to learn from the lessons it (often inadvertently) taught, embracing the positive aspects and avoiding the less desirable.

Go in with appropriate expectations — chief among which is the fact that this game will absolutely kick your arse inside-out the first couple of times you play it — and there’s fun to be had here, for sure. Just give yourself a bit of time to find it!