Mappy is perhaps not one of Namco’s most well-known arcade games from the early days — here in the West, anyway — but it’s still one that the company frequently acknowledges and pays tribute to.

Many of the cars in the Ridge Racer series feature “sponsorship” by the series, for example, and the first Mappy title, which we’re concerned with today, was successful enough to spawn several sequels. There was even an animated series made in 2013 as part of Namco’s ShiftyLook initiative, but sadly this is no longer officially available.

Whether you’re a longstanding fan of the series or a newcomer, you can now enjoy the original Mappy’s NES port as part of the Namco Museum Collection 1 for the Evercade retro gaming platform. So let’s take a closer look!

In Mappy, you take on the role of the titular mouse, who is working as a police officer. This is actually the source of the game’s name, through somewhat convoluted means; マッポ (mappo) is a term that stems from early 20th century thieves’ cant in Japan, and is used as both a derogatory term for both “police officer” and, rather peculiarly, “anus”, though the latter meaning is regarded as obsolete. Interestingly, まっぽう (mappou), which is an alternative form of the word despite technically being pronounced slightly differently, is also a term from Buddhism that refers to the “age of decadence” and the “last days of the world”. Isn’t language fun?

Anyway, to reiterate, in Mappy, you take on the role of the titular decadent anus, who is seemingly in charge of nicking all the stuff from a parade of 256 trampoline-equipped mansions before a gang of evil cats makes off with the loot instead. Except, this being a video game, they never actually really make off with the loot; they’re far more concerned with catching Mappy and prematurely ending his career as a rodent in blue.

The game unfolds as a platform game… kind of. Mappy can’t jump, climb or indeed do much other than move from side to side, so reaching different floors of the mansion requires the use of the aforementioned trampolines. While ascending from a bounce on a trampoline, Mappy is able to move sideways onto an adjacent platform; while descending, however, he simply has to wait for the inevitable. You can’t jump on a trampoline indefinitely, either; with each bounce, the trampoline changes colour from green to blue to white to red; landing on a red trampoline causes it to break, causing Mappy to fall. If this happens at the bottom of the screen, he falls into the bottomless Lovecraftian abyss that is apparently immediately beneath each mansion’s ground floor, never to be seen again.

In other words, much like a number of Namco’s other early games, Mappy is a game about understanding movement and positioning. The twist here is that there are very clear restrictions on how you can move and when, and understanding these limitations is absolutely critical to success, lest you find yourself caught in seemingly unavoidable pincer attacks! The enemy-free bonus rounds that occur every three stages are also a great way to test your skills, since they’re completely reliant on you understanding the trampoline mechanics specifically.

Mappy’s task in each stage is to collect all of the items. Each type of item is worth a different number of points, and there are two of each; collect two of the same item in a row and you’ll increase your multiplier for the second of the pair. Continue to collect pairs and you’ll maximise your score, and if you really want to wring the maximum number of points out of each stage, you’ll work in ascending value so that you collect the most valuable items with the biggest multiplier value. In this way, there’s actually a lot more depth and strategy to Mappy than might immediately be apparent — especially if you’re chasing high scores.

That said, you’d be forgiven for getting immediately put off the game by its immediate harshness. I struggle to think of an arcade game that kills the player quicker than Mappy if you don’t immediately do something the moment the game starts, and this can make the game seem rather daunting and inaccessible to newcomers. Once you figure out the game’s most important rules, though — most notably the fact that the evil cats won’t kill you if you’re bouncing or falling — things become much easier, and you can start to enjoy yourself. 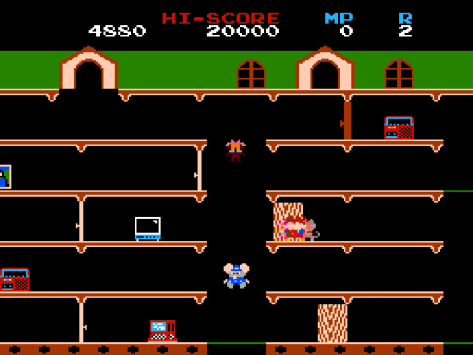 Mappy isn’t completely defenceless — though he never makes use of the truncheon he’s depicted as wielding. Instead, the cats can be dealt with by making use of the doors scattered around each mansion. The pale-coloured doors open outwards towards their doorknob, and inflict some fairly severe knockback on anyone on that side of the door — including Mappy, if he’s pulling the door to open it. The flashing red doors, meanwhile, are equipped with alarms. These send out a “microwave” in the direction of their doorknob when they are opened; this wave carries any cats standing in the way off the screen and awards Mappy with points according to how many of his foes he dispatches in this way at once. Later levels also provide bells in towers at the side of the screen, which can be dropped on cats beneath Mappy.

One of the cats, known as Goro, is considered to be the “boss” of the criminals, and is markedly less aggressive than his minions. Instead, he spends a lot of time hiding behind the various items in the mansion. If Mappy happens to retrieve an item that Goro is hiding behind, he’ll score an extra thousand points and be able to walk past his nemesis unharmed for a moment; if Mappy is fortunate enough to catch Goro in one of the “microwave” blasts from the alarmed doors, he adds a multiplier to the value of any cats carried off the screen.

If all that sounds a bit complicated, you’d be absolutely right, and this may account for the reason why Mappy isn’t nearly as well-known as some of Namco’s earlier classics such as Pac-Man. While those earlier games could be easily picked up and understood by anyone, Mappy has a definite learning curve, and requires practice — initially simply to survive more than a stage or two, and subsequently even more to maximise one’s scoring potential.

This isn’t to say Mappy is a bad game by any means, mind you; just be sure, if you’re a newcomer, that you’re going in with appropriate expectations. You will be bad at Mappy the first few times you play, and it may well be tempting to give up and cast it aside. But take a bit of time to learn its quirks and idiosyncrasies and there’s a highly rewarding, satisfying and addictive arcade game to enjoy here — and with 256 levels in total, it’s one that can potentially keep you busy for a very long time indeed!

5 thoughts on “Mappy: Your Move, Cat”