His Fairune series provides a fascinating twist on the item-based action RPG formula, emphasising puzzles of traversal rather than all-action combat.

And, as it turns out, his game Kamiko does precisely the opposite… while still maintaining that distinctive Skipmore magic. Let’s take a closer look.

In Kamiko, you take on the role of one of three different shrine maidens, each of whom is tasked with saving the “transient world” from invasion by demons. In order to accomplish this, each maiden is issued with an item from the Imperial Regalia — the three symbolic sacred treasures of Japan — which enables them to become a powerful “Kamiko” warrior, clean up the whole demonic mess that is going on and generally make the world a better place.

Regardless of which of the three playable heroines you pick, the basic structure of the game is the same. There are four levels, in each of which you must find and unseal four gates, at which point a teleporter to the boss opens. Defeat the boss and proceed to the next level. Pretty straightforward. 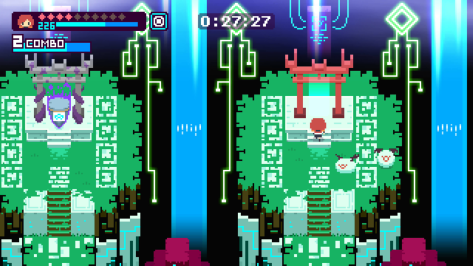 Naturally, those gates aren’t in particularly convenient locations, so you’ll have to explore the levels and complete some challenges to access them. While Fairune emphasises challenges of the mind, in Kamiko they are more challenges of both memory and skill, generally consisting of receiving an object from a treasure chest, then having to remember where you’re supposed to take it to and get it there without taking any damage along the way, since you can’t attack while you’re carrying something.

There are some interesting strategic things you can do, though. The game maps are split into invisible “rooms”, and enemies spawn in those rooms when you enter. Defeat all the enemies, and the next time you come back, they’ll all respawn. Defeat all but a few, however, and there’ll just be the few you left next time you come back; as such, it pays to prepare the route through which you’ll need to carry something ahead of time, particularly in the later levels when you deal with speedy enemies that home in on your position, or those that fire projectiles. Take out the most troublesome enemies and leave a couple of weaklings, and carrying your precious cargo to its destination suddenly becomes much easier!

Combat is a significant part of Kamiko. By fighting enemies, you receive blue gems, which convert into the “SP” resource. This can either be used 50 points at a time to unleash a powerful charge attack, unique to each heroine, or used in varying quantities to unlock chests, open doors and unseal the gates. As such, you’ll need to constantly wail on enemies to keep your SP charged up, and the longer the combo of enemies you defeat without stopping or taking damage, the more SP you’ll receive for each kill.

The three Kamiko distinguish themselves in the way they fight — and while they all proceed through the same levels, they handle very differently from one another. 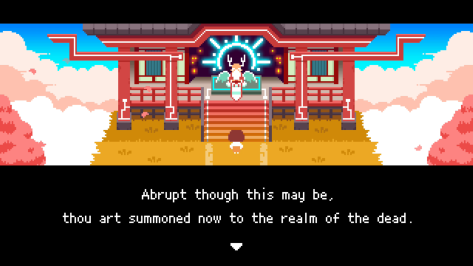 Yamato wields the large sword Kusanagi. She is capable of unleashing both a powerful combo with a wide arc and, by charging her SP attack, turning into a whirling, invincible death machine, much like her Fairune Blast incarnation. She is probably the easiest character to get started with, as she plays the most conventionally like a top-down hack-and-slash character — though her melee nature means she’s in the thick of the action at all times, and consequently often in a lot of danger.

Uzume, meanwhile, wields the Magatama of Yasakani, which she uses as arrowheads for her bow. As such, she is a ranged attacker; her “combo” consists of her firing a single shot ahead, then a narrow spread of arrows, then a wide spread of arrows. Again, her Fairune Blast “bomb” attack is mirrored in her SP attack here; charging up allows her to fire a very wide spread of arrows, which subsequently home in on nearby targets. 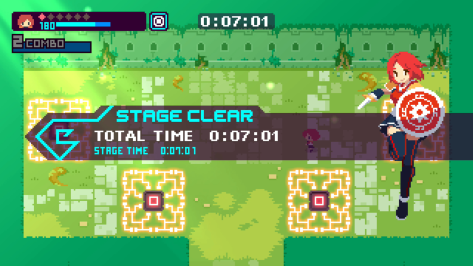 Finally, Hinome — who we’re never explicitly told is the nameless heroine from Fairune, but there’s fairly compelling evidence to suggest she might be — wields the mirror Yata no Kagami, which she uses as a shield. Her combo is a little unusual; with the first hit, she throws the mirror like a boomerang, and until it returns to her, she is capable of performing short thrusts with a dagger to deal with nearby enemies. The dagger thrusts are much less powerful than a direct hit from the mirror, but it means she can cut a path through close-up enemies when necessary. Her SP attack sees her sending the mirror out in gradually expanding circles around her, eventually hitting pretty much everything visible on screen.

Kamiko doesn’t have traditional RPG trappings like Fairune does. Instead, each level contains secret items that allow you to increase your maximum health and SP, and you earn an increase to both prior to facing the boss of each level, too — though if you want to impose a challenge on yourself you can choose not to take these if you prefer!

With this in mind, though, there’s no real benefit to defeating enemies besides earning the SP required to accomplish the various tasks around the level. What you’ll probably find, though, is that on your first few playthroughs at least, the combat is so satisfying that you actively seek out enemies to defeat simply because it’s so much fun.

A lot of this satisfying feeling comes from Kamiko’s very smooth handling, which is a stark (and clearly deliberate) contrast to Fairune’s strict grid-based four-directional movement. Here we have super-smooth analogue movement in all directions; the characters feel somewhat like they “glide” around the levels and attacking feels natural and graceful; dancing around enemies is a consistent and delightful pleasure throughout. 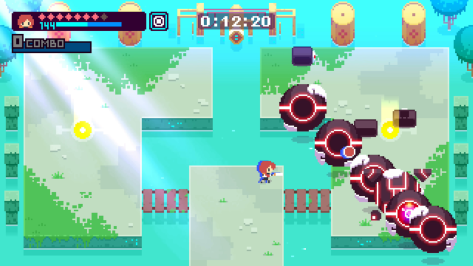 This goes for the bosses, too; while, again, the four bosses you encounter over the course of the game are the same each time you play, the way you’ll have to beat them with each character is markedly different due to the way their attacks work, with each of the heroines’ weapons necessitating different “steps” for you to be in a good position to do damage. None of the bosses are straightforward “tank and spank” affairs; each of them have their own unique mechanics that you’ll have to learn, understand and master performing in order to defeat them effectively and efficiently.

Oh yes, efficiently; much as Fairune and its sequel encourage repeat playthroughs with a mind to completing them as quickly as possible, so too does Kamiko encourage speedrunning. Upon completing each level, you’re shown how long you took and your total time so far, and, of course, upon clearing the game you’re given your total time to beat the whole thing. Your top five times for each character are recorded, too, so you can track your progress towards true mastery of the game over time — and you can even choose to display a real-time clock as you play so you can keep tabs on how you’re doing on this particular run as you play.

Rather wisely, given this emphasis on speedrunning, Skipmore elected to make Kamiko even shorter than Fairune. Your first playthrough will likely take less than an hour — I took about 45 minutes — and this can be cut down considerably once you understand how the game works and spend less time wandering aimlessly around figuring out how to open doors. And once you remember that as enjoyable as splattering hordes of enemies is, you absolutely do not need to kill any more foes than necessary!

While four levels that take 30-45 minutes in total to complete might not sound much, it makes replaying Kamiko a much more appealing prospect if you, say, only have half an hour to spare before you need to do something else.

It also means the game never feels like it’s outstaying its welcome or becoming tiresome. And the attractive, colourful pixel art graphics coupled with the wonderfully infectious chiptune soundtrack by Taira Watanabe (better known as “Misoka”, probably best known prior to Kamiko for their contributions to the 1001 Spikes soundtrack) give the whole game a very pleasing, addictive energy to it.

It’s a joy to return to Kamiko time and time again, even after you think you know all its secrets. And, despite having beaten it with all the heroines now, I can see myself coming back for more for quite some time yet!

3 thoughts on “Kamiko: Fighting for the Transient World”