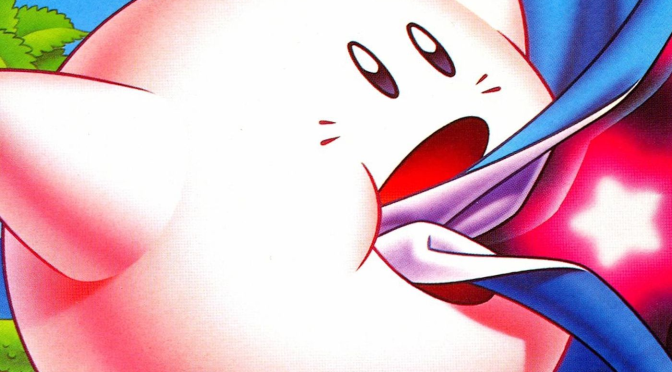 I’ve not been going through the Kirby series chronologically because I thought it might be interesting to dip in and out of it in various places to see how it’s changed over time.

Having already taken a look at one of his later games and a beloved title from the 16-bit era, I thought it high time we took a look at one of his earliest adventures: Kirby’s Adventure for NES, the second game in the series — and, conveniently, a title that has been available on the Nintendo Switch Online NES app for a while now. 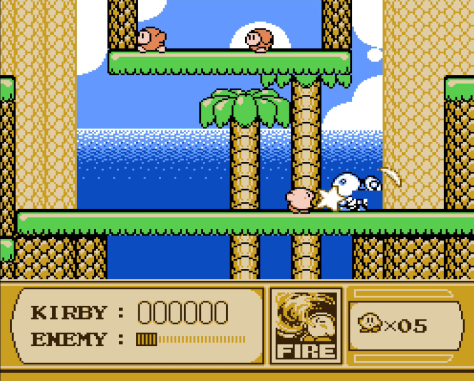 Kirby’s Adventure is a side-scrolling platform game from 1993 that tasks the titular character with recovering the scattered pieces of the Star Rod in order to return the dreams to Dream Land. Because without them it’s just Land, presumably, and that would put it at danger from passing Magic: The Gathering players or something.

As a very late release in the NES’ lifespan — the Super NES had come out two years earlier in North America — the game passed a fair few people by at the time of its original release, but in retrospect it has come to be regarded as one of the best games in the original NES’ library. The Kirby series in general would go on to be one of Nintendo’s most prolific franchises — albeit one that doesn’t tend to get talked about nearly as much as that one with the chubby plumber.

Kirby’s Adventure was originally intended to be a simple NES port of the pink puffball’s first game: Kirby’s Dream Land for Game Boy. Project director and game designer Masahiro Sakurai (yes, the same guy people yell at when they don’t get the Super Smash Bros. characters they want) was dissatisfied with this is a concept, however, and decided to develop a new game. 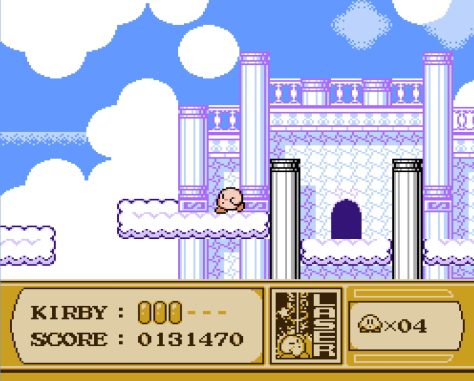 Sakurai’s reasoning for this was that the original game had been designed for gaming newcomers and as such had received criticism from veteran players for being too easy; he noted that the audience for the NES, which had been on the market for nearly eight years (ten in Japan) by the time Kirby’s Adventure came to be, were perfectly willing to take on a challenge, and as such he decided to completely rebuild the game from the ground up to cater to these more experienced gamers.

The original Kirby’s Dream Land had allowed Kirby to suck up enemies in order to defeat them, but Kirby’s Adventure is the game that introduced the iconic “Copy” ability he is inextricably associated with today.

Sakurai and his team came up with a wide variety of different moves they would like to see Kirby be able to perform in the game, then picked a selection to include in the final product. This resulted in the pink puffball having 25 different abilities he could add to his arsenal based on the enemies he sucked up — plus a selection of basic abilities that could be accessed at all times.

Why add so many moves, though? Even back in the early ’90s, Nintendo games were known for being family-friendly and having easy to understand but tough to master mechanics, so wouldn’t having that many different moves available deter less experienced players? Perhaps, but the main intention behind this was not to make the game overly complex; rather, it was to improve its replay value, and to encourage players to experiment. Kirby’s Adventure is not the sort of game where you tend to need a specific ability in order to progress — but if you do happen to have the right one at the right time, you might be able to track down some secrets or find some alternative routes.

In a pleasantly newbie-friendly touch, pausing the game with the Start button does not simply freeze the screen, but rather switches to a separate display that explains exactly what Kirby’s current ability is. This is even true for his normal arsenal; the pause screen for Kirby in his normal form explains how to inhale enemies and copy their abilities.

And those abilities are varied and interesting; they’re not just all variations on attacking enemies. Some, like the sword and the beam, are effectively melee weapons; others have varying amounts of range on them. Fire covers a reasonable distance in front of you like a flame-thrower, for example, while the laser shoots across the screen and can be bounced off certain surfaces.

Where things get more interesting is with the abilities that are more defensive in nature, or that can be used in multiple ways. The Parasol, for example, can be used to float gracefully down instead of falling, but can also be used to hit enemies over the head. The Spark, meanwhile, allows Kirby to shock anything that gets near to him — including breaking blocks that are directly above or below him that cannot be hit with other weapons.

The game encourages experimentation as you progress through the game. Kirby drops his current ability any time he gets hit by an enemy, though it can be retrieved if you’re quick enough. “Museums” put in regular appearances throughout the game’s overworld maps, allowing you an easy opportunity to obtain a specific ability before you start a new stage. And certain encounters open with a choice of enemies to suck up and copy before you’re thrown into the fray against a powerful foe.

The structure of Kirby’s Adventure is kept constantly unpredictable and surprising, much like a dream often seems to defy rational logic. Sometimes you’ll run into a boss in the middle of a stage, for example, and on another occasion you’re presented with what appears to be a boss’ health bar, only to discover it actually represents the overall strength of an incoming horde of enemies, requiring you to both protect yourself and go on the offensive as much as possible. 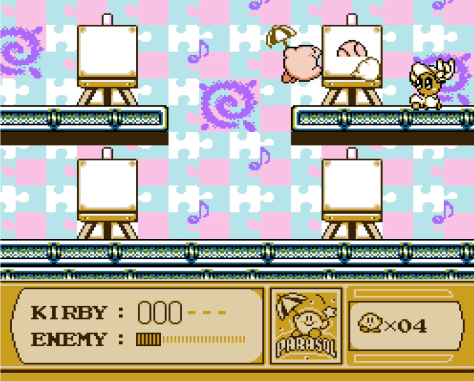 At the time of writing, I’m just into the game’s second “Level” — each Level is made up of several stages connected by a side-on overworld map that gradually reveals itself with each cleared stage — and I’m having a wonderful time so far. Whether or not this is a “conventional” Kirby game remains to be seen — but regardless of the answer to that, it’s definitely a thoroughly charming, fun time that remains highly enjoyable to this day.

One thought on “Delving into Kirby’s Adventure – #1”