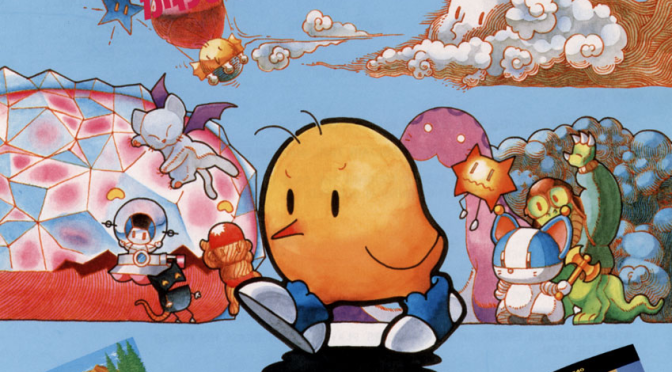 New Zealand, as beautiful a country as it is, is not a place that gets a lot of attention. I mean, it’s tucked away down there right in the corner of the map where everyone forgets about it.

However, back in 1988, the country left a sufficiently lasting impression on one of Taito’s programmers that, upon his return from holiday, he wanted to make it a setting for a new arcade game.

The result was The New Zealand Story. And it’s one of Taito’s most interesting games. 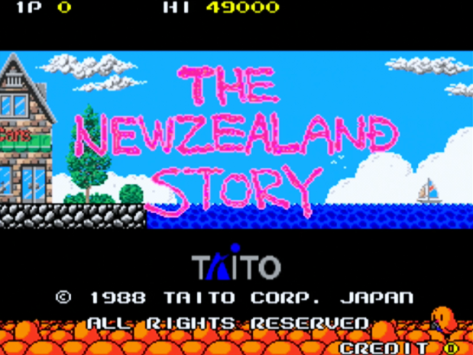 In The New Zealand Story, you take on the role of Tiki, a kiwi (the bird, not the fruit) who is out to rescue his kidnapped friends. They’ve all been kidnapped by an evil leopard seal, you see, so it’s up to Tiki to save them all before, if certain mechanics of the game are to be taken literally, he is dragged into hell, never to see the sunshine of New Zealand ever again.

Although superficially resembling some of Taito’s earlier games such as Bubble Bobble, The New Zealand Story eschews the single-screen “kill ’em all” approach in favour of larger, scrolling levels that Tiki must explore. Tiki is able to jump — but not fly, since Kiwis are flightless birds — and fire a limitless supply of arrows from the bow he is carrying around with him, but the aim is not to defeat all the enemies. Rather, it’s simply to make it to the exit of the level, where one of his kidnapped friends is waiting to be released.

Since it was more exploration-based than many of Taito’s previous platformers, The New Zealand Story incorporated an interesting feature that we take for granted in our games today: a minimap. This was very simplistic, consisting only of a rectangle that represented the level’s complete area rather than showing the details of platforms and obstacles, but it did update to show Tiki’s position in real time, as well as the location of the exit point.

Along the way, Tiki has to deal with all manner of hazards, including enemies, spikes and water. The game was particularly noteworthy for being an early example of a platform game that featured multiple ways of getting around — as well as running and jumping on the ground, Tiki could also swim through the water and hijack enemy flying machines to take to the skies, and it was often essential to do all of these things to reach the exit.

This sort of thing was still pretty new to the platform game genre at the time — Super Mario Bros. 3, which popularised many of these twists on the concept of “mobility” through its iconic power-ups, came out a month after The New Zealand Story hit arcades — and so Taito’s game was, quite rightly, seen as something new and exciting.

It was especially well-received upon its conversion to home computers in 1989. The various ports for 8- and 16-bit microcomputers were published in Europe by Ocean Software — a prominent British game company at the time — and was particularly well-regarded in its ZX Spectrum incarnation — though British publication Amiga Power also declared the 16-bit port the “19th best game of all time” in its pilot issue, bundled with Amiga Format in May 1991. 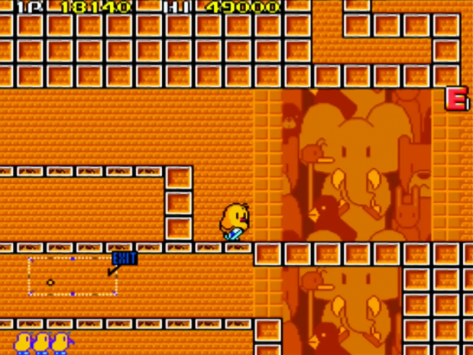 One reason for its noteworthy popularity in Europe — and especially among Amiga owners — was its inclusion in Commodore’s popular “Batman Pack” bundle for the Amiga 500 computer. This went on sale in September of 1989 and sold a mighty 2 million units, each of which contained, among other things, a copy of The New Zealand Story.

The New Zealand Story actually holds up very well today. Its platforming controls might initially feel a bit stiff to those more accustomed to modern games that have a bit more momentum about them, but they are responsive and tight, and you always feel like you’re in complete control of Tiki. The jumping controls are particularly good; the amount of time you press the button differentiates between a short hop and a larger leap, and the distinction feels clear and natural. It’s rare you’ll find yourself accidentally bashing Tiki’s head on a spiked ceiling or plummeting to your doom because you didn’t jump high enough.

The level designs are consistently interesting, too. Although much smaller than your typical, say, Super Mario level, they make up for this in the fact that they’re not simple left-to-right affairs. In fact, most levels send you on a rather meandering, winding path throughout their scenery, in some cases feeling like an elaborate puzzle as much as a test of dexterity. Throw in the swimming and flying mechanics and you have a extremely varied set of levels to work your way through.

An interesting twist on the usual conventions of the arcade platformer is that many enemies don’t immediately kill Tiki if you just run into them, unlike in, say, Bubble Bobble. Rather, unless the enemy is obviously “dangerous” (i.e. covered in spikes, usually), Tiki will only lose a life if he is hit with a projectile. This allows you to enjoy exploring the levels a lot more; it still pays to be cautious, but you’re not constantly living life on a knife-edge.

The boss encounters are imaginative and cool; rather than acting as simple bullet sponges, the bosses all have intriguing mechanics you have to deal with. The first, for example, is a whale encased in ice; his icy shield makes it impossible to damage him with your arrows, so in order to defeat him you have to actually allow him to eat you, at which point you can fill him with pointy things from the inside.

And there always feels like there’s something new to discover, too; aside from point-yielding items, enemies sometimes drop new weapons or power-ups, and many of these behave in radically different ways to Tiki’s default bow and arrow. The laser gun, for example, fires horizontally at extreme speed, while the bombs travel in a slight arc out from you before exploding and taking out anything in their blast radius. Learning when is a good time to grab a power-up and when to leave it behind is an essential skill to learn if you hope to ever one-credit clear The New Zealand Story.

Like many of Taito’s older properties, The New Zealand Story isn’t that readily available on modern systems. It is, however, part of the first Taito Legends pack for PlayStation 2, Xbox and PC — the two volumes of this are an essential part of any retro enthusiast’s collection — and got a substantial reimagining for Nintendo DS in 2007. The PC Engine version was also available via the Wii’s Virtual Console service in Japan, but unfortunately at the time of writing, that’s no longer an option due to Nintendo’s closure of the platform’s digital services.

Still, it’s worth finding a way to play The New Zealand Story as it’s a fun platformer with some interesting twists on the usual formula. And, of course, it gives our Kiwi cousins some much needed appreciation for something other than Lord of the bloody Rings.

More about The New Zealand Story