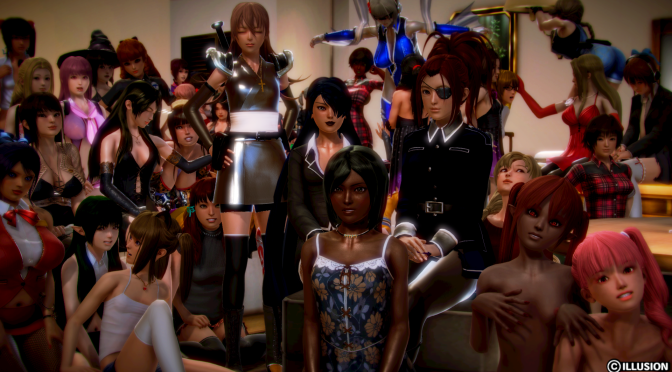 Good grief, it’s getting crowded in there… wherever I decide to take them.

It’s actually got to such a stage now that it’s seemingly impossible to get everyone in shot, so you’ll just have to take my word for it that there are now 47 Honeys in place. And they’re getting a bit rambunctious.

Hit the jump to see the latest additions to the harem…

For those of you just catching up, the Hundred Honeys Project is an attempt to make as many characters using Honey Select Unlimited as possible, then cram as many of them as possible into an environment without my computer exploding. 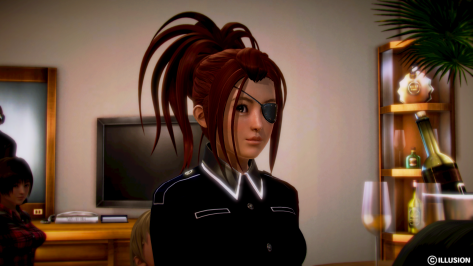 For today’s efforts, I thought I’d dip my toe into the mod scene for Honey Select Unlimited. I decided to steer clear of anything too complex to install and instead simply plumped for a few additions to the hairstyle and clothing libraries. Specifically, I added the Coiffure Pack and the Play Club Clothes mod, the latter of which adds clothing options from one of Illusion’s previous titles.

The first of today’s new girls makes use of both of these mods. This is Rihoko Inami, and she’s sporting a hairstyle I find rather attractive and a recoloured military-style uniform. She’s pretty hot. 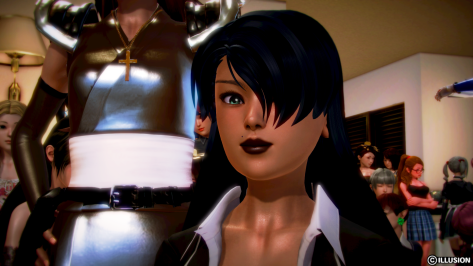 I was going for a vaguely “Goth” concept with Hime Kawaue here. I started with the emo-style combover at the front, and expanded from there. I was delighted to discover that the Coiffure Pack contains extremely long hair, so although you can’t see it here, it’s most certainly there. 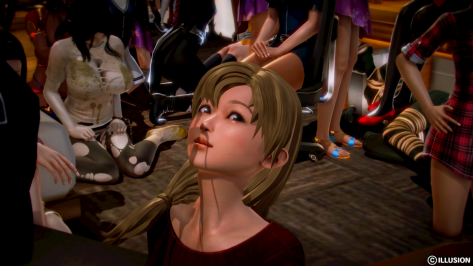 Next up we have Eva Harper, who I’ve only just noticed looks like she has a nasty nosebleed owing to the shadows being cast on her. I had a rough “nice housewife” concept in mind for her, so she’s dressed fairly conservatively, and again makes use of one of the new hairstyles — in this case, an attractive ponytail brought forward over the right shoulder. 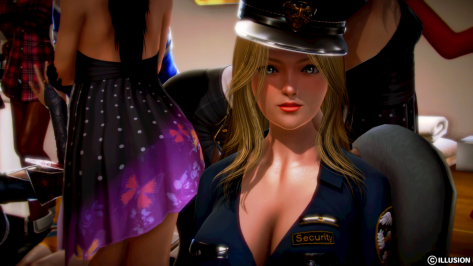 Sergeant Sample is just a built-in default sample character for Honey Select Unlimited, but I found her so immediately striking I wanted to add her to the group as soon as possible. I’m sure you understand. 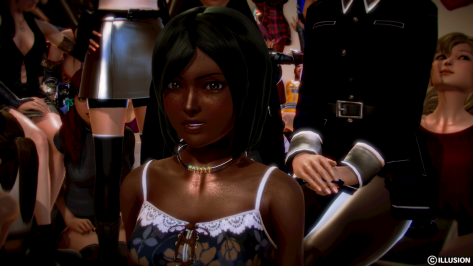 Hitagi was an attempt to add someone with dark skin to the mix. When creating a dark-skinned character in Honey Select Unlimited, you have to be careful to remember to also darken parts of the body such as nipples and freckles, otherwise they might look a bit odd. I forgot to do the freckles on Hitagi here, so she has a few oddly bright blotches around her nose! 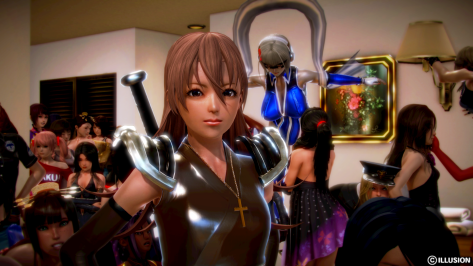 And finally we have Mina, who sports another of the new hairstyles. As soon as I put it on her and saw it with that default colour, I was reminded slightly of Lightning from Final Fantasy XIII, so I expanded on the concept to create something of a “JRPG heroine”. Granted, she carries a baseball bat rather than a big shiny sword, but that’s the best I can do for now without some props mods! I’m pretty pleased with how she came out though. 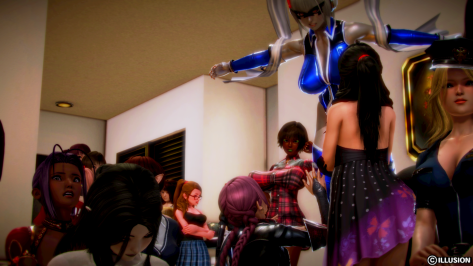 I’m addicted to representing the robotic A2 as an irresponsible drunkard who is always doing something stupid. Today is no exception to that rule. 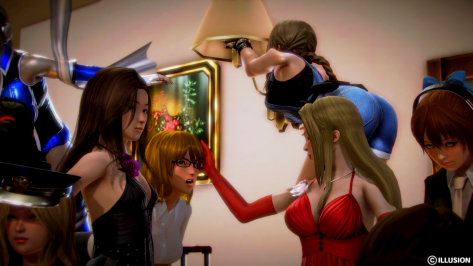 A bit of a one-sided argument goes on while the ever-resourceful Emily changes a lightbulb. 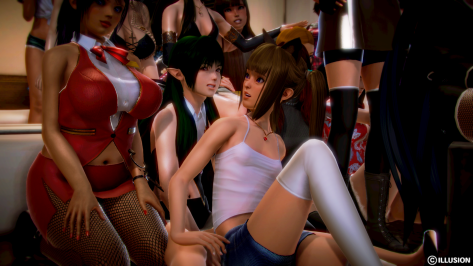 I totally ship these two. They just look too cute together. 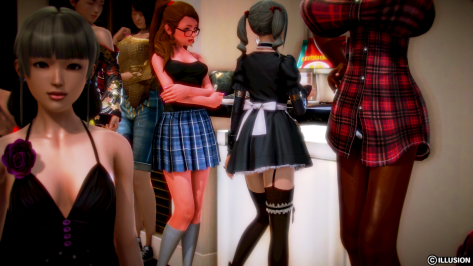 Hanging out by the complimentary tea and coffee making facilities, which are ill-equipped to deal with this many people at once. 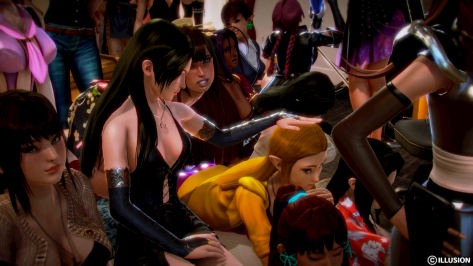 And here’s Rinoa being exceedingly patronising to Princess Zelda. Zelda doesn’t seem to mind too much, though she does have perpetual grumpface.

Honey Unlimited Studio is still just about coping with the strain of rendering so many characters at once, though the frame rate is now pretty low and my graphics card makes loud blowy noises while I’m doing… well, anything really. But it’s hanging in there!

The challenge now, to be honest, is simply physically fitting all the characters into a single room, ideally allowing for a shot that allows all of them to be visible. I didn’t quite manage that today, but the next time we revisit the Hundred Honeys Project I’ll see if there’s some sort of more expansive environment I can put them in… maybe I need to look further into this whole modding business!

Well then. That’s that for another week! We’ll revisit the project again very soon…