One aspect of gaming we’ve lost sight of a bit over the course of the last couple of console generations is the idea of a game that is “nothing but fun”.

This kind of game hasn’t died out completely, of course, but at the time of writing they remain primarily confined to the independently developed, digital-only sector. Capcom’s Under the Skin for PS2, meanwhile, reminds us of a time not so long ago (2004) when this type of experience would get a full retail release and no-one would bat an eyelid. 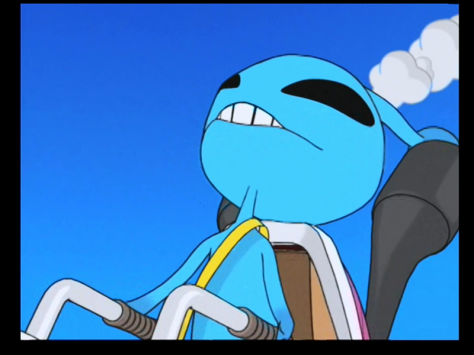 In Under the Skin (also known as Annoying Alien: Panic Maker in Japan) you take on the role of Cosmi, a young alien from Planet Mischief, who is tasked with overcoming his people’s coming of age ceremony. Tradition dictates that, upon reaching three years of age, an inhabitant of Planet Mischief must prove their worth by travelling to a planet and causing widespread panic by playing pranks on its inhabitants.

Keen to impress his overbearing father, Cosmi travels to Earth, widely regarded among his people as one of the greatest challenges there is, but unfortunately he crash-lands having collided with an orbital broadcast satellite, setting himself at an immediate disadvantage. Fortunately, he is rescued by the local Mischief Master, Master Itazura, who trains him in the ways of mischief before setting him on his way to accomplish his goal. Thus begins a journey through eight stages in which your sole aim is to cause as much chaos as possible. 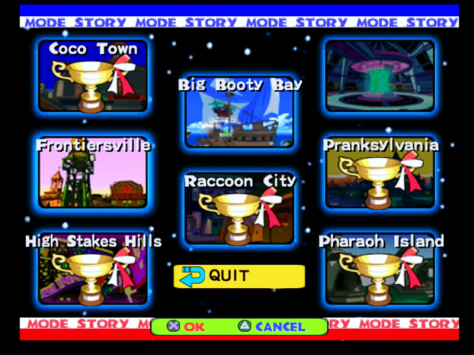 At heart, Under the Skin is a competitive points-based game. The basic mechanic involves using various items to “prank” humans wandering around each of the stages, which causes them to drop coins. The exact objective varies according to the stage, but generally speaking you have a ten-minute time limit in which to either obtain more coins than your opponent, collect a target number of coins in collaboration with a comrade, or reduce an opponent’s number of coins to zero. There’s also a split-screen versus mode that provides an ideal opportunity for communal mischief.

In order to acquire these items used for pranking, Cosmi must “possess” humans by capturing them with his beam gun, then use the small UFOs that appear around each stage to transform himself. Once this is done, he has access to anything that human was carrying, but successful pranks cause his targets to become angry and start chasing him.

In human form, Cosmi can take two hits — in a nice homage to Capcom’s 1985 Ghosts and Goblins, the first hit causes the human’s clothes to fall off and for them to start running around in their underwear — but either losing his disguise on the second hit or taking damage in alien form causes him to drop coins. These coins can’t be recovered, either — though your opponent does have a few seconds to steal them! Losing all of your coins causes you to fail the current stage, so as well as your score they also act as a kind of life meter.

The prank items are many and varied, with more unlocking as you progress through the different stages. Some are pretty straightforward “direct damage” — a boxing glove allows you to perform a melee-range attack, for example, while rocket launchers, guns and even tanks allow you to unleash mayhem from range — while others have effects that are less easy to predict. A fireworks display fascinates the people around it, for example, but there’s no guarantee it will then explode in their faces afterwards. Summoning a herd of elephants is as dangerous for you as it is for everyone else. And it’s surprisingly hard to aim giant hamburgers falling from the sky.

Each stage also has a unique “Panic Time” mechanic that triggers every so often. Sometimes these are designed to make life more difficult for you, such as the sandstorm in the Western-themed stage that not only makes it difficult to see, it prevents you from seeing the location of UFOs on the minimap. Others, meanwhile, provide the opportunity to score additional points, such as on the “Pharaoh Island” level, where smashing the huge golden balls that appear during Panic Time is a great way to get a huge amount of coins in a short space of time.

Under the Skin is not a game that takes itself the slightest bit seriously, as you’ve probably surmised. The whole experience is presented in a somewhat angular, stylised, cel-shaded aesthetic that still looks good today thanks to its excellent animations and character models that are full of personality, and the visuals are complemented by an catchy, varied musical soundtrack and some legitimately excellent English voice acting. Richard Newman’s cartoonishly overblown racial stereotyping of Master Itazura is a particular highlight, somewhat reminiscent of Burt Kwouk’s memorable voiceovers for EyeToy: Play and chaotic TV show Banzai — not to mention the sort of thing a developer probably wouldn’t get away with today — but the vocal performances on the whole give a wonderful “cartoon” feeling to proceedings. 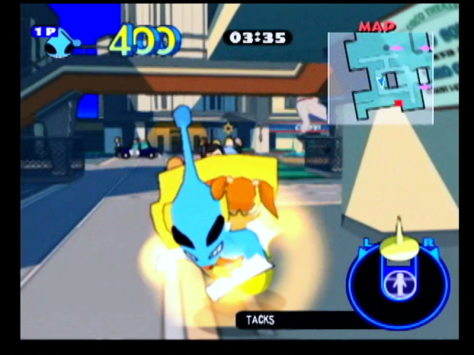 There are plenty of homages to other Capcom games throughout, too. Besides the aforementioned “one hit strips you down to your underwear” mechanic, the most obvious one is the fact an entire level is set in Resident Evil 3-era Raccoon City — complete with Nemesis. Not only are you tasked with defeating the seemingly unstoppable bioweapon in this level, but you also have the opportunity to take control of several characters from Resident Evil 3, too — and these named individuals inevitably have a much better lineup of items than the generic zombies wandering the streets.

There are only eight levels in the game, but much like many other old Capcom titles (including the earlier Resident Evils), it’s designed to be replayed numerous times. Clearing all eight stages gives you a breakdown of how long you took, how many coins you collected, how many times you failed a stage and how many times you saved your game. This translates to a final score and a letter grade, and your best three are recorded for posterity so you can challenge yourself to do better next time. You can clear the whole thing in an hour or so if you know what you’re doing (and don’t mess up), so going for a full playthrough isn’t a significant time investment — though it is a little longer than your average arcade-style game.

Whether you’re chasing high scores or just playing around with the enjoyable pranking mechanics, Under the Skin remains a highly entertaining, extremely silly game that is a great palate-cleanser from today’s lengthier epics.

In many ways it feels like a callback to even earlier titles from the 8- and 16-bit eras of computer and console games, and that’s no bad thing; not everything has to be a sprawling, 50+ hour monstrosity to be fun. Sometimes you just want to release some dogs into a crowd of people, only to watch them blindly careen into the hula-hoop and thumbtack traps you’ve set for them. And Under the Skin is happy to provide that experience for you.

More about Under the Skin