This is a bit of a shame, really, since although the most immediately obvious appeal factor of them is the fact that they are interactive pornography (and many of the most modern ones have virtual reality headset support), for many, the most enjoyable aspect of these games is a creative one: the fact you can use a detailed set of tools to design a character of your choosing.

Over the years, Illusion has attracted its fair share of controversy from the Western games press, primarily for the fact it has released a number of games featuring graphic depictions of rape. The most notorious of these are 2002’s Battle Raper, a fighting game in which the consequences for losing are probably fairly self-evident (though interestingly, its sequel Battle Raper II: The Game, does not feature rape scenes), and 2006’s RapeLay, a sexually explicit narrative-based game in which the player-protagonist is a rapist attempting to get revenge on a widowed mother and her two daughters after they get him arrested for groping a woman on the subway.

The latter of these two caused considerable controversy some three years after its release when British politician Keith Vaz became aware of the game and that it was apparently available for sale in the West via online retailer Amazon, expressly against the wishes of Illusion who, up until this point, had only sold and supported its games in its native Japan. Such was the worldwide uproar over the game that the Ethics Organisation of Computer Software in Japan imposed restrictions on its production and sale, effectively making it impossible to purchase from that point onwards. Illusion subsequently removed the game from its website on the grounds of its “impact on the industry”.

The issues surrounding RapeLay didn’t deter Illusion from continuing to produce sexually explicit games, however, although the company did have something of a quiet 2009 in terms of releases while the dust settled from the worldwide outrage.

Honey Select is one of Illusion’s more recent and most well-received titles. Originally released in Japan in 2016, it subsequently became popular both in its native territory and among Western fans and fan-translators online. After spending a few minutes with Fakku’s demo version (which you can acquire either by pre-ordering the game or signing up for a Fakku account), it’s not hard to see why; the character creator is one of Illusion’s best, featuring comprehensive but accessible controls for designing, dressing and establishing the personality of your dream waifu(s).

The editor is divided into several tabs: the “Body” tab allows you to design the physique of your character’s face and body, including aspects such as their hairstyle and makeup, while the “Clothing” tab lets you define several outfits for them for different circumstances such as hanging out in their room or going swimming. The “Other” tab, meanwhile, allows you to define their personality (which affects their voice and the lines they speak to you), the pitch of their voice and various personality traits that will affect both their daily life and how they react in the sex scenes in the full game.

Flexible (if initially unintuitive) camera controls make it easy to focus on a particular area of your character that you’d like to work on, and a toolbox in the corner allows you to cycle their eyes and mouth through several default expressions, and for them to put their body in one of a number of different poses. You can also choose to undress them if you want to see the impact your changes are having on their physique more easily, or change the background to see how they’d look in different contexts.

The array of options on offer initially appears somewhat bewildering, but the best thing to do is simply to jump in and see what happens when you change things; most controls have a “default” button allowing you to reset them to their standard values, and you can easily save your work as you go along if you’re worried about destroying that perfect “look” with a bit of fiddling around.

There aren’t a lot of limitations on what you can do, within reason. Obviously you can’t go adding anything like extra limbs or such like (and those into futanari will be disappointed) but if you want to, say, make a robot or alien girl with a non-standard skin colour or just a girl with crazy anime-coloured hair, it’s simply a case of using the palette in the lower-right corner of the screen and finding that perfect hue using either a standard Windows-style colour picker, slider controls or a selection of default colours. You can even save your own set of custom colours for easy later recall if you find a tint you particularly like.

You can also create physically-improbable physiques to your heart’s content. Want to make a loli with massive thighs and a tiny head? Go right ahead. Got a thing for artificial tits? Turn down the “Breast softness” slider. Inflation fetish? Fiddle around with the waist and hip sliders and you’ll almost certainly be able to deform your creation into something you find aesthetically pleasing. 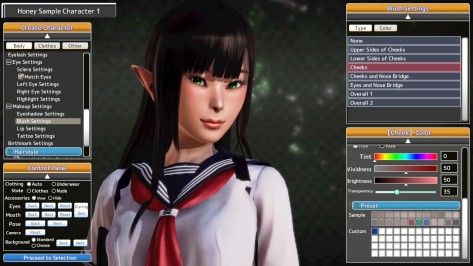 There’s even the facility to do things like adjust the shape of ears and eyes to create elf-like characters, though anything more monstrous will doubtless be left to the modding community if they haven’t already achieved it with the original Japanese version. And most things that can be recoloured can also have their “shininess” adjusted in various ways, with the colour, intensity and texture of the “shine” fully customisable, allowing for effects like reflective clothing or simply a “wet look”.

There are a few things it might be nice to have a bit more control over — most notably things like the positioning of large accessories such as bags to prevent them clipping through arms and hair and suchlike — but even in this limited demo version, which only comes with a fraction of the possibilities the full game (and modding community) will offer, there’s a huge amount of flexibility on offer, and a really pleasing sense that you’ve done something genuinely creative when you’ve put a full character together.

When you’re done with creating your character, you take a photograph of them for their “card”. What’s interesting about this is that the card, saved as an apparently simple .png image file, actually contains all the additional information about the character that you’ve defined — things like their name, personality, traits and suchlike — as well as their physical appearance. This is a really interesting way of handling portable save files, and was last seen, of all places, in Maxis’ Spore.

Indeed, this aspect of the game is one of the reasons Honey Select has been so consistently popular since its original release; sharing custom creations with the community is a simple matter of uploading your cards somewhere for other people to download and drop into their game folder; there’s even a booru imageboard specifically for sharing these cards, and the original Japanese release featured the in-game facility to upload and download cards, too. 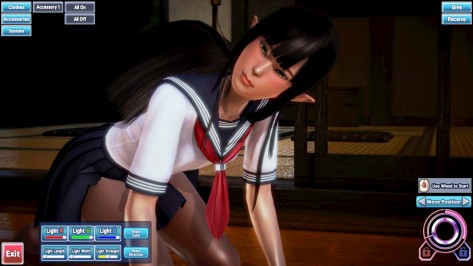 The “sex sim” part of the game itself is relatively straightforward: use the mouse wheel to adjust the “speed” of whatever you happen to be doing at the time, and watch the two gauges in the corner of the screen. When the pink one (for her) or the blue one (for him) reach various points, new options become available, though these are fairly limited in the demo version.

In the full game, characters with different personality types and traits will respond differently to the things you get up to together, and there’s a persistent aspect of developing your relationship with your various creations as well besides simply doing the nasty with them. It’s not a stat-grinder in the same way as Kiss’ Custom Maid 3D 2; here the emphasis is more on the psychological aspects of sex and relationships rather than that game’s almost RPG-style min-maxing in the name of running a successful business.

Some may baulk at the idea of a game in which you have “complete control” over a sexual partner in this way, but really, Honey Select Unlimited is an ideal example of the best thing about this sort of experience: it offers the opportunity to experiment with your own fantasies in a way that doesn’t hurt anyone else, and in a situation where you might be able to learn something about yourself.

There’s a lot to like about Honey Select Unlimited even in its limited demo form, then, but regardless of how you feel about this type of game, the fact that it’s coming West officially is a significant moment for the Japanese adult games industry, and particularly for the historically rather insular Illusion. It’s acknowledgement of something that many of us have known for a long time now: the fact that there are a lot of people out there hungry for this type of experience, and willing to support developers, publishers and localisers willing to provide it without shame or censure. 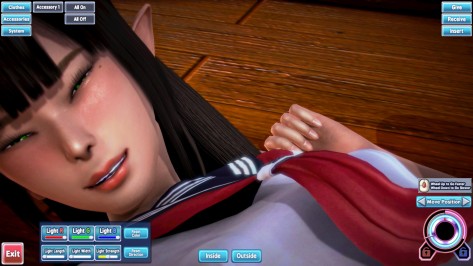 I’m certainly happy to see Honey Select Unlimited come West. It’s a sign that Fakku is serious about its game publishing and localisation efforts — plus an opportunity to finally be able to give something back to a developer that has brought countless people many hours of pleasure over the last few years… however you choose to interpret that!