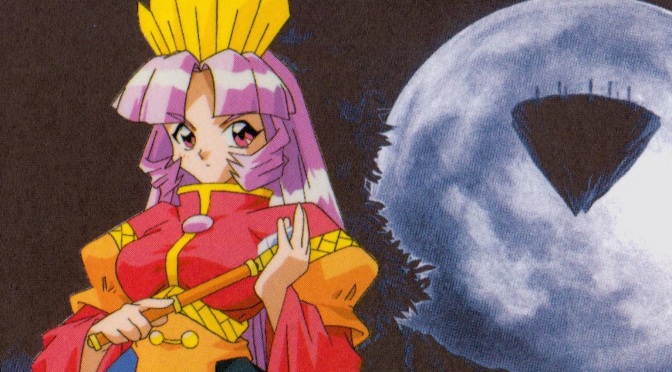 I’ve always had a soft spot for block-breakers, ever since Arkanoid on the Atari 8-bit, and Puchi Carat makes me happy in all the right ways.

Combining elements of traditional classic block-breakers with mechanics from puzzle games such as the Puzzle Bobble/Bust-a-Move series, it’s an enormously addictive, highly unusual game that is simultaneously unique and absolutely representative of the time in which it came out.

In short, if you like adorable late ’90s anime style characters, coloured things going “pop” and gameplay that is as much about skill as it is about intelligence, Puchi Carat is definitely a game that you should check out. 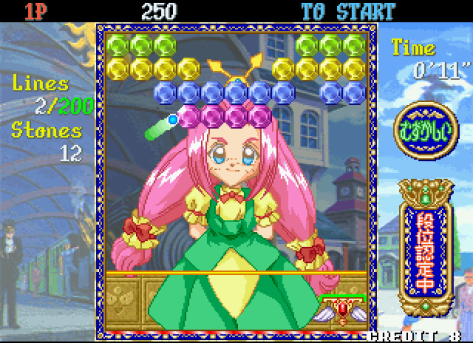 As with many other puzzlers from the era, Puchi Carat has a story, as we’ve touched on in our previous exploration of playable character Peridot. And indeed, as with most puzzle games — and indeed fighting games — of that era, it doesn’t really matter one bit, save to provide a bit of interesting context to what is going on and to help us understand and engage with the characters a little more.

The basic concept runs that there are twelve magical stones that have the potential to grant all sorts of nice things and excessive powers to whoever holds all of them, so the playable cast decides to head out and attempt to defeat all their peers in an attempt to claim them all for themselves, each for their own individual goals.

The way they go about this is by engaging in “battles” with one another. This consists of a split screen in which each player has their own play area, much like other competitive puzzle games of the era. Gems slowly descend from the top of the screen, and a ball can be bounced back and forth between them and a paddle at the base of the screen to destroy them. 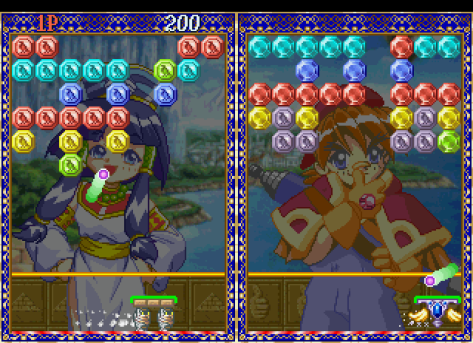 The one aspect in which Puchi Carat’s take on block-breaking differs from games like Arkanoid and its ilk is the fact that the gems you’re popping with your ball are affected by gravity in much the same way as the bubbles in Bust-a-Move are. That is to say, if a gem or series or gems is no longer attached to the top of the screen, they’ll simply fall off all at once, awarding the player who causes this with a bunch of points — and their unfortunate opponent with a pile of garbage gems to deal with, the specific attack pattern being unique to each character and the amount of gems corresponding to the size of the stack that was caused to fall.

In other words, while Puchi Carat can be played fairly sedately just chipping away at gems one at a time, it’s much more efficient to try and set up situations where there are large groups of gems hanging by a “thread”. This can be a little tricky to do accurately with the element of randomness and skill introduced by basing the mechanics around a bouncing ball rather than something a bit more “static” or predictable (such as the balloon gun in Bust-a-Move, or the falling blocks of something like Cleopatra Fortune) but it makes things much more interesting, particularly when playing against an opponent, be they human or CPU-controlled. 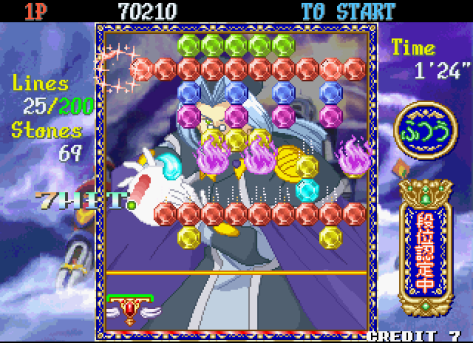 What’s even more interesting is that the game doesn’t actually discourage you from “dropping” the ball off the bottom of the screen, and in fact it can sometimes be advantageous to do so. That’s because it’s impossible to drop the ball out of play, unlike Arkanoid and its ilk; bouncing the ball off the “floor” of the play area instead causes a number of additional lines of gems to appear at the top of the screen, pushing everything down and potentially enabling you to set up some devastating combinations. You have to be careful not to do this too much, however, as the game ends if the gems reach your “limit line” at the bottom of the screen, so it becomes a balancing act between setting up big drops and keeping the screen manageable.

While the game is competitive at heart, there are a variety of different ways to play, both in the arcade original and the home ports to PlayStation and Game Boy Color. 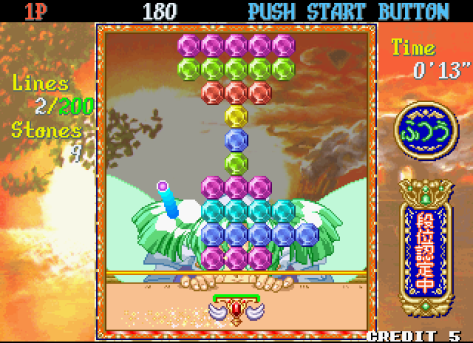 Those who prefer to play the game solo can take on the Trial Mode, which gives you a set number of lines to clear according to the difficulty, with the lines dropping down automatically as you progress and the speed with which this happens increasing as you get closer to the goal. This mode is all about efficiently clearing the screen rather than attempting to attack your opponent; while an efficient way to do this is still dropping large clusters of hanging gems, positioning the ball so it bounces around a large number of gems and destroys them before returning to your paddle is also a helpful strategy in this mode, since the gems only advance after you have returned the ball a set number of times.

The meat of all three versions is arguably the Story mode, which is implemented slightly differently in each edition. The Arcade version features three modes of difficulty — disappointingly, with all the dialogue stripped out of the Western release — while the PlayStation version features two difficulty modes plus an “Original” mode that allows you to battle opponents in any order you please, stealing their attack patterns if you win. The Game Boy version, meanwhile, only features one difficulty, but has its own unique story.

The home ports also add a Time Attack mode, which unfolds similarly to Trial Mode, only this time you’re being timed so the emphasis is on speed rather than survival. It presents an interesting twist on the formula to see if you can figure out the best way to clear the screen as efficiently as possible, and is contrasted nicely with the likewise home port-exclusive Rapid Mode, which is essentially an “Endless” variant of Trial Mode, which simply lasts as long as you do. 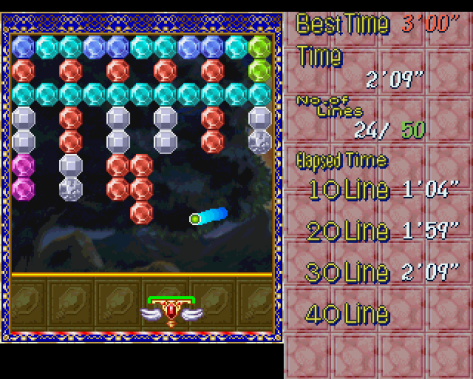 Puchi Carat is an absolute delight to play. It’s incredibly simple to understand, yet demands skill and strategy when competing at higher levels. Its visuals are charming and clear — particularly the enormous, well-animated character portraits in the background of the playfield on the PlayStation and arcade versions — and give the game a great deal of personality, making it eminently approachable for newcomers. At the same time, there’s a degree of depth to the experience, too; veteran block-breakers will love the emphasis on skillful shots with accurate positioning, and matches between two evenly matched opponents can get both frantic and thrilling very quickly!

It may not sound like much on paper, but it’s an enormously addictive game, and one I find myself returning to time after time for a bit of block-breaking fun times. 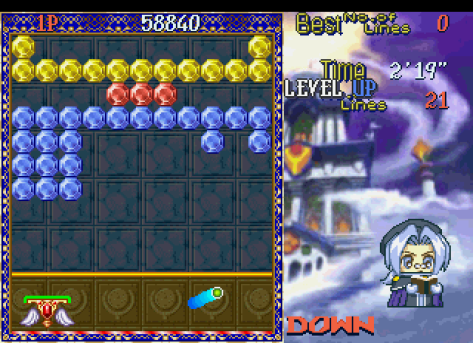 And not just because I want to do disgraceful things with Peridot. I mean, sure, that’s part of it, but I feel like she wouldn’t have nearly the same sort of appeal if the game in which she appeared wasn’t any fun in the first place. Right?

Screenshots via the rather fabulous Puchi Carat Shrine, which contains more information than you would ever want to know about this game!