We’re enjoying a bit of a puzzle game renaissance at the moment.

While we’re not quite at the same level as we were in the 8-, 16- and 32-bit eras, where puzzle games would happily share retail shelf space with 100+ hour RPG epics (Puyo Puyo Tetris aside), we are at least starting to see more and more puzzle games that aren’t free-to-play mobile titles primarily designed to repeatedly part you from your cash rather than providing a well-balanced, fun experience.

One interesting game that may well have passed you by owing to its low price and seemingly low production values is Hell Girls from Taiwanese circle SakuraGame. And you should most definitely give it a look!

Hell Girls’ premise is that long ago, three families received a blessing from the gods, causing one of their children each century to be born with powers over fire, ice or lightning. These girls are destined to travel the world, fighting off monsters and preventing Hell’s corruption from spreading to the innocent populace. We join the action just as the current generation of “Hell Girls”, as they are known, are setting out on their adventure.

If this all sounds a bit Puzzle Quest, you’d be right… kind of. The game does feature RPG elements, but they’re downplayed somewhat in comparison to Infinite Interactive’s classic. It’s perhaps best to consider Hell Girls as a puzzle game with RPG elements, while Puzzle Quest was an RPG with puzzle game elements. To put it another way, in Hell Girls the primary focus is on the moment-to-moment gameplay, while in Puzzle Quest the emphasis is on overall progression.

The core gameplay structure of Hell Girls involves selecting encounters from a gradually expanding world map and then completing them through the puzzle game aspect. These encounters include both context-free battles against monsters and “quests” with narrative context; although the game clearly wasn’t designed with story as a main focus — there’s no real introduction or scene-setting before the game proper starts — the brief dialogue scenes and occasional lewd CGs keep things from feeling too dry and help give things a sense of moving ever onwards.

Before you begin an encounter, you’re given a preview of your impending opponents, including their stats and skills, allowing you to select which of the three girls you feel will be the most appropriate for the job. The Fire Maiden has the strongest physical attacks, the Lightning Maiden has the strongest magical attacks, and the Ice Maiden has the most health. Each also has their own unique lineup of skills that can be equipped (with additional skills available to purchase in shops across the world map), and different costumes allow you to change their appearance and adjust their stats in both positive and negative directions; one might increase the girl’s physical damage output in exchange for making it harder to heal, for example.

Once you’re into “battle” you’re presented with a grid containing tiles of various types. Swords represent physical attacks, stars represent magical attacks, hearts represent healing, potions represent mana and shields represent armour. In order to make use of these tiles, rather than swapping them around in the usual match-3 manner, you instead have to trace a path from one to another horizontally, vertically or diagonally, at which point they disappear and apply their effect — direct damage in the case of the swords and stars, and more indirect effects in the other cases.

The monsters you face will attack you every few turns, and you can soak some of this damage by matching shield symbols to fill your “armour” bar. Matching further armour symbols when the bar is full instead provides direct physical damage, so there are no real “wasted” turns.

Mana, meanwhile, is used to trigger your girl’s skills. If you have enough mana, you can use as many skills as you like in a single turn, though each has a cooldown period before it can be used again. Skills range from simple direct physical or magical damage abilities to the ability to manipulate the board by changing one type of tile into another. This generally plays to the girl’s strengths or covers her weaknesses; the Fire Maiden, for example, can change magical attack stars into physical attack swords, since she is better at physical attacks.

Matching four or more tiles creates a spellbook that is unique to each girl in the position where the last tile previously stood. This can then be included as part of a subsequent path you trace to cause a particular effect: the Fire book explodes and destroys the gems around it, the Lightning book directly attacks the otherwise indestructible “exotic” tiles on the grid, and the Ice book affects rows, columns or both.

Using the spellbooks effectively is essential if you want the top three-star rating for each level, since a requirement for this is to open a treasure chest before its counter expires and sets off a trap. The treasure chest appears as an “exotic” tile partway through the encounter, and must be damaged three times using spellbooks to open it and receive the rewards it contains (usually money), otherwise it causes damage to your girl. As you might expect, this requires a bit of forward planning to ensure your spellbooks are positioned in helpful places, particularly in the case of the Fire and Ice Maidens — though thankfully, there’s no time or speed pressure, since you can take as long over each turn as you like.

Further interest is added by various monster abilities that can affect the grid of tiles. Sometimes they might create exotic tiles that buff or heal them, while at others they might inflict an ongoing status effect such as poison until you clear all the normal tiles off squares that are marked with a coloured glow. There’s a wide variety of these abilities that get more and more interesting — and tricky to deal with — as you progress through the game and encounter more fearsome monsters. In this way, the core gameplay is kept feeling fresh without mixing things up too much and making the experience feel flighty and unfocused.

As you continue through the game, you have the opportunity to increase the power of the girls by spending “spiritual energy” earned in battle, and acquiring new skills by spending money. Some quests require the expenditure of either or both of these resources, however, so it’s worth checking this before you level up too enthusiastically. That said, it’s a simple matter to grind previously completed encounters for additional resources, so it’s not the end of the world if you do accidentally find yourself out of pocket come crunch time. 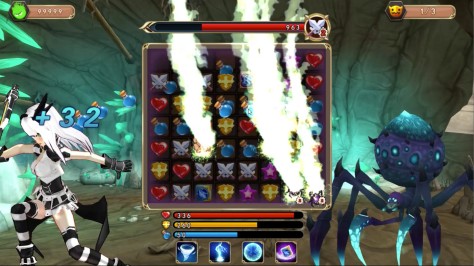 Hell Girls is a highly enjoyable game. While its narrative shortcomings are immediately evident and it would probably have been an even better experience with a bit more personality in the writing, its core gameplay is immensely solid and its presentation is good, featuring lovely 2D artwork (particularly in the lewd CGs) and some decent 3D character models for the girls in battle. It also has some very catchy music, though it might have been nice for this to vary between different tracks a little more often than it does — and for whoever was responsible for the sound to make the loop point a bit smoother!

Ultimately none of the criticisms that could be levelled at Hell Girls diminish the amount of enjoyment it’s possible to get from it, particularly given its low price point. It’s a well designed game with straightforward but deep and strategic central mechanics, plus pretty girls and lewd CGs. What’s not to like about any of that?