Although the abstract nature of the puzzle game genre makes it theoretically possible to make a game out of pretty much anything, we tend to see a lot of the same sort of thing.

In particular, over the years, we’ve seen a lot of “match dropping things so that their colours match”, “swap things around to make lines of three like-coloured doohickies” and “shoot bubbles at precarious arrangements to make groups of three like-coloured blobs”. As such, it’s always rather pleasing to come across a game that does something a little different from one of these common conventions favoured by the most popular titles in the genre.

Starsweep, a game that originated in Japanese arcades and was subsequently ported to PlayStation and Game Boy, is just the ticket to refresh the jaded puzzle fan.

Starsweep immediately distinguishes itself by its time pressure on the player coming not from blocks dropping from the top of the screen, but instead arrangements of blocks rising up from the bottom. This mechanic, somewhat reminiscent of how Tetris Attack and the Puzzle League series do things, forces you to think about things in a different way, since it demands that you clear a path for yourself rather than try not to block yourself into a corner.

Starsweep’s basic mechanic revolves around colour-matching, but rather than dealing with objects that take up a single “tile”, we’re instead concerned with straight blocks that are three tiles wide, with a star at either or both ends. To remove a block, you simply need to touch two stars of the same colour; this will remove both the stars and the blocks they are attached to, and anything these blocks were holding up will fall down to the bottom of the screen or until they hit something.

As you might expect, a big part of high-level Starsweep play involves setting up chain reactions of blocks, and this can be achieved both through careful forward planning and taking advantage of the game’s gravity system. When you throw a block into the playfield, it will drop until it hits the floor of the well or another piece, but when the screen scrolls up by a step, any pieces that were on the base of the well but which are now unsupported will drop down. Unfortunately, it can sometimes be hard to predict what is coming next, but when you pull off a combo in this manner it is immensely satisfying.

Starsweep features a number of different ways to play, including a single-player mode where you simply have to “dig” down as deep as you can against increasingly tight time pressure, along with the obligatory versus mode that will have you shouting and swearing at your significant other or best friend in no time. In true late ’90s arcade game tradition, the later stages of the player-vs-computer “story” mode are nigh-impossible to beat and will lead to a lot of controller-flinging if you’re anything like me — and yet somehow the simple mechanics will keep you coming back for just one more try, utterly convinced that this time will be the time you pull off an amazing combo and send that CPU opponent packing once and for all.

The home ports of the game also feature an “Attack Mode”, which consists of a variety of different challenges designed to test different aspects of your skills. Link Attack, for example, tasks you with getting as many chains as possible within a short time period, while Combo Attack challenges you to clear as many blocks simultaneously as possible given a minute to set up your masterpiece.

Both the single-player mode and several of the Attack Modes feature “obstacles”, which take the form of clouds that cannot be directly matched with the coloured star blocks. Instead, to clear an obstacle, you must match star blocks so that they touch the obstacle, at which point it will dissipate and get out of your way. This aspect is somewhat similar to the Nuisance Puyo mechanic from the Puyo Puyo series, and the Attack Modes in which you have to clear the screen of obstacles or simply survive as long as possible while obstacles are continually being thrown your way are great practice for dealing with these annoyances, which will come flying your way thick and fast in the versus modes.

Starsweep is a game that is easy to pick up but very difficult to master, because it requires a very different skill set from that required for success in modern, popular games such as Bejeweled, Tetris and their derivatives. In particular, the aspect of the game where you can throw blocks into a gap in the middle of an arrangement rather than simply dropping them on top takes some getting used to, but once you get your head around that it opens up a whole host of potential new strategies and routes to success.

It’s a charming, enjoyable and dangerously addictive game that remains enjoyable and playable today. Moreover, its distinctive, unusual mechanics immediately set it apart from modern games in the genre, making it a game long overdue at the very least a re-release, or perhaps even a modern reimagining a la Puyo Puyo Tetris. 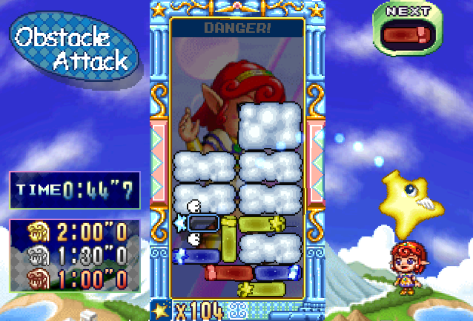 Starsweep is a game very much of its time in that it’s somewhat difficult to imagine a game like it getting a full retail release today, but no-one batted an eyelid at its presence on store shelves when it was originally released. That said, the release of Puyo Puyo Tetris on PlayStation 4 and Nintendo Switch has demonstrated that there absolutely is a market for substantial standalone puzzle games outside of the free-to-play mobile market, so perhaps it’s high time we started seeing more games like this again.

In the meantime, the only way to play Starsweep is to track down its original arcade, PlayStation or Game Boy incarnations and find some means of playing them, be it on original hardware or via emulation. It’s worth your time to do so, however, if only as a reminder of how prolific and inventive the puzzle game genre used to be.