One interesting thing about Granblue Fantasy when compared to a more traditional MMO on computer or console is the fact that what we’d typically regard as the “endgame grind” is actually spread out throughout the whole game.

This is partly due to the game’s overall structure and progression: you’re not levelling up a single character and thus there isn’t a “level cap” to reach because at any time, you can switch out your party members, your weapons and your summons to create a new experience for yourself.

Aside from this, however, it allows players to get into the multiplayer content — often restricted to high-level play in other mobile-social RPGs — almost right from the outset.

There’s a certain degree of freedom in how you choose to approach your overall progression in Granblue Fantasy. There’s nothing to stop you focusing exclusively on the main story and each chapter’s sidequests, using only the party members you’re awarded for free as the narrative proceeds. This may not be the most efficient way to play, but it’s certainly a way to play that anyone can enjoy without having to commit too much time or effort.

What most people quickly find themselves getting drawn into, however, is the extensive metagame of collecting characters, weapons and summons that synergise nicely with one another, levelling them up and making their party as efficient a killing machine as possible. Interestingly, the game never really specifically encourages you to do this, but if you’re paying attention it’s not hard to figure out.

By far the most common approach to developing a powerful party is to focus exclusively on a single element. In my case, I’ve opted for water, since my SSR draws in the gacha so far have netted me the water characters Izmir, Erin and Silva, early story characters Katalina and Io are both water-based, and two solid-seeming characters from the recent Idolmaster event — Anastasia and Minami — were also water-type.

Building a party is much more than just picking all characters of the same type, however. A much more time-consuming and challenging job is ensuring that your ten equipped weapons and main summon all have passive skills that complement your party’s build, ideally by buffing water-type characters’ attack power as much as possible. And then ensuring that those weapons are levelled up. And that those weapons’ skills are powered up, too. And then breaking their level caps to make them even stronger.

There’s a lot to do, in other words, and the sort of things you’ll likely find yourself drawn into even in the early hours of the game — much as I have — are the kinds of things more typically reserved for endgame activities in more conventional MMOs. Consider something like Final Fantasy XIV, for example; as you progress through the early levels, you can simply acquire equipment from vendors and dungeon drops, but when you reach levels 50, 60 and 70 (the “endgame” levels for the original game, the Heavensward expansion and the most recent Stormblood expansion respectively) you have the option to undertake much more involved and time-consuming quests to acquire powerful weapons that demand a lot more from the player than simply handing over a fistful of gil.

In Granblue Fantasy, however, this grind to achieve the best possible loadout begins from the very outset and is constant throughout your entire experience with the game. This is partly due to the fact that the game is balanced rather differently to something like Final Fantasy XIV, having more in common with a single-player RPG than a typical MMO. What this means is that rather than the emphasis being on acquiring gear that will simply allow you to survive a challenging encounter, in Granblue Fantasy the game mechanics practically encourage you to get as overpowered as possible so you can rip through even multiplayer raid bosses’ HP bars with ease. Because the more easily and quickly you’re able to shred enemies, the easier it is to grind for the next step in your grand ambitions. And so the process continues. 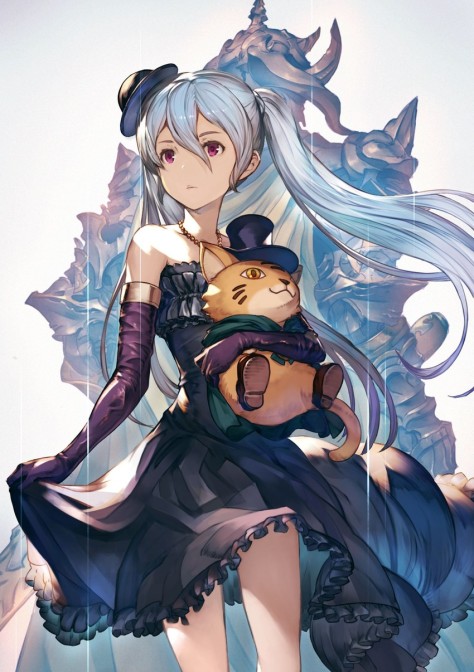 Thankfully, since Granblue Fantasy has been around for so long now (relatively speaking, anyway, having enjoyed a particularly impressive run for an online mobile game) there’s plenty of content in the game to challenge even seasoned players with frighteningly powerful party lineups. Able to solo normal raid bosses? Then try a Hard one. Then a Very Hard one. Then an Extreme one. Then an Impossible one. Or how about a Nightmare one? And if you reach a stage where you can’t even make a dent in a boss’ HP bar, you can always call in other players to help and discover that yes, you clearly still have a long way to go.

I’ve used the word “grind” throughout this piece, and that term often has negative connotations, but in Granblue Fantasy it manages to always feel rewarding, whether it’s simply being able to deal some respectable damage to a boss that had previously been giving you grief, or unlocking new character art and skills by raising your party members’ level caps.

One nice thing is that there are usually multiple ways to go about something you want to achieve. Take uncapping a character, for example: this is a process that requires the acquisition of a number of different treasure items according to the character and how many times you’ve already uncapped them. One option to acquire these items for free is to run the appropriate daily dungeons throughout the week, which have a random chance of dropping the items you need. Another is to collect lower-tier (and more common) versions of the items you need, then trade them in for the actual one you want. Or attempt to loot them from raid bosses. Or regular story quests. Or, as I most commonly find myself doing, trade in Cerulean Stones acquired from playing the gacha — which, let’s not forget, you can play for free on a fairly regular basis if you ensure you make progress through any available uncleared quests whenever you can — to just get the items you need.

Weapons and summons are a little trickier, as these typically require another copy of the same weapon or summon in order to uncap them. This isn’t an easy feat to accomplish, particularly in the case of SSR cards, so there’s also the option of acquiring various loot items as an alternative to just repeatedly playing the gacha and hoping. In the case of event-exclusive summons, too, there are often ways to acquire additional copies through earning trophies even after the event has concluded; the recent Idolmaster event, for example, allows you to pick up additional copies of the Brunnhilde summon simply by summoning her a set number of times. Of course, this would appear to assume that you remembered to grab a Brunnhilde during the event in the first place, but once you have one, you can grind your way to fully uncapping her at your own pace rather than having to squeeze it all in to the limited event period. Alternatively, if you didn’t get your own Brunnhilde, you can still acquire one by summoning other players’ Brunnhildes enough times to get the trophy, though this, of course, requires that they have her set as one of their support summons.

This flexibility and variety in Granblue Fantasy is one of the game’s great strengths, though it’s also something of a mixed blessing; it makes the game appear quite complicated and daunting to newcomers, and not much of this is explicitly explained from the get-go, leaving new players to either work things out for themselves or rely on the extensive collected knowledge of the rest of the Internet. (The Granblue Fantasy Wiki is a good place to start.) Once you get your head around the various systems and start to set your own goals, however, it’s hard not to get hooked on the game’s gradual, constant progression… and before long you’ll find yourself hosting regular Omega raids, attempting to fill out your weapon grid with the “perfect” combination of equipment and buffing up your summons to maximise your damage output.

The rabbit-hole runs deep. Don’t say I didn’t warn you!