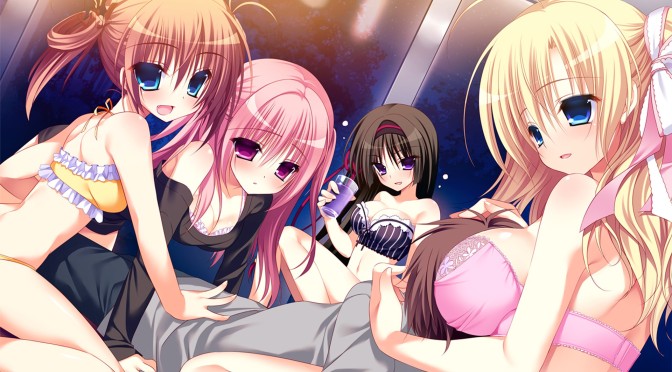 With the rise in free-to-play mobile games, the humble standalone puzzle game has become something of a rarity.

That’s not to say that they don’t exist at all any more, however, and, more to the point, puzzle games as a genre generally age a whole lot better than other types of game due to their abstract mechanics and non-reliance on realistic graphics.

With that in mind, then, let’s kick off a regular look at puzzle games from both yesterday and today to run alongside the other Essentials columns for Wii U games and shoot ’em ups.

First up for examination is a modern title from Grisaia developer Frontwing, loosely based on their unlocalised Pure Girl and Innocent Girl visual novels: Purino Party.

Purino Party is essentially a short, multi-route visual novel in which its major scenes are punctuated by puzzle game sequences. The concept sees the protagonist moving into a dormitory with four other girls (the cast of Pure Girl) and getting the opportunity to get to know each of them rather intimately. Once this is done, the story moves on to a second group — the cast of Innocent Girl — and the process repeats until you have quite literally seen everything.

Each of the girls has a particular personality type that is reflected in their visual novel scenes — some of which prove to be rather surprising. Yogiri, for example, might visually look like your typical, confident student council president type, but quickly reveals herself to have a considerable interest in pornography and fetishes; she believes that learning about someone’s sexual tastes and preferences is a far more interesting and honest way to get to know someone than attempting to make awkward small talk. Consequently, she’s very up-front in discussing these things, making her an appealingly confident character without crossing the line into bossiness. 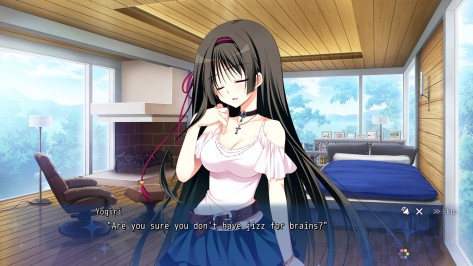 The remainder of the cast takes in most of the popular anime tropes including little sister, tsundere and kuudere, though each character is presented with enough charming individuality about them to become more than simply a walking, talking cliché. In particular, given Purino Party’s origins as two separate eroge, each of the girls is rather frank about their attitudes towards sexuality in their own way: Suzu, for example, finds eroticism in absolutely everything around her, while Miyako gets particularly excited when doing mundane things with her mouth.

Ultimately the narrative that ties things together is throwaway fluff that doesn’t really have anything too deep and meaningful to say. That said, it’s worth noting that each and every one of the characters is made to feel like a unique person in their own right — you’ll doubtless come out of the whole thing with at least one favourite — and getting to know them over the course of each of their narrative arcs is an eminently satisfying reward for completing their puzzle sequences. 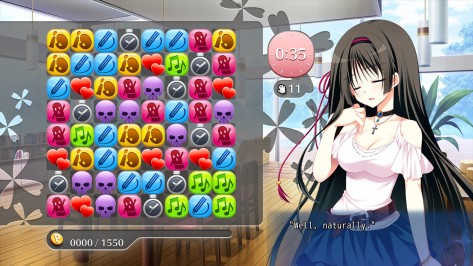 Which brings us on to those puzzle sequences, since that, after all, is the real reason we’re here and not just playing a straight-up visual novel.

Purino Party is a tile-matching game that initially appears to be in the Bejeweled mould, until you discover a few important characteristics about it that make it into something very distinctive in its own right.

In each stage of the puzzle game, you’re given a points target to attain, and both a limited time and limited number of moves in which to achieve this. Both of these are tight and challenging pretty much from the outset of the game — though a post-launch update did add an optional “easy mode” for those who complained that the game was too difficult, or those who simply wanted to focus on the story.

Each girl has a particular preference of coloured tile to go for, with the colour and symbol on the tile representing an aspect of their personality. Consequently, matching their favourite colour rewards you with considerably more points than you would otherwise get, so emphasising these is usually the best route to success.

There are also symbols to match that increase the amount of time you have or trigger “Fever Mode”, which provides you with substantial bonuses while it is active — but to complicate matters there are also skull symbols that reduce the number of available turns you have.

Purino Party’s twist on the usual Bejeweled-style match-3 formula is that you can pick up a piece and, for a few seconds, slide it anywhere you like on the board, with pieces it passes through sliding out of the way accordingly. In this way, if you’re quick enough, you can set up several groups of tiles to match simultaneously when you drop the one you’re carrying, clearing more of the board at once and providing greater potential for scoring. Using this technique effectively is absolutely essential to success, particularly in the later levels, since if you simply follow the usual Bejeweled model of only swapping two adjacent tiles you won’t get anything done.

The combination of the unusual but effective tile-moving mechanics, the tight time limits and the limited number of moves gives Purino Party an appealingly frantic feel to its puzzle game sections, and, assuming you’re not playing on the optional easy mode, an enormous sense of satisfaction when you successfully clear one and move on to the next stage of the story.

If you’re reasonably skilled at puzzle games, the whole game doesn’t take a whole lot of time to get all the way through, and after you’ve beaten it once there’s arguably little reason to return save for watching the story again — there’s no “endless” mode or suchlike, sadly — but while it lasts it’s an enjoyable, appealing, charming and unabashedly sexy experience that is a welcome addition to the modern puzzle game genre.

And not a microtransaction in sight. Absolute bliss.