Developed as a collaborative effort between Nintendo and action game veterans Platinum Games, Star Fox Zero was intended as something of a reboot of the series, retelling the stories of the original games and reflecting the original gameplay styles while incorporating some new elements of its own.

It was these new elements that caused some consternation among those who had difficulty adjusting to them, but this didn’t stop Star Fox Zero from being an interesting and worthwhile addition to any Wii U owner’s library. 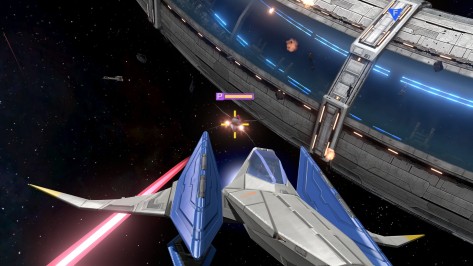 Star Fox Zero most closely resembles the Nintendo 64 incarnation of the series, in that much of it is a rail shooter that unfolds from a perspective floating somewhat behind your craft. In this way, these segments effectively unfold as a 3D take on traditional arcade-style shoot ’em ups in that there’s an emphasis on dodging things as much as there is on shooting things. Further comparisons to 2D shmups can be drawn through the game incorporating a standard shot attack, a lock-on attack and devastating bombs.

Like Star Fox 64, Star Fox Zero switches to “All-Range Mode” in a number of areas — typically for boss fights or pitched battles within a specific area. In “All-Range Mode”, you have the freedom to fly around a small geographic area as you please rather than as the choreography of the level dictates; these segments, consequently, resemble something like LucasArts’ Rogue Squadron or Namco’s Ace Combat, albeit in smaller regions. They typically incorporate the necessity for somewhat fancy flying — inside buildings, avoiding hails of bullets, spotting hard-to-reach weak points — and require a distinctly different set of skills to the rail shooter components. 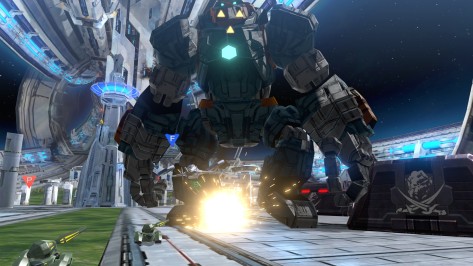 Again like Star Fox 64, Star Fox Zero also features occasional jumps into other vehicles that handle a little differently to the standard Arwing fighter. In this case, there’s a “walker” configuration that allows parts of levels to unfold somewhat like a third-person shooter, a gyrocopter that features a robot that can be lowered into small gaps to retrieve objects, press switches and hack computers, and a tank that can transform into a bomber for limited periods. Each of these are used at specific moments in the overall progression of the game and consequently only show up when they “make sense” to prevent confusion.

Perhaps the most controversial aspect of Star Fox Zero was the implementation of GamePad motion controls for fine-tuning aiming in all vehicles. This meant that while basic aiming duties were handled on the main TV screen as in Star Fox 64, tilting the GamePad around could adjust that aim in different directions, and the GamePad screen displayed a cockpit view of the action to assist with this. Quite a few encounters in the game involved tackling enemies with small, precise weak points, necessitating the use of the GamePad controls to actually hit them, particularly when passing by at speed, and many people found dividing their attention between the game’s two screens to be unnecessarily challenging. It was, however, something that you could become accustomed to with a bit of practice, and after a run or two through the game became second nature.

Another common criticism of the game was its short length, though in this instance this was due to a fundamental misunderstanding of how the shoot ’em up genre has developed over the years. Because make no mistake, Star Fox Zero, despite its pretensions towards having a narrative, is very much an arcade style shoot ’em up, as evidenced by the fact it unlocks an “Arcade Mode” after you clear it, in which rather than selecting levels to take on at your leisure, you have to get as far as you can on a single “credit”.

What this means in practice is that the game is by no means designed to be over after you’ve “beaten” it. Quite the opposite, in fact; clearing the game is just the beginning — from here, the intention is for you to play and replay for high scores and medals, attempting to “one credit clear” Arcade Mode, unlocking all the hidden content that the game has to offer and proving your skill. It’s a true Platinum game at heart, in other words; a game that yes, probably anyone can “finish” if they try hard enough, but mastering is another matter altogether. 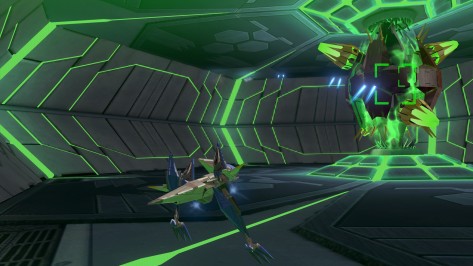 Perhaps this is where some of the criticisms came from: Star Fox had historically been one of Nintendo’s many accessible, family-friendly franchises — and for sure, there’s nothing “adult” or “offensive” about the actual subject matter involved in the game. However, where Star Fox Zero differs considerably from its predecessors is that it’s both a much tougher game than its forebears in general, and a game with a much steeper learning curve, too. Consequently, it’s not altogether surprising — and certainly not anything to be ashamed of — that some people found themselves bouncing off before they discovered the game’s true joys.

Those who stuck with it, took the time to learn the idiosyncrasies of the controls and handle it as a typical Platinum game — one that you’d need to practice in order to get good at — would find an immensely rewarding experience, however. It is, for sure, an interesting evolution for the Star Fox series as a whole, and one that accurately reflects trends in the modern shoot ’em up genre; unfortunately, it’s this aspect that puts it somewhat at odds with Nintendo’s trademark accessibility and immediate fun factor.

Star Fox Zero is an essential part of the Wii U’s library not because it’s a game that has universal appeal, unlike many of the previous games we’ve covered in this column. Rather, it’s a game that is noteworthy for trying something a little different with an established franchise while still remaining true to its roots. It’s a game that shows Nintendo hasn’t forgotten how to create “hardcore” games that offer a stiff challenge and a steep learning curve to master.

And, well, it’s a solid reimagining of Star Fox for the 21st century, too. Which is all I originally wanted from it — but I ended up getting something much more interesting.

Wii U Essentials is a series of articles that each focus on a single retail game from the Wii U’s library. These articles aim to build a comprehensive record of this turbulent period in Nintendo’s history: a time when the company released some of its very finest games, yet it struggled to recapture popular attention and commercial success in the same way as the original Wii did.

One thought on “Wii U Essentials: Star Fox Zero”