This week I wanted to return to one of my favorite narrative-based games of all time, Freebird Games’ To The Moon, which is also an interesting discussion point from the perspective of presentation, gameplay and emotional engagement.

In To The Moon, you take on the role of Eva Rosalene and Neil Watts, two doctors with a super-cool if rather morbid job: granting dying patients’ final wishes. They do this by manipulating the memories of the patient so they feel like they have accomplished the thing they always wanted to achieve. Unfortunately, the nature of the procedure is such that the patient normally dies (happily) shortly after they have “achieved” their goal; consequently, it is only used on those who have no hope of recovery.

[Editor’s Note: To The Moon isn’t a Japanese-developed game, but it draws enough inspiration from JRPGs, visual novels and “hybrid” titles such as Corpse Party to still be well within MoeGamer’s field.]

We join the story as the two protagonists arrive at the house of dying old man Johnny Wyles. Johnny’s wish is very straightforward: he wants to go to the moon, but over the years, he has forgotten why. By travelling back through Johnny’s memories and attempting to insert the desire to go to the moon at the earliest opportunity, they hope to “rewrite” the rest of his life so he can die peacefully thinking his lifelong wish was fulfilled.

Unfortunately, things do not go quite according to plan. Johnny’s memories, it seems, aren’t quite as simple as they initially appeared, so the two doctors find themselves attempting to unravel the mystery of what really happened to Johnny in his life to make him forget why he had such a desire in his head.

To The Moon may not be presented like your everyday visual novel — aesthetically, it has more in common with titles like Corpse Party and 16-bit era role-playing games — but structurally, it’s very much like a single-path visual novel. The narrative is rigidly linear with no “branches” and the player’s opportunities to interact with the story are relatively minimal, but that doesn’t stop the whole experience being super-compelling.

This fact can be attributed to a number of things. Firstly, the presentation. Despite the self-consciously retro visual aesthetic, To The Moon is a beautiful game. It has distinctive characters, well-designed environments that help to support the story as well as simply providing a backdrop to the action, and a lip-quiveringly beautiful soundtrack that still brings tears to my eyes within moments of hearing the title song. Couple that with some truly excellent writing and characterization and you have a highly memorable experience that will stay with you for a long time — and which will pierce the heart of all but the most stoic individuals.

One of the most interesting things about To The Moon’s narrative structure is the way it is layered. In most visual novels, you “ride along” inside the protagonist’s head and occasionally make choices for them, meaning there are two layers of understanding at most: what the protagonist understands, and what you as the player understand — because these two things are not always the same.

To The Moon adds an additional layer to the mix by bringing Drs. Rosalene and Watts into the mix; as passive observers of the actual protagonist Johnny — who is not controlled by the player and cannot be interacted with by Rosalene and Watts — they bring their own ideas to the table which may or may not agree with each other or with the player. 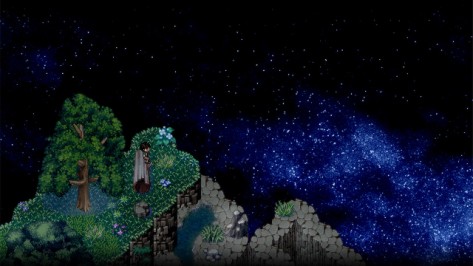 It’s an interesting extra layer of “distancing” the audience from what is unfolding. Far from pulling you out of the action, though, it provides you with ample opportunity to make your own mind up about what is going on, because there are an awful lot of aspects of To The Moon’s story that are left dangling — not through lack of development, I might add, but through a well-applied use of the “show, don’t tell” principle. To say exactly what this relates to would, of course, be to spoil a significant part of the game’s story so I’ll leave that particular discussion there — play the game and you’ll see what I mean.

It helps, of course, that the characters in To The Moon are all so well-written. Drs. Rosalene and Watts, for example, bring a welcome touch of light-hearted humor to the otherwise rather serious story — due to the line of work they’re in, Watts especially has developed a rather irreverent sense of humor as a means of dealing with the tragedies that their work usually ends in, but Rosalene’s exasperated retorts to his sometimes rather childish jokes are just as entertaining. They make a good pair, and it’s clear that they care deeply about one another.

It’s the development of Johnny and his wife River that deserves the most praise, however. Their relationship over the years is perhaps best described as “complicated,” but it’s sensitively handled throughout, and by the conclusion of the game you have a very good understanding of them both — largely because you’ve seen them both at a number of key points in their life and seen how they interact with and relate to one another. 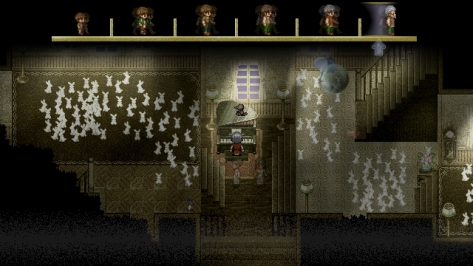 Despite not having any control over how their story unfolds, it’s still incredibly touching to watch and contributes enormously to the emotional punch in the gut that the game administers in its final moments — a blow that caused me to break down in full-on tears when I first witnessed it. And not the “my eyes are leaking” sort of tears that Final Fantasy VII gave me all those years ago; this was full-on sobbing. It wasn’t pretty, but it was testament to the effectiveness of the story being told.

Knowing what the conclusion to the story is likely to be from the very outset doesn’t make it any less affecting — rather, the wonderful job the game does with characterization and narrative development means that it can still pack an incredibly powerful punch.

To The Moon is a few years old now, but still well worth taking a look at. If you haven’t picked up a copy, be sure to give it some serious thought — it’s only a short game in terms of play time, but it’s one that will stay with you for a very long time afterwards. Those who have played it will be pleased to note that a sequel, Finding Paradise, is due out in the summer of 2017.