Kadokawa Games’ Root Letter, first in their new Kadokawa Games Mystery series, quietly snuck out onto the market at the end of October, just four months after its Japanese release.

The proposed series is set to be a collection of visual novel-cum-adventure game hybrids for PlayStation platforms that feature real-world locations, artwork from Love Plus character designer Mino Taro and a cast of fictional actresses who will play different roles in each game. The plan, presumably, is to create a series of adventures that, while distinct in their own right in terms of story, will have numerous thematic and stylistic similarities throughout that make them feel like “part of a set”.

So far, all we have to judge the series on is its inaugural installment Root Letter, but fortunately it’s a very strong start indeed, eminently worthy of your time if you’ve ever enjoyed the Ace Attorney or Danganronpa games.

Root Letter’s premise is noteworthy for eschewing the usual “high school kids do high school things” trope that most visual novels tend to focus their action on. Instead, the main cast of Root Letter are all in their early 30s and trying to get on with their lives when the shadows of a mysterious event that occurred 15 years ago start to show up.

Root Letter’s protagonist was penpals with a girl named Aya Fumino in their last year at high school. Altogether, he believed that they exchanged ten letters with one another before losing touch. However, one day when tidying up his apartment, he discovers an eleventh letter without a postmark in which Aya seemingly confesses to a murder. With only her return address to go on, he heads to her hometown of Matsue, capital of Shimane Prefecture in Japan.

Upon arriving, he finds only an empty, overgrown lot where Aya’s house should stand, along with two conflicting stories: firstly, that Aya’s house burned down at Christmas 15 years ago, and secondly, that Aya has been dead for 25 years having succumbed to an illness. Mysterious.

What then unfolds is the protagonist’s attempt to uncover the truth of who the girl he was exchanging letters with really was, what actually happened to both Aya Fumino and her house, and why no-one seems to want to talk about either of these events.

Rather than being a conventional visual novel with limited interaction and an emphasis on narration, Root Letter adopts the “ADV” model seen in early PC-88/98 Japanese narrative games and PC games that were heavily inspired by them, such as Sakura Soft’s Three Sisters’ Story and Apricot’s Nocturnal Illusion. For those unfamiliar with such titles, these games eschew long stretches of “hands-off” narration from the protagonist in favour of an adventure game-style interface in which you can freely move between locations, talk to people present and examine objects in the scene. In this way, the player is made to feel more like they fully inhabit the role of the protagnist rather than simply riding along inside their head.

This style of presentation is mostly an illusion, however; there is still only one “correct” way to proceed through the story, and if you work things out before the protagonist does, you need to guide them through the process at their pace rather than simply skipping ahead to what you think the answer to the current conundrum actually is. The flip side of this is that it’s near-impossible to get “stuck” on a puzzle as in more conventional adventure games, because you always have the option to just stand around and “Think”, which causes the protagonist to give a fairly obvious clue as to what you should do next — this keeps the story flowing along at a good pace without interruptions.

Unlike the older titles mentioned, however, Root Letter does have segments where it’s possible to “fail” and have to retry. These take the form of Ace Attorney-style interrogations where you confront someone you believe to be one of “Aya’s” classmates from fifteen years ago. Using the knowledge you have obtained and the items you have collected, you must expose the contradictions in their testimony and push them towards admitting the truth — but giving too many incorrect objections will fail the process.

These interrogation sequences are split into discrete phases, the end of which are marked by an unusual but effective mechanic where you have to choose how intensely to argue a point using an unpredictably pulsing meter. It’s not just a case of arguing as aggressively as possible throughout, either; you need to keep an eye on the statements on screen as the meter rises and falls in order to make sure you say the right thing at the right time. The game even subverts this mechanic in a couple of places, once by allowing you to “blow your top” and exceed the top limit of the meter and once by the correct response simply being to stay silent. Accompanied by music that rivals Ace Attorney’s famous Pursuit ~ Cornered! in overblown intensity, these interrogation sequences make for some of the game’s most exciting moments.

The story itself is well-paced and interesting. Each chapter opens with one of “Aya’s” letters that introduces one of her seven classmates, and subsequently the chapter itself goes on to explore that classmate in detail: what they were like fifteen years ago, what they are like now, what happened in the intervening time and why they are so reluctant to talk about their friend. You’re given the opportunity to reply to the letter after reading it, too, and your choices as the protagonist ultimately determine which of five very different routes the game will proceed down in its final two chapters. Pleasingly, on subsequent playthroughs, there’s the option to just completely skip whole chapters at a time once you’ve sent your replies to the letters, meaning you can jump quickly to the point where the narrative paths diverge.

The five routes head off in extremely different directions ranging from the mundane to the fantastic — government conspiracies, Japanese mythology and violent ghost stories — though one of the more mundane ones is clearly intended as the “true” route. While many of them may appear to contradict the others in their major story beats, there are certain small details you uncover in each of the routes that do complement one another and help you to build up a complete picture of why everything happened the way it did.

Saving the “true” route — known as “Bonds of Marriage” — for last is probably the best idea, not least because all of the other routes end very, very badly to varying degrees, but also because it’s clearly designed to be played once you have all the knowledge you acquire from the others. The game’s lineup of trophies seems to reflect this, too; you get one trophy for clearing the four “bad” endings, and another for clearing all of the endings, including the “true” route.

Thematically, Root Letter is all about the journey into adulthood, and how we often have to give up our dreams in favour of boring old practicality. To say too much about how this is reflected in the narrative itself would spoil some major moments, so I’ll refrain from doing so here, but suffice to say it’s a story that will very much resonate with older readers as much as the more typical young adult audience for which this sort of thing is usually intended. Even the real-world setting helps with this: by setting the action in a real place — there’s even an in-game guidebook to provide you with background information on the various locations — we’re reminded that this is a story about “real” people rather than caricatures.

It’s philosophical and thought-provoking without getting preachy or pretentious, and the characters are all designed to be realistic and believable rather than common anime tropes, subversions thereof, or exaggerated, comic book-style characters. As a complete experience, it’s ultimately rather sombre and melancholy, even throughout its most “positive” conclusion, but it’s eminently relatable, humble and down to earth about everything it depicts. It’s a thoroughly modern work that embraces and understands the feeling of glumness that the reality of adult life can engender in many of us, though there are enough reminders of the optimism of youth throughout to prevent it from simply being non-stop depression. For those of us who are at the same points in our lives as the main cast members, it’s simultaneously nostalgic and contemplative; almost a haven of peace away from the noise of much of the rest of interactive media. 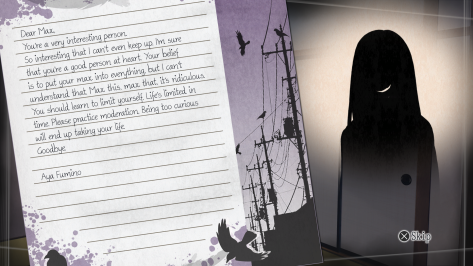 Root Letter doubtless won’t be to everyone’s taste, but it’s abundantly clear that it’s not trying to be. Instead, it’s arguably taking specific aim at, for want of a better term, a highbrow, intelligent audience that wants to think about what they play, even after they’ve played it. It’s an incredibly strong start to the Kadokawa Games Mystery series, and I sincerely hope that we see many more games like it in the near future.