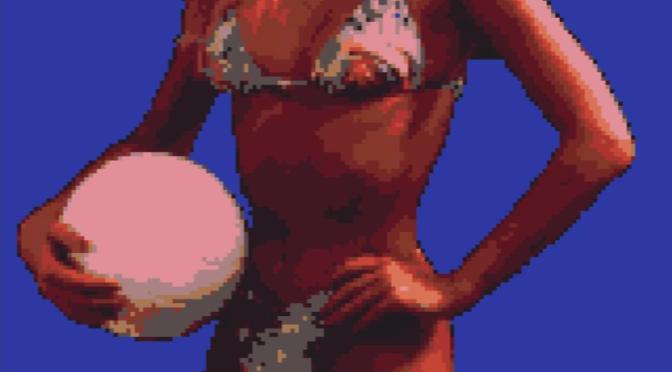 Dear old Atari. They captured lightning in a bottle in the early days of video games with the 2600, then struggled to recreate that sort of success ever again. It certainly wasn’t through lack of trying on the tech front, though.

The Atari Lynx was one of their more impressive efforts, providing the first 16-bit handheld gaming platform with a backlit colour screen, hardware scaling and distortion. It even had a decent selection of games for it, but as was always the case with post-2600 Atari, its marketing was a complete disaster and as such the system remains largely forgotten by most gaming enthusiasts today.

Except for the folks behind the Evercade, of course, who have brought us not one but two collections of Atari Lynx titles for the diminutive retro gaming platform. So let’s take a look at one of the games from the Atari Lynx Collection 1 cartridge and see whether or not these forgotten titles have anything to offer to the modern gamer! 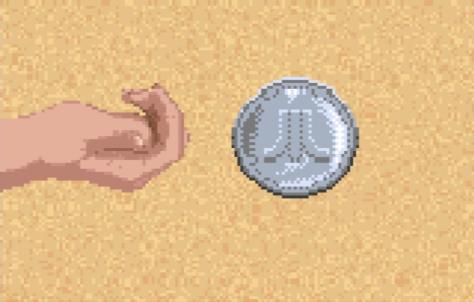 Malibu Bikini Volleyball was developed by Hand Made Software and released as a Lynx exclusive in 1993 through Atari. Today, the rights for the game are in the hands of Songbird Productions, a developer who has been making new software for the Lynx since the early 2000’s — and who has been doing a sterling job in republishing a lot of forgotten Atari titles across a variety of platforms for enthusiasts. In fact, the entire Atari Lynx Collection 1 cartridge consists of Songbird titles, covering both games from back in the day and more recent games for the platform, developed long after its fifteen minutes of fame on the market.

Malibu Bikini Volleyball was one of several titles Hand Made developed for Atari after their first game, Awesome Golf — also a Lynx exclusive — saw a positive critical reception, and is one of their later titles. At heart, it’s a simple sports game that allows between one and four players to play games of two-on-two beach volleyball, either in a one-off “friendly” format or as part of a tournament. Given the nature of the Evercade at the time of writing, only the single-player mode is available, however; if you want the full four-player experience you’ll need to get together four Atari Lynxes, the requisite ComLynx cables, four copies of the game and more AA batteries than you can possibly imagine. 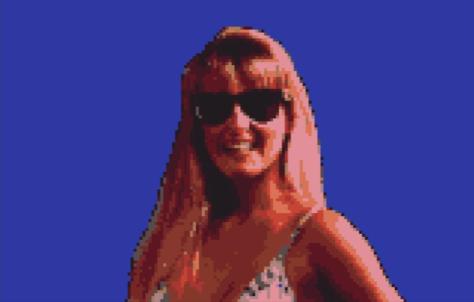 After firing up the game and enjoying a distinctly low-definition rendition of model Karen Isely (who I assume is not the same Karen Isely as the rather tedious-sounding business consultant who comes up when Googling that name, but I guess you never know) you’re invited to set your options. And, like many sports games from the ’90s, you’re presented with a decent array of options with which to customise your experience. You can play a male or female character, input up to two initials to identify yourself and set various options for the next game you play, including the overall time limit, score to play until, whether or not there is any wind, overall game speed and whether or not the game shows markers depicting where the ball will land.

When starting a new game as a single player, you’re offered the opportunity to play one-off friendly games at four different skill levels, or engage in a four-round, single-elimination tournament. In a nice touch, the game reflects the difference between these two modes with the background during the match; when playing a friendly match, there’s a rather pleasant beach scene behind you, whereas tournament play is accompanied by stands filled with beach bodies of both genders cheering you on. 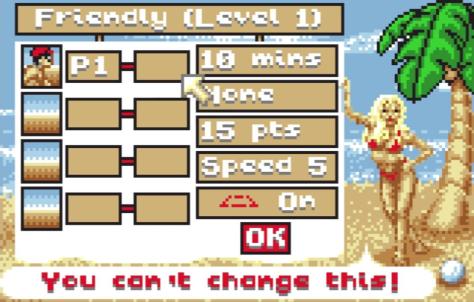 Once play begins, you remain in exclusive control of your character; this means in single-player mode you’re somewhat at the mercy of your computer-controlled teammate. Thankfully for the most part they’re not a complete idiot and will sensibly do things like pass the ball to you or set it up for a spike according to how things are unfolding, but they’re by no means flawless. Volleyball is a team game, though; if you suspect your counterpart isn’t in a good position to save the situation — or indeed if they appear to be contemplating their own mortality rather than running for the ball — you can usually get there in time to sort things out.

Controls are kept pretty simplistic throughout. Pressing either of the Lynx’s buttons passes the ball to your opponent or sets it up for a spike depending on context; if you were the first to hit the ball, the two buttons allow you to either perform a simple return across the net or a powerful spike shot when your partner hits it back to you. And, as you might expect from a game like this, pressing the directional pad in a direction while hitting the ball directs where it will end up. 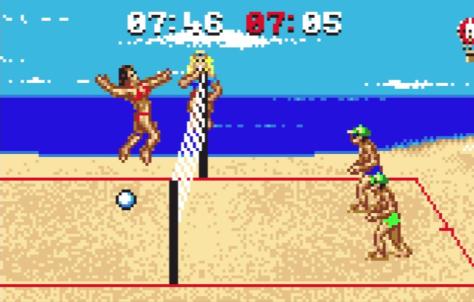 The big challenge in Malibu Bikini Volleyball is timing, since you’ll likely find you need to hit the buttons a little earlier than you might expect. This isn’t like certain arcade-style tennis games where you can just hammer the button and hope, either; if you trigger an animation at the wrong time — or in the wrong place on the court — you’ll miss the ball and either concede your serve or a point to your opponents. Thankfully, the game helps you with the timing by causing the ball to flash when it’s the perfect time to hit the button. Playing on the slower speeds and watching out for this is a good way to practice; once you’ve got it nailed you can bump up the speed and really show your skills.

Positioning can be a little finicky; it’s worth keeping the “landing marker” active most of the time, since being even a pixel out of place when attempting to hit the ball can result in you whiffing it completely. That might sound like more of a pain than it is; bear in mind that the Lynx’s pixels are pretty gigantic, especially if you’re playing on a television, so after a while you’ll get used to where you need to position your player’s feet in order to hit it correctly every time. 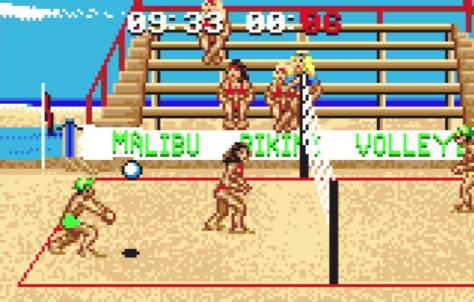 Once you get your head around the basic mechanics, Malibu Bikini Volleyball is a simple but fun arcade-style sports game. There’s not a lot of depth to what’s going on, but each game can be surprisingly varied as a result of the different shots that each side takes as well as optional variables like the wind. The four levels of difficulty and the tournament mode add a certain amount of longevity, but the Evercade version in particular does suffer a little from the lack of multiplayer — this would be great fun with friends.

What’s worth bearing in mind, though, is that this game came out in an age where a lot of handheld games — particularly on less popular platforms such as the Lynx — were much more distinct from computer and console games than they are now. Specifically, handheld titles from this era were, with a few notable exceptions, mostly designed for quick, arcade-style play sessions rather than to engage their players for large chunks of time at once. 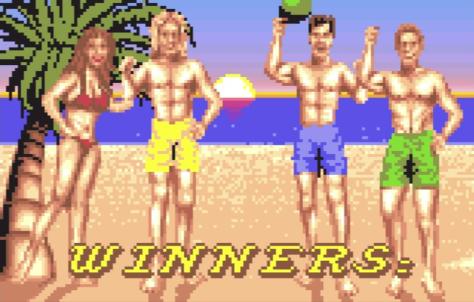 And if you keep that in mind, Malibu Bikini Volleyball provides a perfectly enjoyable experience for a few minutes at a time. It’s not something you’ll likely spend hour after hour with — but you may well find that it’s something you come back to on more than one occasion… if only to hear the excellent music the Lynx’s trusty sound chip puts out during your play sessions — or indeed to hear the sultry digitised tones of Carrie Tahquechi, voice of Tempest 2000, telling you how totally rad you are, dude.