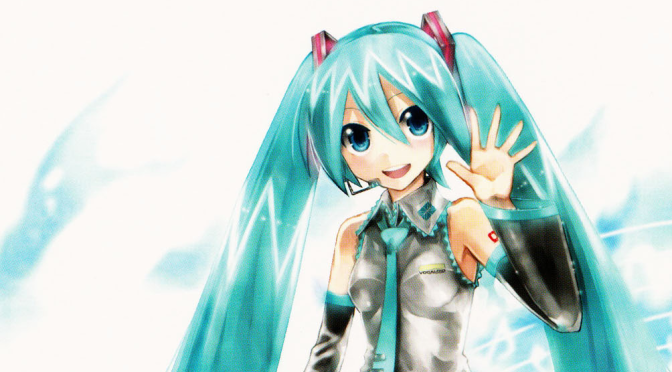 With this week marking the release of a new Hatsune Miku game on Nintendo Switch — and it apparently dominating the sales charts somewhat — I thought it was high time we celebrated the world’s most famous Vocaloid.

Miku is an impressive cultural icon in that she transcends context and medium; she’s a genuine superstar who crosses boundaries, brings people together and inspires a considerable amount of passion from creators and fans alike.

Where did she come from? How did this phenomenon come about? Let’s take a closer look.

For the uninitiated, Hatsune Miku is actually the name of a piece of software: specifically, it’s a voice bank for a piece of singing voice synthesis software known as Vocaloid. This is a rather nifty bit of kit that allows you to compose melodies using a piano roll-style interface and attach lyrics to each note, thereby creating a completely virtual singer.

The underlying technology behind Vocaloid was originally developed as a research project at the Pompeu Fabra University in Barcelona, Spain, but subsequently expanded into a full commercial product with the backing of Yamaha.

Following Vocaloid’s release in 2004, various voice banks were developed and put out as purchasable add-ons, allowing for greater flexibility and simulation of a wider variety of voices. The first two of these — female vocalist MEIKO and male singer KAITO — were developed by Yamaha and released by Crypton Future Media in 2004 and 2006 respectively; Hatsune Miku, meanwhile, was the first to be fully developed by Crypton Future Media, and appeared for the first time in 2007.

Miku’s voice is sampled from Japanese voice actress Saki Fujita, and her name translates to “the first sound of the future” — a reference to the fact that she was the first Vocaloid voicebank developed in-house by Crypton, and the first in what would become known as the “Character Vocal Series”. Each of these characters would be designed with a particular concept in mind for both their vocal direction and their visual mascot, designed around the concept of moe anthropomorphism.

Miku’s original image was the work of manga artist Kei Garou, aka KEI. His only direction was that Miku was an android and that she should have a colour scheme based around the signature colour of turquoise. He chose to theme her overall appearance around the look and feel of the Vocaloid software, with the “bars” evident around her overall design making direct reference to specific parts of the program’s user interface.

Following KEI’s initial design of the character, Crypton publicly posted a personal data sheet for Miku, which informs us that her birthday is August 31, she is perpetually 16 years old, she is 158 cm tall and weighs 42 kg. She is particularly recommended for pop, rock, dance, house, techno and crossover songs at a tempo range of 70-150bpm, and has a recommended vocal range of roughly A3-E5, putting her in mezzo-soprano territory if you want to get technical about it.

Interestingly, Crypton deliberately chose to keep details about Miku’s personality vague; her data sheet contained only the above physical and technical specifications, leaving creators free to determine exactly how they wanted to portray Miku in their own work. This, in turn, has led to a wide variety of interpretations of the character covering an extremely diverse range of musical styles — and, strictly speaking, none of them are really “canonical”.

Indeed, Miku’s character design is licensed under the Creative Commons BY-NC terms; that means, strictly speaking, if you use Miku the character in your own work, you must credit the copyright holder — Crypton in this case, rather than KEI — and you must only do so on a non-commercial basis. That said, the exact definition of “non-commercial” under Creative Commons has been the subject of some debate since 2009, so one should not be surprised to see creators selling Miku-themed work of various descriptions.

Even KEI’s own manga adaptation of Miku, known as Maker Hikoushiki Hatsune Mix or simply Unofficial Hatsune Mix, doesn’t feature a single interpretation of the character. Instead, it explores a variety of different storytelling tropes, ranging from giant-sized battles to slice-of-life tales — and despite the original visual appearance of Miku as a character being the work of KEI, the entire manga is regarded as an unofficial spin-off.

Hatsune Miku’s cultural impact and incredible growth since her original launch cannot be understated. We’re talking about what was originally a piece of box art for a piece of music synthesis software becoming an honest-to-goodness virtual idol; one with more than a hundred thousand songs to her name at this point, and one that has even managed to make “live” appearances on stage at concerts using projection onto specially coated glass screens. Indeed, at the time of writing, she has been confirmed to appear at the Coachella music festival in April of 2020, showing that her success is not just a Japanese thing — and has not been for a long time now.

Most relevantly for us here on MoeGamer, Miku has put in frequent appearances in gaming-related media. She has a particular attachment to Sega; not only has Sega published the various Project Diva rhythm games that are based around Miku and various other Vocaloid characters, but Miku and Miku-related outfits and accessories have also appeared in games such as Yakuza 5, Phantasy Star Portable 2, Phantasy Star Online 2 and Persona 4: Dancing All Night.

The Project Diva games in particular are glorious celebrations of “Miku culture”; not only do they feature large collections of some of Miku’s greatest hits to tap along to — and some of the most challenging note charts in the business — they are also complemented by a varied gallery of fanart on the loading screens, as well as opportunities for fans to actually interact with Miku and her friends in various situations. If you’re a Miku fan, you owe it to yourself to check out at least one of these.

And, conveniently, at the time of writing, the latest game in the series, Project DIVA MegaMix, has just hit Japanese Switches, with an official Western release to follow sometime later in 2020. The Switch is region-free, though, and the game’s use of text is minimal, making it one of the safest, easiest “imports” you’ll ever download from the Japanese eShop.

Want to know more about MegaMix specifically? Our friend Matt over at Digitally Downloaded has the full scoop, so when you’re done here, go pay him a visit and admire one man’s admirable dedication to his one and only waifu… and to the genuinely excellent games in which she appears.