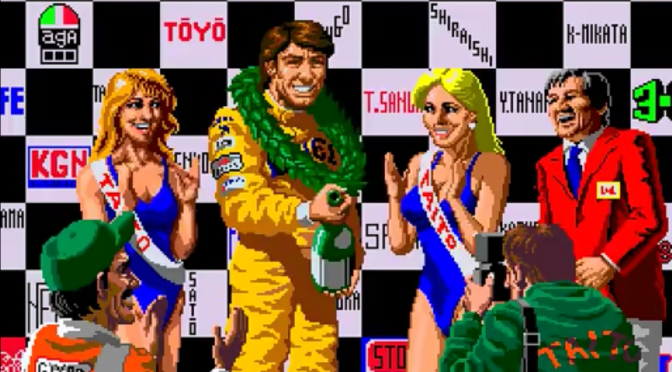 Ah yes, Continental Circus, the game which UK magazine Sinclair User declared “Cock-Up of the Year” in 1988 for the assumption that its peculiar title had rather prominently misspelled “Circuit”, only for it to become apparent sometime later that this was, in fact, deliberate.

The term “Circus” has been used over the years in both French and Japanese motorsports, and indeed there was even a 1972 French documentary called Continental Circus, which Taito’s 1987 arcade racer rather cheekily lifted a voice sample from to mark the beginning of each race. Although you can see how Sinclair User might have got confused; many of the original arcade machines for Continental Circus were actually branded with the title “Continental Circuit”.

The game itself is a “vanishing point” racer that attempts to build on what Namco had been doing with its Pole Position and Final Lap series since 1982. And, despite appearing superficially similar to those classic titles, it remains, to this day, a unique take on the racing genre with some very interesting ideas. 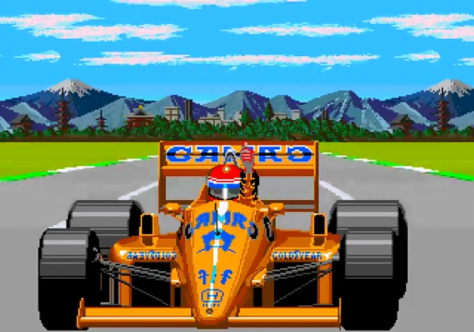 In Continental Circus, you are a Formula One driver. Specifically, given your car’s livery, you are either a slightly bastardised version of late-’80s Ayrton Senna or (more likely) an equally bastardised incarnation of Satoru Nakajima. I say “bastardised” because, as we frequently see in Japanese popular media even today, copyright issues prevented Taito from using real-world sponsors on the in-game car, meaning Ayrtoru Nakanna (or is it Satton Senajima?) is, for one season only, prominently sponsored by “Camao” cigarettes, “Goldyear” tyres and, seemingly, through an apparent warp in the time-space continuum, Facebook.

Anyway. Your job, as said F1 driver, is to proceed through a series of races in which there are 99 other people attempting to take the top spot. Unusually for the genre, you’re not competing against a small field of 8-12 cars in a single race at a time, your overall rank is persistent across your entire playthrough, and each race can only be cleared by reaching or exceeding a qualifying rank by the end of three laps. And just to make things that little bit more difficult, you’re on the clock, too. And just to make things extra frustrating, you can continue and retry races as many times as you like… except in the grand final, which you only get one attempt at, regardless of how many credits you fed in. Joy!

Continental Circus distinguishes itself from its contemporaries by taking a distinctly more “sim” approach to its gameplay. Don’t get me wrong, we’re still talking about a “vanishing point” racer where you simply move left and right across the road rather than actually turning in three dimensions here, but it’s the additional elements added to the basic gameplay that make things interesting.

For starters, unlike in Namco’s Pole Position, where apparently every vehicle was equipped with a self-destruct mechanism that triggered the moment a gnat breathed anywhere near the bodywork, in Continental Circus you can bump into something without immediately exploding into a ball of flames. Instead, on that first bump, your car starts smoking and eventually catches fire (accompanied by a large, prominent on-screen warning of “IMPENDING EXPLOSION”), then it explodes into a ball of flames. It also explodes into a ball of flames if you bump into something a second time while smoking or burning, but, crucially, you can put the fire out and defy your fiery fate by pulling into the pits.

The pits also become relevant during races where Weather Happens. Occasionally, you’ll encounter a very sudden downpour, at which point your car will become much more difficult to control unless you pit to change your tyres. You can choose not to do this if you wish, but the persistent honking from your car’s warning system is more than enough encouragement to do so — and let’s face it, you’re probably also on fire anyway, so you may as well get your tyres changed while you take appropriately preventative measures to deal with the impending “explode into a ball of flames” situation.

On top of all this, your car can blow up if you go too fast, and you can spin out if you steer too hard around a corner or at too low a speed. All in all, it’s hard to think of a racing game on the “arcade” side of things that appears to genuinely hate its players as much as Continental Circus does. And yet it’s the fact you feel like you’re constantly battling against this never-ending stream of hazards and mishaps that makes the game so enjoyable.

Presentation-wise, the game looks pretty nice given its age. It’s more technically advanced than earlier racers in that it incorporates hills as well as corners, and the 3D effect on the road is rather convincing, with some surprisingly tight corners to negotiate at times. The varied 2D backdrops give a pleasing sense of variety to the different stages when coupled with the differently coloured stripy ground textures either side of the road — and there’s even a stage that makes an honest to goodness attempt at an overlapping “bridge” segment of track, which is a nice touch.

There are lots of nice little hints of personality to the game, too; many Formula One games over the years have been rather dry in this regard, but Continental Circus gives a bit of character to its various races by having visible pit crews that prepare your car before a race and fix things up in the pit, a different swimsuit-clad race queen for each event (who looks genuinely pissed off at you if you fail to qualify by the end of the three laps) and a little bit of digitised speech, including the aforementioned quote from its namesake documentary. There’s no music during gameplay, though between races each stage has its own catchy little jingle courtesy of Taito’s legendary sound team Zuntata, and to be honest with so much going on in each event some in-game music would probably be distracting.

It’s fair to say that Continental Circus is a bit of an acquired taste, because it’s a lot more complex and challenging than many of its contemporaries. But that’s what makes it an enormously satisfying game to play, and an entry in Taito’s back catalogue that I’m rather fond of. Even taking into account the frequency with which I explode into a ball of flames, much to the chagrin of race queens all over the world.

IMPENDING EXPLOSION. Megumin would be proud.