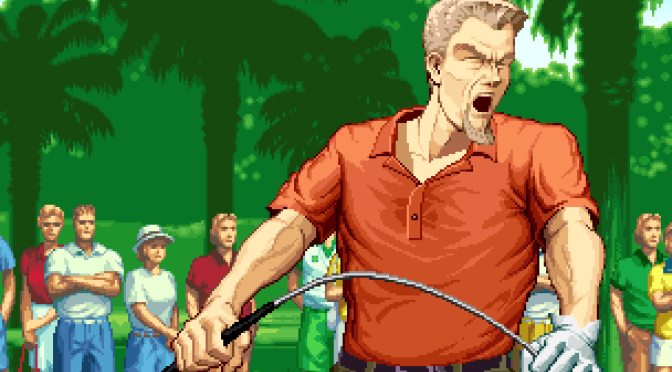 It’s honestly kind of surprising how many times the sport of golf has been adapted to the arcade format.

On the surface, you wouldn’t think the two things are particularly compatible; golf is a terribly sedate, polite sort of sport that takes all day to play, whereas arcade games are typically noisy, spectacular and, in many cases, over and done with in five minutes or less.

And yet that hasn’t stopped a number of developers trying their best to adapt it to a quarter-munching format, with one of the very best examples being Nazca’s Neo Turf Masters for Neo Geo, a game which has had a bit of a resurgence recently thanks to numerous ports to PC and console. 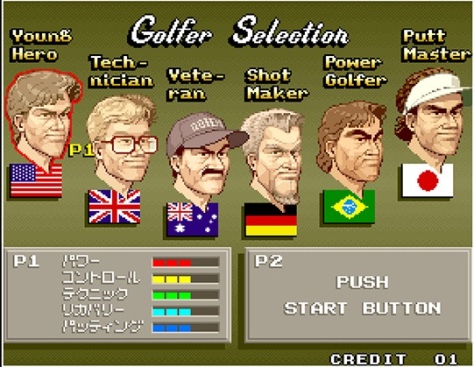 Neo Turf Masters doesn’t really tinker with the core formula of golf all that much. What it does do, however, is streamline the entire process of aiming and taking a shot, as well as structure the whole experience a little differently from your conventional round of golf to encourage 1) credit-feeding and 2) attempts to prove your skill through one-credit clears. Sounds like an arcade game to me.

In Neo Turf Masters, you take on the role of one of six different golfers — all adult males, no Everybody’s Golf-style inclusivity here — and challenge one of four different courses themes around the US, Japan, Australia and Germany. Each course has its own layout, visual style and musical theme, while each golfer has his own set of attributes that give him appropriate strengths and weaknesses in various situations. 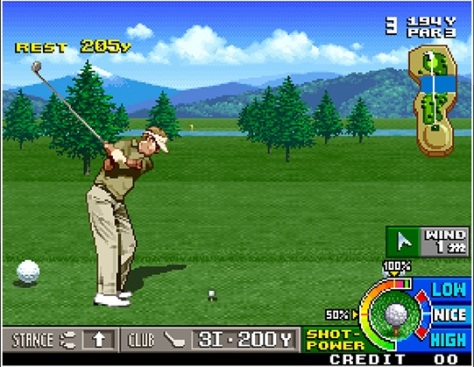 Once you hit the links, you’re presented with a three-dimensional view from behind your golfer as well as an overhead map of the entire hole. The 3D view actually isn’t especially useful for much other than determining whether or not your shot is likely to hit a tree, since the Neo Geo hardware the game is based on wasn’t exactly built for detailed polygonal 3D. Instead, you’ll find most of your attention devoted to the overhead view, where you can aim your shot.

Like most modern golf games, Neo Turf Masters provides you with a helpful readout that informs you how many yards the ball will travel if you hit it with your current club under perfect conditions. Unlike modern golf games, however, the aim mark for your shot doesn’t take this range into account, so you have to use this purely to set direction and estimate the distance the ball is likely to travel based on the map, the number of yards remaining until the hole and other information such as the wind speed and direction. 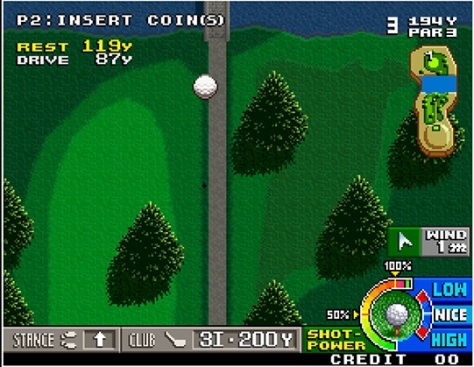 Your swing itself is a twist on the usual three-tap affair. Your first press of the action button starts the meter, the second sets the power and the third sets the height of your shot rather than the more common use for hook, slice and accuracy. This allows you to take advantage of things like topspin and backspin as part of the shot, and you can also manually apply draw or fade to your shot using two other buttons prior to making your swing if you need to curve the ball around obstacles.

The main way Neo Turf Masters streamlines the experience is by pretty much setting up your shot for you every time. It automatically picks the optimum club and points you at the hole, and in most cases all you need to do is twat the ball appropriately, perhaps taking wind into account. Where things get interesting — and challenging — is if you mess something up and have to get yourself out of the rough or a bunker or out from behind an awkwardly positioned tree. 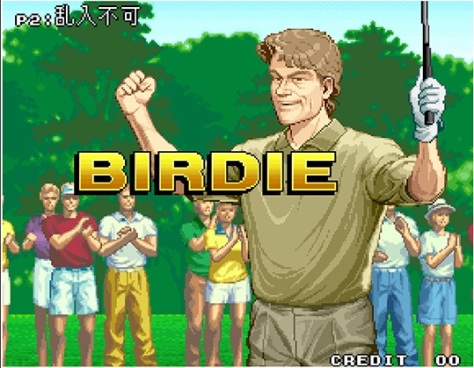 The arcade structure comes from Neo Turf Masters’ curious implementation of “lives”. A single credit allows you to play a certain number of holes according to the game’s settings, but scoring under par can provide you with bonus holes. Conversely, scoring over par costs you more than one hole, so your round will be over very quickly if you hit a bogey or worse — and even if you consistently score par, you’ll still run out of holes before long, since a hole in par doesn’t net you any bonuses.

This structure, coupled with the tricky design of the courses and the rather variable wind speed and direction, makes Neo Turf Masters a very challenging game indeed. It’s not at all uncommon to find yourself out of holes before you’ve got even a quarter of the way around the whole course, and for your first few playthroughs at the very least, you’re probably going to have to credit-feed in order to see all 18 holes. Once you learn the courses, however, things become a little easier — though not by much — and one-credit clears become a possibility. It’s strange to consider this concept — typically associated with shoot ’em ups — in relation to a golf game, but, well, that’s the Neo Geo way. 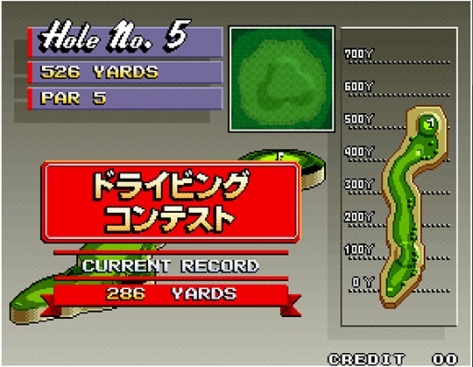 So Neo Turf Masters certainly plays like an arcade game, but it also looks, sounds and feels like an arcade game, too. Your entire round is accompanied by cheesy but catchy synthesised music, with a unique theme for each course, and exaggerated Engrish voiceovers from announcer “Nancy” (I suspect that is not her real name) and the golfers themselves (who all sound suspiciously similar to one another) only add to the appeal. It’s fair to say that some of Neo Turf Masters’ lines have become iconic memes in their own right thanks to their exuberant but clumsy delivery; I defy you not to want to shout “On the gleen!” in every other golf game you play after a bit of time with Neo Turf Masters. Or indeed “OH NO!!” every time some mild inconvenience upsets your day slightly.

In terms of content, four courses may not sound like a lot but it’s comparable to a lot of other modern golf games, and with the arcade structure it’ll take you quite some time before you’re able to clear an entire round without credit-feeding. There’s also a two-player versus mode, though this is often over quite quickly unless you stock up on credits beforehand thanks to the fact it also uses the “lives” system of limited holes. It perhaps would have been nice to have some modes in the home ports that aren’t throttled by the arcade structure, but at the same time, learning to deal with that is part of what makes Neo Turf Masters unique in a genre that hasn’t changed all that much over the years. 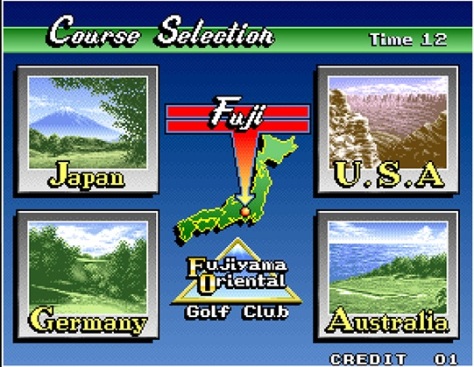 Golf may not be your first thought when you’re looking for a “quick hit” game with which to while away a few minutes. But Neo Turf Masters certainly provides on that front — and moreover demonstrates how one of the world’s most sedate sports can actually make for surprisingly fast-paced, intricately skilled arcade action.

This is Nancy’s report.