The PlayStation Portable was no stranger to games of this type, of course, what with the excellent Lumines being a launch title for the system and a wide variety of other brainteasers making solid appearances on the platform over the subsequent years.

One of the most interesting and unusual titles on the platform is 2006’s Gunpey, actually the latest installment in a series that got its start on the Japan-only WonderSwan system. 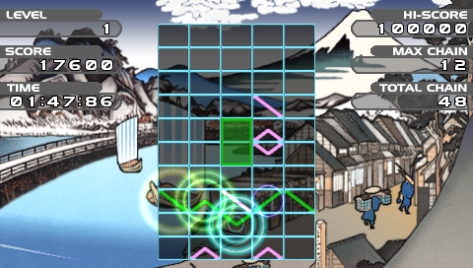 If that name sounds familiar, it’s no coincidence; it’s named in honour of the late, legendary designer Gunpei Yokoi, creator of the one and only Game Boy, the ill-fated Virtual Boy and Bandai’s WonderSwan — the latter being his last project before his untimely death in 1997.

Gunpey’s original release was a game designed specifically to be the WonderSwan’s answer to Tetris, a game which had become inextricably associated with the Game Boy despite coming out on pretty much every platform imaginable in both official and unofficial forms. It launched alongside the system and reviewed well, particularly in Japan, though it failed to make quite the same cultural impact as Alexey Pajitnov’s classic. It did, however, do well enough to spawn a number of Japan-only sequels, including a PlayStation port of the Wonderswan original, a launch title for the WonderSwan’s colour follow-up and a cellphone version.

In 2006, Gunpey received two new versions: one for Nintendo DS and one for PSP. Both are regarded as part of a subseries called Gunpey Rebirth, and indeed were branded this way in Japan; since these were the first installments in the series to get a Western release, however, they were simply called Gunpey DS and Gunpey respectively in North America and Europe. 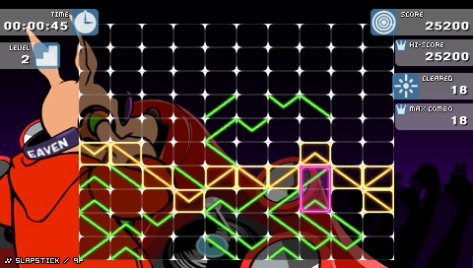 Gunpey’s gameplay revolves around creating lines across a 5×10 grid that forms the play area. Rather than being a Tetris-style falling block puzzle, however, in Gunpey the play area scrolls downwards a row at a time, with each new row revealing one or more pieces, each of which is one of four shapes: a forward slash (/), a backward slash (\), a caret (^) or an inverted caret (v) shape.

Your control over Gunpey’s play area is deliberately restrictive; you control a cursor that covers two tiles of the grid stacked on top of each other vertically, and by pressing a button you can swap these two tiles. In this way, you can either “move” pieces vertically by switching them with blank spaces or swap them with other marked tiles — but there’s no way to move pieces horizontally. To create a line and score points, the pieces must form an unbroken line from the left edge to the right edge; additional points can be scored by “branching” this line (so long as both branches reach the other side) or creating multiple complete lines simultaneously, and there’s a few seconds between creating a line and it disappearing where you can attempt to slot in a few extra pieces for some bonus points.

It’s a very simple idea. In many ways, it pays tribute to Yokoi’s design philosophy of “lateral thinking with withered technology” — an attitude which saw the relatively underpowered Game Boy become a market leader compared to its more technically impressive peers. In Gunpey, literally all you’re doing is sliding four different shapes around on a grid — about as simple as gaming gets — but the myriad ways in which those shapes can be combined makes for an ever-changing experience. 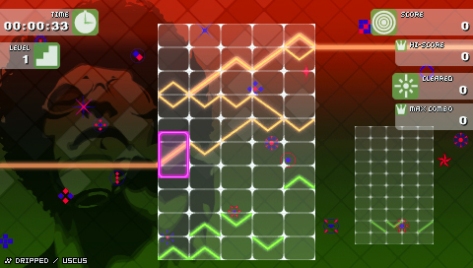 There’s the added pressure of time, too; because the game sees unused pieces constantly moving towards the top of the screen as the grid scrolls ever downwards, you regularly need to “rescue” stray pieces from getting too high and hopefully incorporate them into a line in the process. In this way, the game has a considerably more frantic feel at times than some other puzzlers, particularly once the speed ramps up a bit.

The PSP version of Gunpey, which we’re primarily concerned with today, is the work of Q Entertainment, creators of Lumines, and that fact is very much apparent in its presentation, which is handled rather similarly to its stablemate. Gameplay is accompanied by interactive electronic music, with everything you do creating sounds and musical stings that build on the basic beat and backing of the songs, and each song is complemented by a distinct visual “skin” that features a different colour scheme, sound scheme, tempo and animated backdrop. Much like in Lumines, your progression is primarily measured through how many “skins” you survive through in a single playthrough, though there are also options to play games that are confined to just one or two favourite skins if you prefer, too.

Also like Lumines, this is not a quick puzzle game to grab while you’re waiting for the kettle to boil or a bus to arrive. This is a game you need to sit down and concentrate on; once you get the hang of the base mechanics, a single playthrough can easily last half an hour or more, with the psychedelic backdrops and pulsing music making the whole thing an enjoyably immersive, almost meditative experience, particularly if played on headphones.

Make no mistake, though; this isn’t a game that goes on for so long because it’s too easy. The varied tempo of the skins’ songs give a distinct feel to each stage, and those with a faster tempo are extremely frantic, requiring lightning-fast strategic thinking as you prioritise which pieces to try and focus on, but these are generally followed up by something a bit more sedate to calm you down again rather than presenting you with relentless panic after a certain point.

Many of the stages’ animated backdrops seem specifically designed to distract you as much as possible, too; this isn’t to say that they’re obtrusive, simply that the striking visual design of many of them makes it hard not to want to admire the care and attention that has clearly gone into them. But you don’t have time to do that; there are little lines to shift around in a flailing panic! 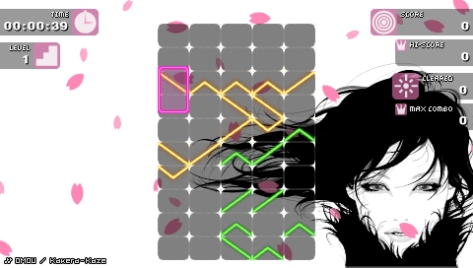 Ultimately Gunpey succeeds as a puzzle game because its core mechanics are so simple and easy to understand; its challenge factor comes from the sheer amount of work you have to do to stay on top of things once the screen gets busy — though the PSP version does take a little of the pressure off through the addition of an optional mode where pieces above a line you’ve created drop down after the line disappears.

It’s an enjoyable time, though, and as previously noted the wonderfully varied soundtrack and hypnotic background animations make for an immersive, addictive experience that will have whiled away a good few hours before you realise it. Stick on a pair of headphones and lose yourself in this strange, psychedelic world for an hour or two; you won’t regret it.