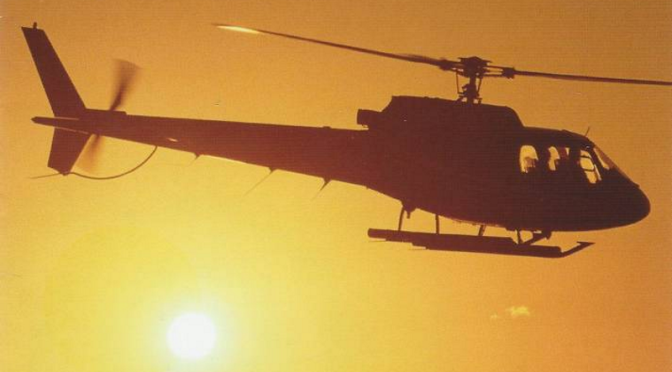 One of the most charming things about D3 Publisher’s Simple Series is its straightforward naming convention, which brings to mind the good old days of Atari 2600 games called imaginative things like “Combat”, “Golf” and “Dodge ‘Em”.

As such, with a game called The Helicopter — or the even more literal Radio Helicopter, as it was known in Europe — you pretty much know what you’re getting into before you start.

What you might not know, however, is that this simplistic-sounding, low-budget game is actually a ton of fun.

In Radio Helicopter, as we’ll refer to it from hereon, you take on the role of a young elementary school boy who has received a remote-controlled helicopter for his birthday to replace one he broke.

Over the course of a series of missions split across three different environments, it’s your job to fly your helicopter and complete various missions, earn money to upgrade it (or even replace it with more advanced models, you ungrateful little brat) and ultimately become the sort of beloved child who helps out everyone in the neighbourhood with his toys that you’d typically find in a 1950s comic.

The first few levels are set in and around your house, and consist of relatively simple activities. After this, the action moves to the local shopping district, where various locals need assistance with a variety of tasks. Finally, you take your prized helicopter to school to help out some teachers with things they should really be doing themselves. After this, there are a series of bonus levels in which you have to photograph ghosts and prove your piloting skills by collecting a series of awkwardly positioned stars from around an obstacle course.

Radio Helicopter is split into two main components: flying around the various environments freely in order to track down the star marks that represent the missions, and the missions themselves. There’s little reason or incentive to explore a great deal when you’re not on a mission as there aren’t any hidden goodies or anything, though it does give the missions a nice feeling of “context” as you fly between them after someone gives you only the vaguest directions as to where to go next.

The missions, meanwhile, take place in a small area of the environments, and have a variety of different objectives to accomplish before you either run out of battery or take too much damage. Sometimes you’ll simply be landing on things; at others you’ll be retrieving objects with a claw attached to the bottom of your helicopter, blowing things around with your rotor blades or scaring away stray cats with a water gun. Most of the objectives are pretty mundane, but the enjoyment comes from the realistic handling of the helicopter, with the DualShock 2 essentially being used in the same way as a real remote control would be: one stick controlling forward and back movement and rotation, the other controlling ascent, descent and sideways motion. 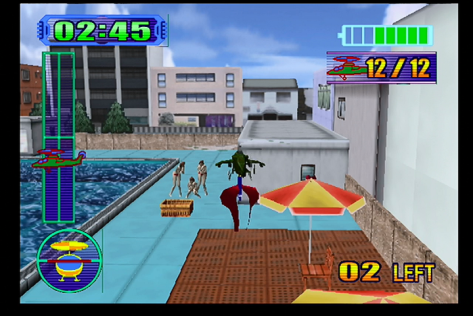 There’s a great deal of personality injected into the experience by the fact that every mission is presented to you by a different character in a brief dialogue sequence, rather than you simply selecting challenges from a menu. In this way, despite the whole thing not really having a coherent “story” as such, you’re made to feel like you inhabit the game world, and that the creators have tried to do more than simply create a dry, boring simulation. (There’s a place for dry, boring simulations, of course, but I would tend to argue that games consoles are probably not that place.)

By the end of the game, you don’t really feel like a “hero” as such because this isn’t that sort of game — although, that said, one mission does have you delivering gas masks to people trapped in their apartments as their building is ablaze, while another later mission sees you battling the arsonist who set the fire’s fleet of black helicopters — but it does provide a pleasingly warm feeling of having accomplished something, and of having made these virtual people happy. Even when you let the arsonist go after you defeat him rather than calling the police; I mean, come on, he gives you his awesome scarf and everything.

The whole game is charmingly innocent, allowing the player to fully inhabit the role of a young child out playing with their birthday present, and this lovely feeling of childish innocence is reflected throughout, even in the scene prior to the mission at the local swimming pool, where some naughty crows have stolen some busty girls’ bikini tops. Upon successfully retrieving the missing items of clothing, one of the girls (still topless, albeit covering the good bits) offers you a kiss as a reward, but you express a desire to be compensated with money rather than carnal pleasures. You are a young boy, after all, and, at that age, girls are, of course, icky.

Radio Helicopter is, unsurprisingly for a low-budget and budget-priced release during the busy PlayStation 2 era, never going to go down as a “classic” or anything. But it is a perfect example of the philosophy behind the Simple Series as a whole: to allow developers to take simple ideas and explore them freely, perhaps creating highly enjoyable games in the process.

It’s a straightforward, fun and, yes, simple game that can be picked up and played by pretty much anyone, assuming they have a basic understanding of how a remote control helicopter works. It’s not overly taxing or challenging either, making it a good game for kids — or for those who simply want to recapture their youth — but there’s enough substance to it to keep you busy for a good few hours at least.

In other words, it’s a great addition to your PlayStation 2 collection, particularly if you’re in the mood for something of a palate-cleanser between more substantial games!