One of my favorite things about Japanese role-playing games is their focus on camaraderie and friendship.

In fact, you can extend this outwards to a large amount of Japanese media in general — take a look at manga and anime and you’ll find a very similar situation.

The concept of nakama, or the trope of “true companions”, is very commonly seen — party members don’t necessarily always get along with one another, but they can count on one another and trust each other to do the right thing in a pinch.

The Persona series takes this concept considerably further than most other JRPGs by emphasizing not only the bonds between party members, but also the bonds between the protagonist and the people whose lives he passes through fleetingly. 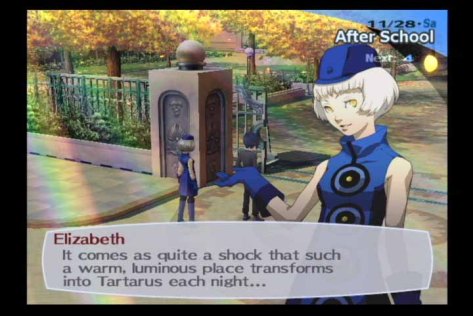 Early entries in the Persona series emphasized the bonds of cooperation and good communication through mechanics — party members all had very specific “roles” to fulfil both in combat and in the narrative — but it wasn’t until 2006′s Persona 3 that we saw the series truly find its feet with the blend of social simulation, visual novel and dungeon-crawling JRPG that it is known for today.

If you have never had the considerable pleasure of playing Persona 3, here’s a rundown of how it works: every night at midnight, the “Dark Hour” happens, causing normal human beings to transmogrify into coffins and be completely unaware of what is going on.

As the full moon approaches, strange creatures known as “Shadows” emerge from a gigantic tower known as Tartarus and prey on anyone who, for whatever reason, isn’t trapped inside a coffin.

Certain special individuals — those with “the potential” — have the capability to summon a “Persona,” a being that lives inside their psyche and which helps them overcome physical and mental hardships. Most people only have a single Persona, but our hero has the capability to summon multiple Personas, fuse them together and make use of a much wider array of abilities than most other Persona-users.

So far so JRPG, you might think, but here’s where it gets interesting: every Persona has a corresponding Arcana from the Tarot deck attached to them, and draws strength from the protagonist’s bonds with real people who correspond to that Arcana.

Conveniently, scattered around the game’s fictional Japanese town are just enough characters to correspond to each of the Arcana, each of whom has their own story to tell. Some of these characters are members of the player’s party, while others are incidental, secondary characters whom he just happens to come across in various circumstances. 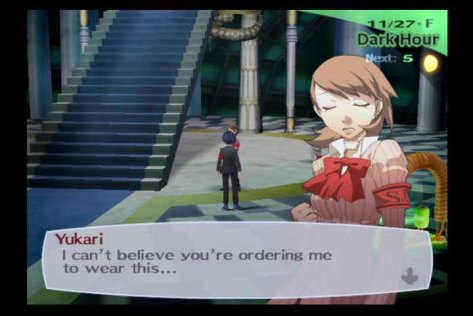 All of them have some sort of “issue” to overcome or come to terms with — a full narrative arc, to put it another way — and with the help of the protagonist are able to do so, thereby deepening the bonds between them and, consequently, the amount of power a new Persona of the corresponding Arcana can be infused with.

Just to make matters slightly more complicated, if the protagonist has an equipped Persona of a corresponding Arcana to the person he is hanging out with, the two will get along better and see more rapid development of their relationship.

This is by far the best thing about Persona 3 and, for that matter, its sequel. (Editor’s Note: And, indeed, the very recently released Persona 5.) Since the game is so long — you’re looking at somewhere in the region of 100 hours to see the story through from beginning to end — you spend a lot of time with these characters and really get to know them well as your “Social Link” with them levels up.

Their struggles and inner turmoil are not the usual sort of melodramatic angst you get in more traditional Japanese role-playing games — these are people trying to deal with very “human” problems.

There’s a little girl who is upset that her parents are divorcing and thinks it’s her fault; there’s a young man with a terminal illness who doesn’t want to die; there’s a classmate hatching increasingly elaborate plans to ask his teacher out; there’s an online game player who is desperately lonely. All of these characters’ side stories are crafted with the same level of care and attention as the leading ensemble cast and, in the best tradition of visual novels, often come to terms with their issues in their own way rather than through the protagonist being some sort of magic cure-all who heals all wounds by virtue of his mere presence.

Friendship isn’t always easy, in other words, but it makes both of you stronger. By the end of the game, you feel like you’re not only fighting for yourself, but for everyone whose lives you have touched over the course of the in-game year. And indeed the game’s final moments very much play on this feeling.

Oddly enough, it’s the more traditional role-playing game aspects of Persona 3 that are arguably the least compelling part of the entire experience. This isn’t to say they’re bad, of course. In fact, the game’s turn-based combat system, which focuses on knocking down enemies by hitting their weak points and then unleashing a party-wide “All-Out Attack,” remains one of my favorite JRPG battle systems of all time. But it’s also the least important part of your time with Persona 3. Grinding levels takes a back seat to managing your time after school carefully so you can build up as many relationships with people as possible.

As a rule, I can tell if the hours I’ve spent playing a role-playing game have been worthwhile by whether or not I feel like I “miss” the characters after the experience is over.

In the case of both Persona 3 and its sequel, I was left feeling peculiarly hollow and empty inside after the credits rolled, not only because I no longer got to hang out with and fight alongside the main party members, but because I was also leaving all of my “Social Links” behind. 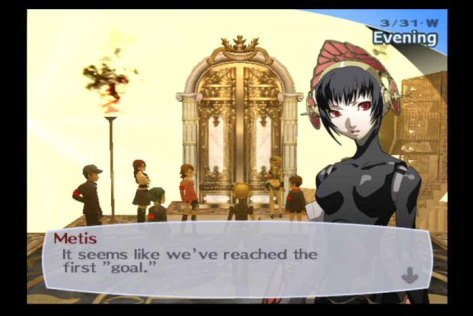 It was curiously akin to that feeling you get when you have no choice but to move far away from your family and friends, and you fear that you will never see most of them ever again. It was a genuine feeling of emotional attachment, in short, and a powerful example of why, years after its original release, Persona 3 is still one of my favorite games I have ever played.

One thought on “From the Archives: Bonds of People are the True Power”