I don’t play a lot of games on my phone these days, because a lot of them are touchscreen-controlled garbage, bad knockoffs of games that I didn’t really want to play in the first place or microtransaction-infested pits of misery and despair.

However, once in a while a game comes along with none of those issues. A game where you can pay once and just play it; a game where you’ll never see an ad, never be asked to pay again and not be bugged every ten minutes to “rate 5 stars on the App Store”.

And sometimes that game is even good! Here’s Take It Easy, by Ravensburger.

Take It Easy is an adaptation of a tabletop game first released in 1983. In its original incarnation, it’s a “multiplayer solitaire” game in which each player has a hexagon-shaped board and must fill it with hexagon-shaped tiles according to the numbers a bingo-style “caller” yells out. Each tile has three coloured stripes: one vertical and two diagonal. Each stripe is colour-coded and has a corresponding numerical value: “1” is always grey, for example.

Points are scored by constructing unbroken vertical or diagonal lines of the same colour across the board, with the exact number of points being determined by the number written on each coloured stripe. Making a vertical line of three using the yellow “9” stripes, for example, will net you 27 points. The aim is, quite simply, to score as many points as possible by the time your board is full.

If this sounds eminently suitable for adaptation to a computerised puzzle game, you’d be entirely correct. In fact, the electronic version arguably offers a superior, pacier experience than the tabletop version because there’s no looking for the right tiles, no requirement to wait for other people to finish their turn and no accidentally jogging the table and destroying everyone’s careful arrangements when you get up to relieve a sudden need to piss. 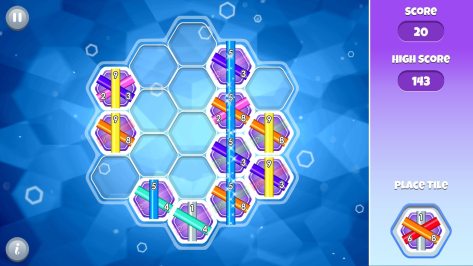 An adaptation of the basic game would have provided a great mobile puzzle game in its own right, since the inherent randomness ensures that each game is a little bit different. But the mobile version of Take It Easy doesn’t stop there. There are three additional ways to play!

The first of these to unlock is Puzzle mode, which presents you with a grid that has already been filled with tiles and tasks you with accomplishing one or more objectives. Typically this is at the very least ensuring a particular score is attained, but sometimes there are requirements to build a certain number of lines in a specific orientation, too, just to complicate matters.

In Puzzle mode, rather than putting tiles down yourself, you swap the existing tiles around until you create an arrangement that fulfils the conditions. This is a simple matter of tapping and dragging on the one you want to move, then dropping it on the one you want to swap it with. This initially feels a little clunky in that inimitable touchscreen sort of way — though is less of an issue if playing on a tablet rather than a phone — but soon becomes second nature.

Complete sufficient puzzles and you’ll unlock Progressive mode, which is probably the most substantial of the ways to play. Here, you have a sequence of time-limited levels that, like in Puzzle mode, require you to accomplish specific objectives. The difference here is that you’re putting tiles down rather than swapping them around, and filling the board without meeting the goals requires you to start the stage again.

There are two main “hazards” in Progressive mode. The first of these comes in the form of fixed, locked tiles on the board that are placed at the start of the stage and cannot be moved. The second is that some levels only allow you to place new tiles adjacent to tiles that are already on the board, limiting your movement somewhat. Sometimes these two elements are combined, and the results can be rather challenging, particularly in the later stages of the game — but occasionally you can tip the balance back in your favour with “wild card” tiles.

After clearing Progressive mode (good luck with that), you unlock Versus mode, which allows you to compete against your device for the best score. In this mode, you alternate placing tiles on the same grid, with the one who places the tile that finishes a stripe scoring the points for it. There’s a nice amount of strategy to this mode, and plenty of opportunity for screwing over your opponent. 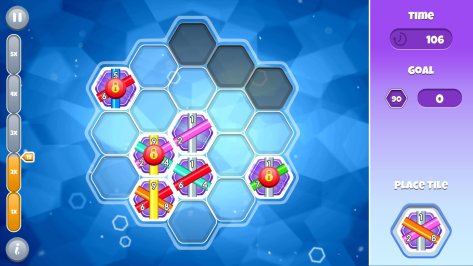 Which is why it’s good you can also play against actual other people as well as just your device! Take It Easy features a multiplayer mode where you can either play locally with other people using a single device, or use the online facility to play with other remote players; good luck finding a match without a pre-arranged opponent, though, since this game is a good few years old at the time of writing.

The whole thing is presented simply but nicely. There are three different tilesets available to customise the look and feel of the game, and there’s plenty of helpful audible and visual feedback to help you play. Stripes that can no longer be completed “fade out”, for example, to make it clear which parts of the board you should be focusing on and which can be abandoned as lost, and completed stripes are accompanied by pleasing visual sparkles and jangly sound effects. The whole thing is capped off with a pleasantly chilled out ambient soundtrack that just seems to say… well, the clue’s in the name, really.

Take It Easy has been a pleasure to rediscover recently. If you’ve grown cynical and tired of the modern mobile marketplace’s fetid stench of greed and general shitness, I encourage you to take a bit of time to check it out. Though do please note I will not be held responsible if people start to comment on your toilet visits suddenly taking a lot longer than usual…

More about Take It Easy