The Nintendo DS might not be the first place you’d think to look for some quality visual novels, but in actual fact Nintendo’s diminuitive and immensely popular handheld has played host to a number of interesting titles over the years.

As you can probably tell from the game’s Japanese title, Lifesigns (as we shall refer to it from now on to save my sanity) is actually the second game in a series that launched in Japan back in 2004.

Lifesigns does make reference to events that occurred in the first Resident Doctor Tendo game, which never saw a release outside of Japan, but these references are all explained well enough that the lack of an English language version of the prequel isn’t an issue.

It’s a shame we’ll probably never get the chance to play the original Resident Doctor Tendo in English (officially, anyway), as if Lifesigns is anything to go by it’s an interesting series that is well worth your time and attention, so long as you go in with the correct expectations. 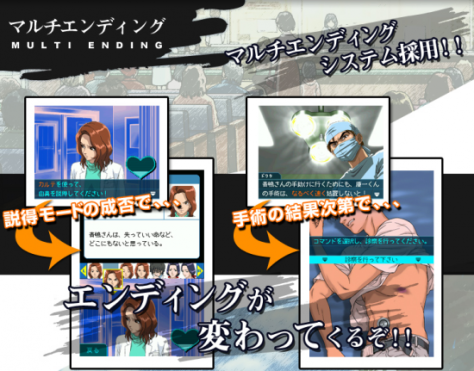 Let’s address those expectations before we go any further. Lifesigns is a game about being a doctor in a hospital, and occasionally requires the player to perform surgery on their patients. It is not, however, Trauma Center – a fact it suffered from somewhat upon its initial Western release, where it was widely criticized for having “too much talking” and not enough “gameplay” when compared to its contemporary. (In actual fact, the first Resident Doctor Tendo game predates the first Trauma Center by a whole year, fact fans.)

If you’re reading this column, however, you are probably already of the opinion that traditional “gameplay” and “fun” certainly isn’t the be-all and end-all of interactive entertainment, and that games about talking can be just as compelling as games where you’re playing a more active role in proceedings.

Specifically, in terms of execution, Lifesigns is closer to Ace Attorney than it is to Trauma Center, with the vast majority of your time spent moving between well-drawn locations talking to stylized, memorable anime-style characters about various subjects, while the plot for each of the game’s five episodes gradually advances as you engage in these various social interactions.

At various points in the plot, you’ll be required to perform diagnoses and surgical procedures on patients, and your performance in the latter in particular will often determine which of several endings to each episode you’ll see — or, if you mess up completely, whether your game ends entirely.

Unlike Trauma Center, however, the game is not structured with a mind to getting the player into the “action” as regularly and quickly as possible; instead, it’s very common that you’ll have several hours of nothing but talking followed by ten minutes of surgery. It’s this narrative-heavy structure which critics expecting a new Trauma Center considered to be “unbalanced” and, consequently, caused them to write off Lifesigns as somehow being a bad game.

Let’s look at why you should give this game a chance if you’re a fan of narrative-centric interactive experiences and visual novels.

Like Ace Attorney, we’re inhabiting a world which resembles reality, but which isn’t afraid to throw in heavily-stylized caricatures in place of more realistic characters. Tendo himself is probably the most normal of the bunch, following the frequently- (though not exclusively-) used visual novel trope of making the protagonist as inoffensive as possible in order to allow them to act as a cipher for the player.

That’s not to say he’s a silent protagonist or in any way flat, however — he has his own thoughts, anxieties and feelings on everything that unfolds (plus everything that apparently unfolded in the previous game) and he is most certainly fallible. It’s in his interactions with the other members of staff at the hospital where he works that the game really shines. 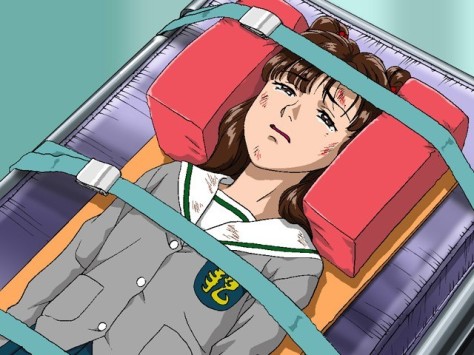 The game opens with a dream sequence in which we learn Tendo’s attitude towards several of his colleagues. We learn that he’s clearly harboring romantic and/or sexual feelings towards his mentor Suzu-sensei, and that he’s aware of nurse Hoshi’s attraction to him. As the game progresses, several other characters make an appearance, with probably the most important among them being first-year intern Aoshima, whom Suzu assigns to Tendo as a means of making him take a bit more responsibility.

Aoshima is one of the more realistically-represented characters in the game: she looks relatively “normal” rather than being a stylized caricature; she has very “human” reactions to things; and she’s the character who provides the closest depiction to what life for a real young doctor is like — stressful, tiring and often thankless. While she’s certainly got a degree of “fire” to her personality, she’s one of the more sympathetic members of the cast, and the early episodes do a good job of making you want to find out more about her. In many respects, she’s a character that we, as the Western audience, can latch on to more readily, since she, like us, is coming in to Tendo’s life when things have already happened.

While the majority of the “talking” parts of the game focus on Tendo and his relationships with his colleagues, this doesn’t mean that the patients get neglected, even outside of the diagnosis and surgery sequences. Indeed, through Tendo’s interactions with his patients, the game tackles some fairly weighty issues — single “parenthood” (well, actually a sister taking care of her younger brother) and other strained familial situations; androphobia; depression; suicidal thoughts; the teenage cult of celebrity — the list goes on.

While some aspects of Lifesigns are distinctly lighthearted and deliberately humorous, the game knows when to rein it in and get serious with some compelling, interesting and sometimes uncomfortable medical drama. And, pleasingly, there’s no guarantee that Everything Will Turn Out All Right thanks to a patented Dr Tendo Magic Bullet — each episode can conclude in one of several different ways, usually only one of which can really be considered a “Happily Ever After” sort of ending.

Sometimes people will die despite your best efforts; sometimes you could have done more and just couldn’t manage it; sometimes life just isn’t fair. Not only is it emotionally engaging to occasionally be slapped in the face with unexpected tragedy despite your best efforts, from a gameplay perspective it provides a considerable incentive to replay the game once you’ve finished. It’s also quite amusing that there’s an FAQ section in the game’s manual that explicitly points out the fact that each episode has several endings in case the person playing “isn’t satisfied” with the ending they get!

Lifesigns was a very pleasant discovery when I decided to take a chance on it — but it’s also a sad indictment of today’s Metacritic-centric reviews culture and how it doesn’t cater to everyone’s wants or needs.

Because of the game’s middling-to-negative Metascore (61 at the time of writing) it’s highly probable that a lot of people  – in some cases, even those who enjoyed Ace Attorney, which scored a much more positive Metascore of between 76 and 81 for the various entries in the series – passed up a chance to play Lifesigns.

In short, if you own a Nintendo DS and you’ve been looking for something to scratch that narrative-heavy itch (you should get that looked at) then Lifesigns is most certainly a very good use of your time.

3 thoughts on “From the Archives: Hospital Affairs”