Square Enix’s rebooted MMO, fourteenth mainline installment in the long-running Final Fantasy series and proof if proof were ever needed that you can polish a turd… by disassembling it completely and turning it into something totally different.

Should You Play Phantasy Star Online 2 When Final Fantasy XIV Exists? - Yes, it’s the question someone somewhere has probably asked at some point: with two highly regarded Japanese online RPGs on the go right now… is one “better” than the other? Well, let’s nip that one right in the bud from the outset: no, because they’re two rather different experiences from one another, and as such … END_OF_DOCUMENT_TOKEN_TO_BE_REPLACED

Waifu Wednesday: Anniversary Special - So, I wanted to do something a little bit different today, and I hope you’ll indulge me in a somewhat more personal post than usual. Today is the third anniversary of my marriage to my wife Andie, you see, so I thought it would be nice to show her some appreciation, what with said anniversary … END_OF_DOCUMENT_TOKEN_TO_BE_REPLACED

You Can Keep Your “Games as a Service”, I’m Fine with Single-Player, Thanks - EA’s recent announcement that it was shuttering Visceral and “pivoting” (ugh) the Amy Hennig-fronted narrative-centric single-player Star Wars project it had been working on probably didn’t come as a surprise to anyone. It did, however, rekindle a discussion that last cropped up back in 2010 — once again involving Visceral, interestingly enough, this time with … END_OF_DOCUMENT_TOKEN_TO_BE_REPLACED

Stormblood: The MMO as Musical Theatre - Video games aren't movies. They aren't musical theatre either, but that hasn't stopped Final Fantasy XIV's composer Masayoshi Soken from making incredible use of music throughout the game.

Stormblood: It’s a Great MMO, Too - Can a good Final Fantasy also be a good MMO? Yes, of course, and once again, Final Fantasy XIV has been proving that for years now. Here's how that worked in the context of Stormblood.

Stormblood: This Ain’t No Action RPG - Final Fantasy has a habit of reinventing its mechanics with each new installment -- and Final Fantasy XIV was, of course, no exception. In fact, Stormblood even reinvented some of XIV's base mechanics!

Stormblood: Introduction - Final Fantasy XIV has taken quite the ride ever since its launch, going from strength to strength with each expansion. Here, we look back at the history of the game up until the release of Stormblood.

Eorzean Diary: Lonely Explorer - One of my favourite additions to Final Fantasy XIV over time has been the randomly generated dungeon Palace of the Dead. I actually like it specifically because it’s one of the few pieces of content in the game that can legitimately be run solo while it’s still “relevant” to you. Other dungeons and Trials in … END_OF_DOCUMENT_TOKEN_TO_BE_REPLACED

Eorzean Diary: The Benefits of Being Left Behind - When I first started playing Final Fantasy XIV in A Realm Reborn’s open beta, I was keen to experience everything the game had to offer as soon as new things became available. There’s a benefit to this approach, of course: coming into new things “blind” when no-one else knows what to do either allows the … END_OF_DOCUMENT_TOKEN_TO_BE_REPLACED

When it works, The Hunt is fun; you get the chance to fight some interesting enemies in environments other than dungeons.

It may be chaotic now, but things are somewhat more civilised than they were when Hunts launched.

…and before long, there’s nothing but pyrotechnics all around. The ability to turn off other players’ effects is often welcome here!

Not an unusual sight: a large group of players gathering to take down an A-rank hunt monster.

Depending on your chosen class, you should be able to solo B-Rank Elite Marks if you come across them. You may wish to bring your chocobo along for support, though, since they’re not easy fights by yourself, even with good gear.

Deep in the Black Shroud… and, uh, without pants.

The scars of the Calamity are a potent reminder of days gone by.

If you’re yet to get a full set of item level 100 gear, the new Crystal Tower raid Syrcus Tower offers some tasty loot. You’ll have to contend with Xande here, though.

It’s nigh-impossible to get a good screenshot of The Hunt right now, so here’s my character sporting one of the new hairstyles added in 2.3.

Fight on, Warriors of Light.

Blizzard III. By golly you miss it if you don’t have it.

You’ll need friends to help you through tough challenges like the battle against Titan. But you don’t all have to be the same level. 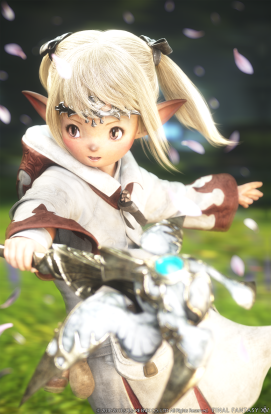 Don’t be fooled by how cute they are; Lalafell can be just as big a jerk as anyone else.

You can fight other players, sure, but the real fun comes in fighting the numerous story foes like the Imperials in their FFVI-inspired Magitek Armour.

But it’s all worth it when you get the chance to kick back and relax with your friends.

I’m more than happy to square off against Titan as a Black Mage, seen here; soon, I’ll have to take on the challenge as a tank.

FFXIV does a great job of making its most powerful foes — like Ifrit, seen here — seem genuinely threatening. This didn’t help my tanking anxiety.

“Growing up” as a healer in FFXIV means you’ll likely spend at least a short period wearing something along the lines of this embarrassing ensemble. It’s not long after that you get your authentic White Mage robes, though.