The MoeGamer Awards are a series of made-up prizes that give me an excuse to celebrate games, concepts and communities I’ve particularly appreciated over the course of 2017. Find out more here, but you’re out of time to leave me suggestions, I’m afraid!

Well, here we are on the last day of 2017, and I don’t know about you, but I’m feeling something of a sense of anti-climax after what has been an extremely chaotic and interesting year in many ways. Still, what better way to see out the old year than with a completely arbitrary declaration of what the “best” game of 2017 was?

This was an extremely tough decision, particularly as I’ve always said these awards were based on what I played in 2017, not necessarily what was released in 2017. But, as it happened, the two front-runners happened to both come out in 2017, so that all works out pretty nicely, doesn’t it? So which one did I pick? I’m sure you’re on the edge of your seats.

END_OF_DOCUMENT_TOKEN_TO_BE_REPLACED

There are certain games and series whose reputation precedes them. Of course, there are those series that are legendarily excellent — which, to be honest, I tend to find often sets you up to be disappointed and underwhelmed when you finally try them — but there are also those that are known for… less salubrious reasons.

Today’s award looks at something which I had held off trying for a while because I wasn’t sure I’d be into it… but subsequently it turned out to be one of my favourite things ever. That is, as they say, the way game chasin’ go… wait, that’s something else, isn’t it?

END_OF_DOCUMENT_TOKEN_TO_BE_REPLACED 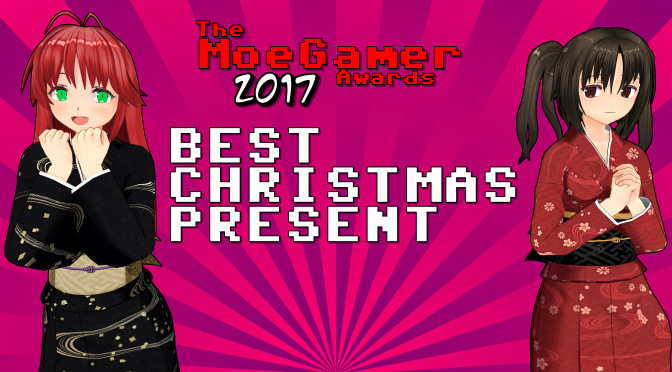 Welcome back, and I hope you’ve had a suitably restful Christmas break with good food, good company and, of course, presents.

Today I wanted to highlight a particularly awesome present I received. To be fair, I knew I was getting it well in advance of Christmas, so it wasn’t a surprise or anything, but it’s still awesome. And I somehow doubt I’m the only one to receive such a present this year, either!

END_OF_DOCUMENT_TOKEN_TO_BE_REPLACED

I love the fact that modern gaming is such an interesting, broad medium that it is possible to even contemplate something like the idea of a “Best Couple”. When I think back to the earliest games I played, and their mechanics-centric, narrative-free, abstract representations of various concepts and consider how far we’ve come, I get very happy indeed. Not that there’s no value in those old games or indeed modern mechanics-centric narrative-free experiences, of course; it’s just nice we also have the option to immerse ourselves in more narrative-centric experiences such as visual novels now.

There were a number of excellent candidates for the title of “Best Couple” from the games I’ve played and written about this year. But the more I thought about it, the more I kept coming back to one pairing in particular, so it ended up being a fairly easy choice.

END_OF_DOCUMENT_TOKEN_TO_BE_REPLACED

Today’s award, as you might expect, gives me an excuse to bring up a game that I haven’t really talked about this year, despite it being something that is eminently worth talking about. The reason I haven’t talked about it is pretty simple: I haven’t finished playing it, and as regular readers know I prefer not to write in detail about something without having a thorough understanding of it, usually by at the very least beating its main story.

The other reason I held fire is that there were a flurry of articles about it around the period of its release earlier in the year, and I didn’t want to add to that noise at the time. I do want to acknowledge it before the year is out, however, so that’s what today’s award is all about.

END_OF_DOCUMENT_TOKEN_TO_BE_REPLACED

Today’s award comes to us from the delightfully named “Garbage Weeb” via Twitter, also known as the host of At the Ebicentre and co-creator of Oppai Bros, both on YouTube. Check out these channels for an interesting mix of livestream discussion and commentary on the former and gameplay of niche and fanservicey games on the latter. Thanks!

There were actually a whole lot of different works I enjoyed this year that this award could have gone to. It was definitely a close-run thing, but I had to make a decision in the end!

END_OF_DOCUMENT_TOKEN_TO_BE_REPLACED

Today’s suggestion comes to us from Matt S, also known as @NightGuard_X on Twitter. Matt keeps a fairly low profile on social media but has been good enough to support the site for a long time; he’s also polite, articulate and always has interesting comments to make, even if he does have designs on the Purple Sister wallscroll in my study. You can’t have her!

Matt’s suggestions for his own personal Uncancel This Series award were Uncharted Waters and Monster Rancher, both of which are games I’m unfamiliar with, unfortunately, but I know they both have plenty of fans out there who would love to see them make a grand return. I have a feeling my choice may be quite a popular one, however…

END_OF_DOCUMENT_TOKEN_TO_BE_REPLACED

Today’s category comes from… well, me, because I wanted to write about it. I’ve really taken to collecting games over the last few years, particularly quirky, interesting or rare Japanese titles that don’t typically get a lot of attention — fodder to write about, in other words — and have spotted a few trends this year that may be of interest to those seeking to expand their own collection.

Specifically, if you’re not particularly attached to the idea of always being totally “current” with your game collection, or if you’re keen to see how far things have come (or not!) over the course of the last 20 years or so, these are the systems you might want to focus your collecting efforts on.

And the winner is… err, winners are…

END_OF_DOCUMENT_TOKEN_TO_BE_REPLACED

Today’s suggestion comes to us from “riobravo79”, who doesn’t appear to have a website or Twitter or anything — not that I could find, anyway — but left a comment on the initial awards post. Thanks; hope you see this!

Balancing narrative themes and mechanical interest is always a concern for those making a game with any more complexity than a “walking simulator”, visual novel or similarly story-centric experience. And it’s with this in mind that one of the most common terms bandied about by people who like to pretend they know what they’re talking about is “ludonarrative dissonance”, intended to describe the disconnect between the narrative themes of the story and what you actually spend your time doing in the game.

Some games handle this better than others. Some games don’t even attempt to handle it, combining abstract mechanics with a more realistic narrative. But some games do a wonderful job with fusing their narrative and thematic elements with how the game as a whole works.

END_OF_DOCUMENT_TOKEN_TO_BE_REPLACED 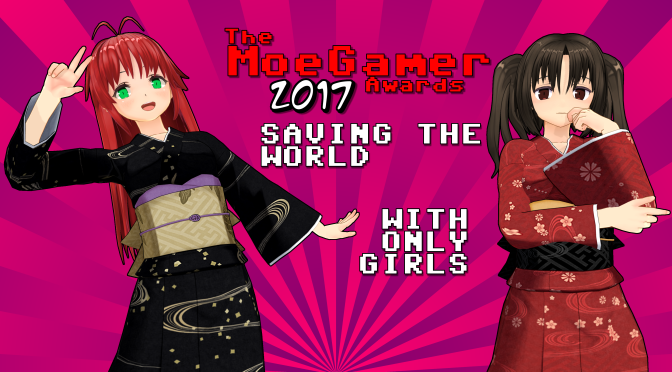 Today’s category comes to us from SoriasSire, who left some great ideas in the comments of this post just like you (yes, you!) should go and do right now. SoriasSire is also a longtime supporter of the site and Japanese gaming in general, so a hearty thank-you for your ongoing support!

It’s a popular misconception among people who don’t know any better (or do any research) that we have a shortage of badass female lead characters in video games, but nothing could be further from the truth — particularly in Japanese gaming. This award aims to celebrate an awesome example of an all-female ensemble cast that we’ve explored over the course of 2017.