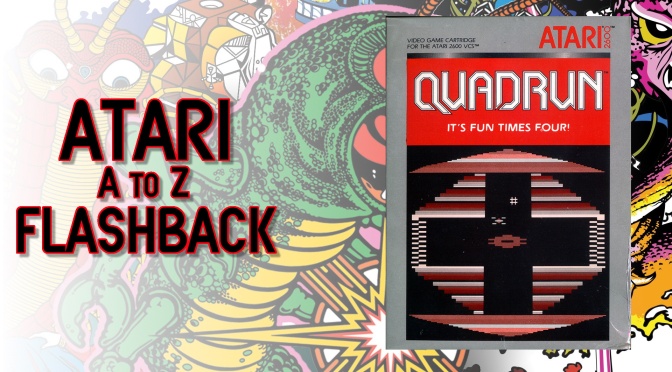 It’s fun times four with Quadrun, which is one of the rarer Atari 2600 games thanks to its original status as a mail order-only game for Atari Club members.

It’s a shame this didn’t get a wider release, because it’s an intriguing, unusual, experimental and rather fun game once you get your head around its core mechanics, which see you moving around four distinct quadrants of a playfield to dispatch enemies and rescue “Runts” from the dreaded electric toaster grids.

EA, lest we forget, stands for “Electronic Arts”. And back in this company’s early days, they really stood by that name, releasing a variety of fascinating, experimental pieces of work that were notably different from a lot of other games at the time.

One great example from EA’s initial batch of five games is Worms?, a take on a cellular automata model known as Paterson’s Worms. In the game, you control between one and four worms in an attempt to capture as much territory as possible by “programming” the worms’ behaviour.

It’s more of a software toy than a “game” as such, but there’s a lot of fun to be had here — particularly if you enjoy creating interesting patterns through judicious application of mathematics. Find out more in the video below, and don’t forget to subscribe on YouTube for more.

I love it when game developers get creative. This is not an altogether unusual sight these days, of course, but back in the early to mid ’80s, it was always a real treat to see someone step outside of genre “norms”.

Such was the case with Time Bandit by Bill Dunlevy and Harry Lafnear, a top-down action adventure with elements of text adventures, role-playing games, Pac-Man and all manner of other goodness. While superficially resembling Gauntlet — which actually came out after Time Bandit was fully developed — there’s a hell of a lot of depth here, and some fiendish puzzles to unravel.

If you want a game that pretty much sums up what the Atari ST gaming experience is all about, you can do far worse than give Time Bandit the, uh, time of day.