Type-in listings were a key part of 8-bit home computer culture, both in Europe and across the pond in the States.

The quality of games varied wildly, but it was always an interesting and satisfying experience to type something in to the computer’s BASIC interpreter, save it to a disk or cassette and have something you could enjoy at any time — just like something you’d bought from a shop.

Here’s an example from the latter days of Atari User magazine; a machine code type-in known as Maniac Mover. Check it out in the video below, and don’t forget to subscribe on YouTube for more. 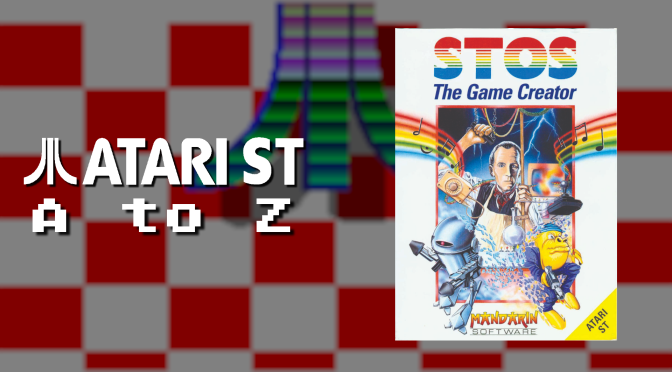 Mandarin Software’s STOS marketed itself as “The Game Creator”, but really it was a lot more than that — it was a whole programming language based on the conventions of BASIC, meaning you could do a wide variety of things with it.

One of the showcase titles included with the STOS package was Zoltar, a simple shoot ’em up that tasked you with taking down pre-scripted waves of aliens as they swooped, bobbed and weaved around the screen. As a game, it’s not great, but it’s a good showcase of what STOS is capable of — particularly as it includes a fully functional built-in level editor!

Check it out — and hear about my lost ST game ZAPP — in the video below, and don’t forget to subscribe on YouTube for more!

Type-in listings in computer magazines in the ’80s were more than just an opportunity to get some “free” software, with the only expense being the cost of the magazine and your time. They were also a chance to learn something.

In many cases, type-in listings were accompanied by commentary from the author explaining the processes and techniques they’d used in order to create the various functions within the program. In the case of Ants in Your Pants by Allan Knopp, published in issue 27 of Page 6, the technique in question was “page flipping” — a method of getting the computer to draw several screens in advance, then seamlessly switching between them to create the illusion of full-screen animation.

As a game, it’s fairly limited, but as a demonstration of some of the things it’s possible to do in Atari BASIC, it’s definitely worth a look!

Roguelikes are big business today, but they’ve been around for a long time.

Much like many early games, they originated as mainframe affairs that didn’t get home ports until much later, when ambitious programmers decided to see exactly what they could get their micros to do.

A-Rogue is what happened when Robert Jung decided to take the original Rogue and rewrite it in Atari BASIC for 48K Atari home computers. He did a pretty good job considering the limitations he had to work within!

The concept of the “video game auteur” is regarded as something of a modern thing, with Japanese creators like Hideo Kojima, Hidetaka Suehiro, Goichi Suda and Taro Yoko typically being held up as some of the best examples.

But back in the Atari 8-bit era, we had our fair share of recognisable names, too. Okay, they tended to be renowned more for technical ability and prolificacy than the artistic achievement and vision that tends to get celebrated today, but there were definitely “big names” working in both commercial and public domain software.

One such example of the latter was Stan Ockers, who is sadly no longer with us having departed this mortal coil in mid-2017. In the early days of home computing, Ockers gave us a wide variety of games and software composed in BASIC, initially published in the newsletter for Eugene, Oregon’s Atari Computer Enthusiasts user group and later in Antic and Page 6 magazine.

Today’s game, Vultures III, is perhaps not his best work, but is a good example of how he could harness the limited power of Atari BASIC to produce playable and addictive games — and, like most of his other creations, provided something for aspiring programmers and designers to study and learn from.