If you love a good shoot ’em up, you should find yourself some means of playing games for the PC Engine/Turbografx-16 (just “PC Engine” hereafter for simplicity’s sake). Konami’s PC Engine Mini is a great choice, as you’ll know if you’ve enjoyed our podcast episode on the subject.

Core to the PC Engine’s library of smashing shooters is Compile’s lineup of excellent blastathons, including three installments in the Star Soldier series, as well as spin-off title Blazing Lazers. It’s the latter we’ll be taking a look at today.

First released in 1989, Blazing Lazers remains one of the most popular, well-regarded games on the platform even today. So strap yourself in, grab that joypad and rev up your itchy trigger finger — we’re going in.

Blazing Lazers started its life as a licensed tie-in to the Japanese live-action movie Gunhed. References to the movie throughout the game were tenuous at best, though, so it wasn’t much of a stretch for the Western localisation process to completely remove all traces of the former license — apart from the name of the player ship, which remains as “Gunhed”.

The game was a collaborative production between Hudson Soft and Compile; interestingly, Compile’s name is relegated to a “cooperator” section in the credits rather than appearing prominently. The staff involved have a great pedigree, though; Compile’s director Masamitsu Niitani was the creator behind classics such as Zanac, The Guardian Legend and Puyo Puyo, while Hudson’s staff on the project included Mikio Ueyama, the director of the Super Bomberman series on Super NES, and Tadayuki Kawada, designer of the Japan-only DoReMi Fantasy for Super Famicom. 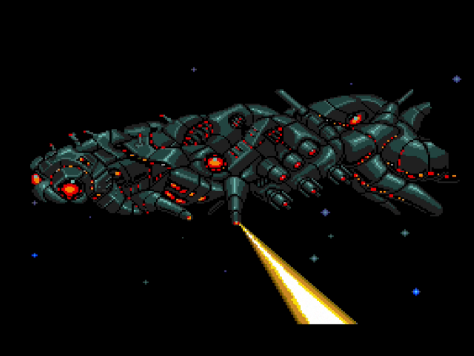 Blazing Lazers’ concept is that you are the obligatory lone star pilot capable of saving the universe in your extraordinarily powerful but exceedingly fragile spaceship, and this time around it’s the turn of the dreaded Dark Squadron to get shot at. Ahead of you stretch nine vertically scrolling stages, each featuring both a mid-boss and an end boss, and it’s up to you to blast everything in your path on your way to take down the Dark Emperor and give the human race a bit of peace and quiet until you boot up the next shoot ’em up.

Like many shoot ’em ups, Blazing Lazers distinguishes itself through its power-up system. Here, you have four possible main weapons for your ship — the “Photon Blaster” fires bullets in multiple directions; “Power Wave” allows wide-range attacks; “Field Thunder” shoots powerful, constant beams; and “Ring Blaster” combines a narrow-range bullet cannon with rapidly rotating rings around your ship that can take out enemies and cancel bullets. 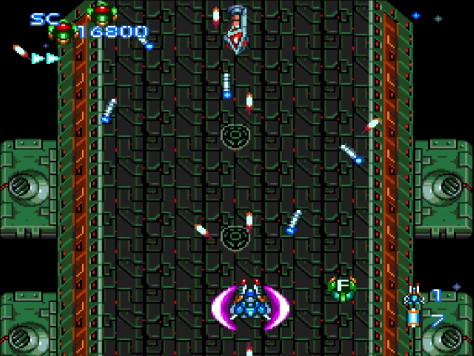 Each main weapon is represented by collectible icons with Roman numerals on them. Collecting the same numeral as the weapon you have at present will power it up — usually increasing the amount of area you can cover with it — while collecting a different numeral will switch to a new weapon. You can also power up your weapon by collecting purple “gel” items that some enemies drop, though each new level of power-up requires twice as many of these gels as the previous.

Blazing Lazers is quite fond of throwing power-ups at the player, so a significant part of succeeding in the game is understanding that greed is a sure route to your own downfall. Instead, it pays to focus on a single weapon type that you find particularly appealing and attempt to maximise its power as much as possible in time for the stage’s two boss encounters.

There’s another consideration, too, which is the fact that as your main weapon powers up, small shields form around the outside of your craft. This allows you to take glancing impacts from enemies and bullets without being destroyed, but you will lose weapon power (accompanied by a “ting!” sound you’ll come to dread) when this happens. It can make the difference between life and death at times, though — which is good, because Blazing Lazers is, with one important exception, a game that sends you back to a checkpoint when you die, rather than just allowing you to “brute force” your way through the game with enough lives.

That exception comes in the form of flashing gels that occasionally appear. These appear from power-ups that otherwise cycle around through different weapon types; these can either be shot repeatedly — which temporarily freezes the options they cycle around while you do this — or allowed to drift down to the bottom of the screen and back up again. Regardless of how it appears, a flashing gel obliterates everything on the screen when you collect it, and also awards you with an instant respawn the next time you lose a life rather than sending you back to a checkpoint. These can actually be stocked up, meaning you can respawn your way through the tougher later stages if you can make it through the earlier ones without losing a life.

This is, of course, easier said than done, but the whole experience of playing Blazing Lazers is such fun that you won’t mind putting in the practice required to see the later levels. The combination of the lovely pixel art, the stirring music, the crunchy digitised sound effects and the well-choreographed enemy patterns will keep you coming back for more — and, as always with arcade-style games developed for the home rather than the arcade, the difficulty balance is is paced in such a way that even shoot ’em up newcomers will be able to make it through at least a few levels before encountering a challenge they’ll need to put a bit more work in for.

If you’re yet to explore the PC Engine’s library in earnest, Blazing Lazers is a great place to start. It’s a highly representative example of both what to expect from the platform in general, and some of the best of what Compile and Hudson had to offer, too.