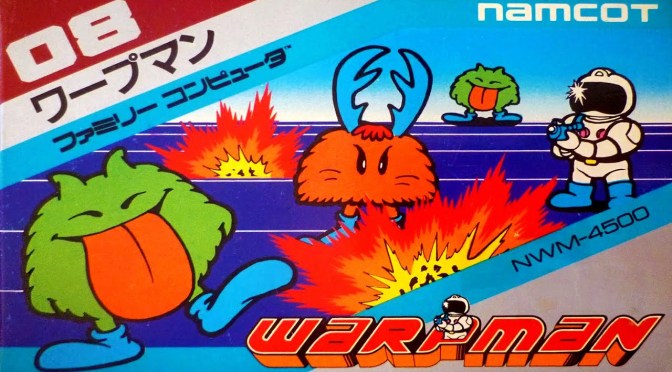 A great example of this can be seen on the Namco Museum Collection 2 cartridge. Have you ever heard of Warpman? Chances are, unless you collect Famicom games, probably not; it’s a 1985 Japan-only sequel to a fairly obscure 1981 Namco arcade game called Warp & Warp, also known as Warp Warp for its North American release.

Warpman (and, by extension, Warp & Warp, which it closely resembles in gameplay terms) is a particularly interesting game, because it introduces a specific mechanic that, today, is more commonly associated with a later game from a completely different company. But Namco did it first! So let’s take a closer look. 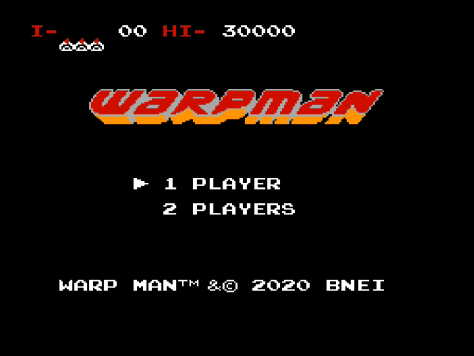 In Warpman, you take on the role of “Monster Fighter”, an astronaut-like dude packing some heavy weaponry and the ability to freely walk around in space. Your job is simple: eliminate a quota of enemies from each stage in order to move on to the next. As you defeat enemies, icons representing your remaining targets will gradually disappear from the side of the screen; when there are no icons left and you clear the screen, the level is over.

This is a structure Namco made use of in a fair few of its games, probably most notably 1980’s Tank Battalion and its various follow-ups such as 1991’s Tank Force. In all these games, the fact that there are more enemies to destroy than appear on stage at any one time adds a bit of light strategy to the experience; do you simply blast away with survival in mind, or do you observe where the new enemies spawn from and attempt to manipulate their positions to your advantage?

Warpman adds an additional, optional twist atop the basic shooting action to allow veteran players the opportunity to score more points. By choosing your targets carefully and eliminating three of the same type and colour of enemy in a row, a special enemy will spawn and provide significantly more points when shot. They don’t last long, however; unlike the regular enemies, which tend to start around the outside of the screen and gradually wander a spiralling path inwards towards the centre, these special enemies start at a corner, run along a single side of the screen and then disappear again, so you’ll need to drop everything and blast them if you want to enjoy their delicious points. 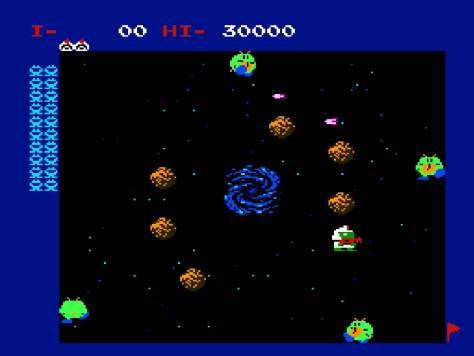 And there’s more, too. While it is possible to play the game entirely as a four-directional arena shooter, you can also jump into the game’s other “mode” any time the black hole in the centre of the playfield starts glowing — usually after you pick up a power-up. Whenever you do this, you move from the open arena of space into a more maze-like area. Here, you’re not able to shoot; instead, you drop timed bombs behind you which, by default, send out shockwaves vertically and horizontally for a short distance from their origin — and yes, these can kill you.

Sound familiar? Yep, Namco did Bomberman long before Hudson did, since these mechanics were present and correct in 1981’s Warp & Warp, and the first Bomberman didn’t appear until 1983. Regardless, the two games became (and remain) distinct from one another, what with Warp & Warp and Warpman’s focus on single player battles against enemy hordes, while Bomberman’s most successful incarnations went the competitive multiplayer route.

It’s not identical to the mechanics of Hudson’s later classic, either. You can power up your bombs in Warpman, but rather than making the shockwaves longer, this instead makes them explode in a circular blast that passes through walls rather than remaining confined to the horizontal and vertical passages of the maze. This makes it much easier to take out enemies by catching them in the blast — but also a lot more dangerous for the player, particularly as some enemies are capable of picking up these powered-up bombs and carrying them in your direction! 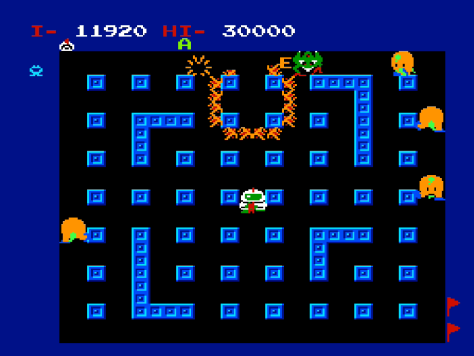 Interestingly, the power-up mechanic in the game encourages engaging with both the space-based arenas and the maze bombing action, since collecting one provides you with improved weaponry in the mode you’re not currently playing. In other words, pick up a power-up in space and you’ll need to jump into the black hole to enjoy the more powerful bombs; likewise, pick up a power-up in the maze and you’ll need to bomb a portal to get back out into space in order to enjoy your improved blaster cannon. Improved in that it causes the same dangerous explosions that the improved bombs do, so stand well back before firing!

Namco could have easily just tried to create a Berzerk clone with Warp & Warp and Warpman, but instead they incorporated some very creative, interesting twists on the basic arena shooter formula of the time, and ended up with a memorable, enjoyable game that it’s a crying shame we’ve never seen in the West until now. 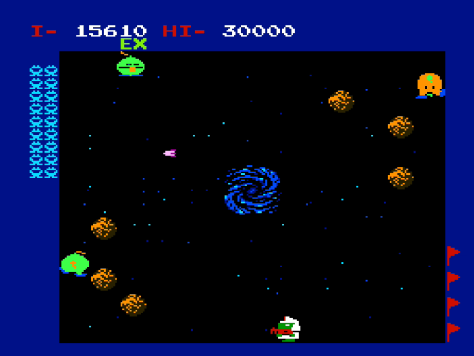 But, as I said at the start, that’s partly what the Evercade is all about: celebrating not only the all-time classics of gaming that everyone in the West is familiar with, but also highlighting some of the interesting stuff that many people might not have come across before unless they’ve been involved with the import scene over the years.

It may be thirty-five years late, but finally we can enjoy Warpman in an official capacity. And now I’ve finished writing this, I think I’m off to go enjoy it a little bit more!

One thought on “Warpman: Another Lost Namco Treasure”