Those of you who have been following for a while may recall that friend of the site Matt Sainsbury from Digitally Downloaded has been beavering away at a series of visual novels based on his site mascot for a while now — you can read about the first one here.

I finally got around to making some time for the second volume — and a look at the third one will be following shortly! — so I figured it’s high time we talk about it. Because, much like its predecessor, it does an excellent job of raising some interesting and relevant talking points without becoming preachy about it.

Volume 2, subtitled Meet Lo and Nettie! focuses on the topic of the male gaze, which is a term bandied about so often these days that its original meaning has become somewhat obfuscated. Let’s see if three cute girls can sort that whole mess out, shall we?

Much like the first My Time With Dee Dee game, Meet Lo and Nettie! (as we shall refer to it hereafter) opens with you naming the protagonist. Rather than providing a completely freeform self-insert protagonist, our hero is definitely canonically male this time around. And before anyone starts complaining about “inclusivity”, this is very obviously an entirely deliberate choice that allows the protagonist, on numerous occasions, to act as a practical example of the male gaze at work.

Indeed, one might argue that the restriction of the protagonist to being a heterosexual cisgender male is an example of the male gaze in and of itself — but once you’ve seen the commentary this visual novel has to offer, it’ll be abundantly clear that Sainsbury knows exactly what he’s doing. 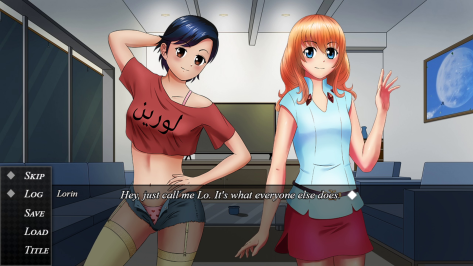 Again like the previous title, the narrative setup is that “you” and the eponymous Dee Dee have been given an assignment by your eccentric professor to research and deliver a presentation on a rather vaguely defined subject — in this instance, the male gaze. You and Dee Dee are not provided with any information beyond that, so this leaves the narrative open to explore the subject matter from several different angles.

This time around, those angles are represented by three different characters: Dee Dee herself, Dee Dee’s sister Nettie, and their friend Lorin. The game provides you with a virtual long weekend to spend with the girls as you see fit, and the final outcome of your presentation with Dee Dee depends on the choices you make along the way coupled with the understanding of the topic both you and the protagonist develop along the way. 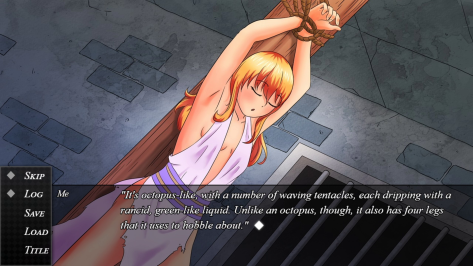 The first way in which the idea of the male gaze is explored comes in the protagonist introducing the three girls to tabletop roleplaying. As the narrative develops, Dee Dee’s character is caught in a trap, and the opportunity presents itself for you to either follow through on the story you’d originally planned, or to go easy on the newcomers. There are things to be learned by going in either direction, to be sure, but it’s not hard to figure out what the “correct” choice is.

This pretty much sets the pattern for the rest of the visual novel. Various binary decision points tend to provide the opportunity to either be a bit of a skeezebucket or do something a relatively normal person would do; while you tend to get a bit of a tonguelashing (and fuck up your assignment) for taking the sleazier options, they’re more than just instant bad ends and are worth exploring for the additional commentary they offer along the way.

In other words, the girls’ natures can lead you into a bit of a false sense of “security” at times, and lead you to believe that making an overtly sexual choice on behalf of the protagonist is a good idea. Spoiler: it isn’t, at any point, and that’s part of the point that the novel as a whole is making.

It’s worth pointing out that this is not the same as saying that men cannot be sexual. Both the main novel itself and the optional “Teach Me, Professor” commentary feature make a point of noting that the concept of the male gaze is not, in itself, a problem — it’s the actions that result from the male gaze that are the things we need to look at carefully. Just because you learn a girl you just met is “a bit of an exhibitionist” — a fact driven home by the fact that her shorts are unbuttoned and you can clearly see her panties — it does not mean that you should, say, include a tentacle rape scene in her first ever tabletop roleplaying experience.

At its most fundamental level, the various narrative paths through Meet Lo and Nettie! are about mutual respect, honesty and understanding one another’s boundaries. Despite the protagonist providing potent examples of the male gaze at work on numerous occasions throughout the storyline, he’s actually the character with the least amount of power in the story, because any time he follows through on that male gaze with something that is clearly, obviously completely inappropriate for civilised society, he is well and truly put in his place — often with consequences that are implied to be permanent. 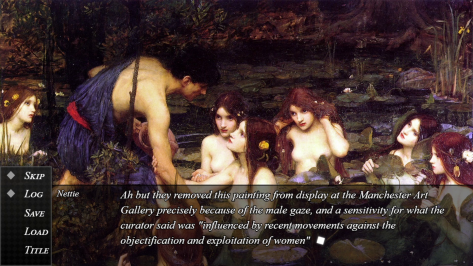 Of course, with this being a visual novel, those consequences aren’t permanent since you can just save and try again, which is what makes the medium a great means of exploring subject matter like this. You can explore the negative consequences of behaving in a particular way, learn from those mistakes and understand how you can do better.

And that’s the important nuance that a lot of online discussion surrounding this sort of subject matter tends to lack. So-called “debates” on this subject tend to deal in extremes, whereas the reality of the situation is much more complex and interesting — and that’s something that Meet Lo and Nettie! really nails. It even takes the time to address and criticise how a significant proportion of left-leaning individuals have begun to resemble stereotypical, Puritanical right-wing attitudes towards art — and how this has already had a tangible impact on art and culture.

The key point is that people are complex, but there are also fundamental realities about them that it doesn’t do any good to either ignore or, worse, demonise. Instead, much better that we ask how we can embrace those inalienable fundamentals while ensuring no-one ends up exploited or hurt, eh?

More about My Time With Dee Dee

3 thoughts on “My Time With Dee Dee, Vol. 2: Learning to Love the Male Gaze”