One thing I feel like we’ve lost somewhat over the procession of console generations we’ve lived through is a feeling of “uniqueness” for each platform.

Sure, Nintendo still does its own thing and its games are immediately recognisable, but I’m talking more about a very clear look, sound and feel of games on a specific platform; partially a product of the hardware itself, and partially that of the companies specifically choosing to produce work for that platform in particular.

I hadn’t really spent a lot of time with Super Castlevania IV for Super NES until recently, but within about five minutes of delving into it in earnest thanks to the Castlevania Anniversary Collection for Switch, Xbox One, PS4 and PC, I’m absolutely convinced that it is the perfect example of what a SNES game really “is”.

There are a number of aspects to this. Firstly and most obviously are the presentational aspects. The SNES had a larger colour palette and a higher maximum resolution than its contemporary, the Sega Mega Drive/Genesis, meaning that SNES titles often prided themselves on being packed with subtle details made possible by the wider range of possible on-screen colours at once.

This is very much in evidence throughout Super Castlevania IV, with its parallaxing backgrounds giving a wonderful sense of time and place to the locales through which you trudge on your way to give Dracula a good whipping. And this isn’t even touching on its use of the SNES’ “Mode 7” scaling and rotation capabilities; we’ll save that for another time. 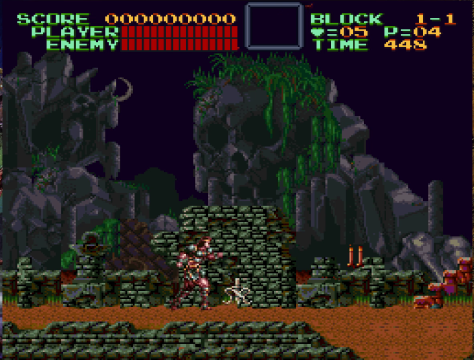 Even more obvious than the graphical disparity between the Super NES and the Mega Drive is the difference in their sound chips. While the Mega Drive’s Yamaha YM2612 chip produced clear, crisp FM synthesis with a very distinctive sound to it, the Super NES’ custom Nintendo S-SMP sound module, meanwhile, made use of a system called wavetable synthesis, which was capable of using actual instrument samples rather than synthesised waveform approximations.

The result was that SNES soundtracks often sound more “warm” and “full” than many Mega Drive soundtracks — though the tradeoff was that the heavy use of samples could sometimes result in a somewhat “muffled” sound compared to the clarity of Sega’s system.

As always, there are exceptions to both of the above characteristics — and before the more passionate Sega enthusiasts get angry, I’m not saying the Mega Drive is “worse”, because Mega Drive programmers were masters of getting the most out of that hardware! We’re specifically concerned with Super Castlevania IV here, and these descriptions very much hold true, which is a big part of why I feel like Super Castlevania IV is one of the most representative examples of a SNES game out there.

Along with the technical specifications of the hardware producing the music, the actual compositional techniques used varied between the Mega Drive and the SNES, too. While the SNES certainly wasn’t short of bouncy, jolly, happy tunes in Nintendo’s more colourful titles such as Mario and Kirby, that wavetable sound chip was ideal for producing more atmospheric soundscapes than had been possible on earlier audio hardware.

Many people will point to Kenji Yamamoto’s seminal work on Super Metroid as a prime example of this, but Masanori Adachi and Taro Kudo’s Super Castlevania IV soundtrack predates it by a good three years, de-emphasising the usual “melodic hook” approach to video game composition in favour of rich, thick harmonies, contrasting instrument timbres and a distinct sense of audible personality to each area you visit.

Not only that, hints of inspiration from Adachi and Kudo’s work can be heard in many later SNES games — Nobuo Uematsu’s 1994 soundtrack for Final Fantasy VI makes heavy use of a similar upright bass sample to that heard in Super Castlevania IV’s music, for example, and both use this to contribute to a somewhat “atmospheric jazz” feel in certain parts of their respective games. This style of music is very much an iconic part of the SNES’ audible identity, blending feelings of both nostalgia and modernity. 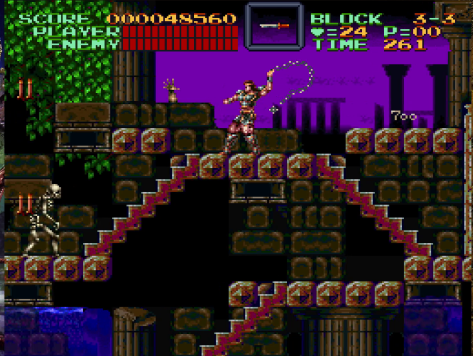 There are more subtle aspects of Super Castlevania IV that very much make it feel like the quintessential SNES game, too. Most notably, the first stage acts as an interactive tutorial without ever saying a word to the player; instead, the nature of its design gradually introduces various mechanics and possibilities and invites the player to determine the most effective way to tackle various situations.

Probably the best example of this is the sequence where you enter the stables. The first candle in the area provides you with the holy water item, and the Viper Swarm enemies you encounter immediately afterward drop from the ceiling and then slowly creep across the floor below the normal level of your whip attacks. This, naturally, makes them ideal holy water fodder, since this item works by you throwing it in a low arc in front of you, then it burning for a few seconds.

It doesn’t stop there, though; after dealing with a few Viper Swarms, you’re subsequently confronted by the “Mr. Hed” severed horse-head enemies, which remain dormant on the floor until you approach. If you anticipate their quick movement towards you, you can toss down a holy water and they will slide right into it before they get anywhere near you; fail to do so, however, and they’ll take flight after a while. In fact, even if you successfully deal with the first couple of Mr. Heds immediately, the last one starts on the ceiling and thus immediately takes to the skies, educating the player as to what to expect from this enemy even if they never reached that particular mechanic through their own incompetence or inaction.

This approach to “learn through doing” is very Nintendo; Super Castlevania IV is a Konami game, obviously, but at the time it was released, this was still a franchise that was heavily associated with Nintendo platforms so it made a lot of sense for the team behind it to follow Nintendo’s design principles. Those playing on the SNES would have come to expect them by this point, after all, especially as one of the most “Nintendo” games of all time — Super Mario World — was a pack-in game for many system bundles.

One might think that a stereotypical “Nintendo fan” might not be ready for the stiff challenge that Super Castlevania IV offers, what with Nintendo’s output often being regarded as “family-friendly” or aimed specifically at children these days. But remember that the term “Nintendo Hard” is a thing for a reason, and Super Castlevania IV certainly doesn’t disappoint in that regard.

But that’s probably a story for another day. For now, just remember that if any young whipper-snappers ever ask you what the SNES was like, Grandad, just fire up a copy of Super Castlevania IV, and you’ve got one of the most representative examples of a SNES game right there ready to enjoy. Just mind your language when those Medusa heads come a-bobbin’.